“The Krusher,” according to Ward, no longer exists. The retired Ward believes the version of Kovalev that earned that nickname – the man he edged by unanimous decision and then beat by eighth-round technical knockout – would’ve been much more difficult for Canelo Alvarez to handle Saturday night at MGM Grand Garden Arena in Las Vegas.

Since Ward’s second victory over Kovalev, however, the Russian veteran has been knocked out by Eleider Alvarez and had to overcome serious trouble to stop Anthony Yarde in the 11th round of his last fight. Kovalev came back to out-box Eleider Alvarez in their 12-round rematch February 2 and knocked out Yarde with just a jab August 24. 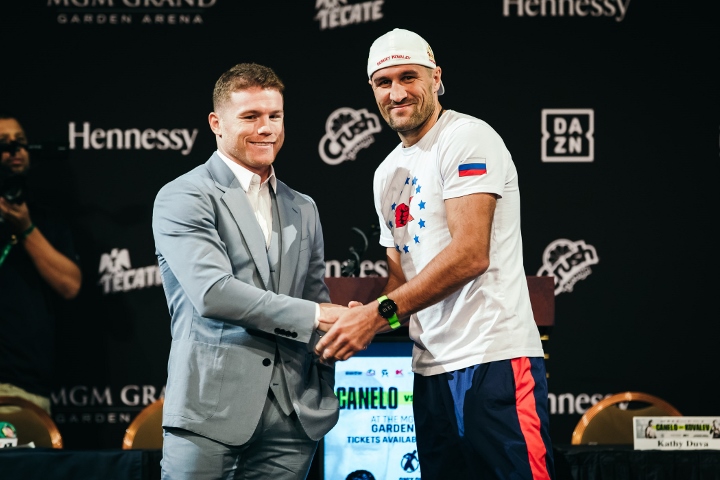 Colombia’s Alvarez and England’s Yarde were undefeated when Kovalev beat them.

Nevertheless, the Alvarez he’ll encounter Saturday night is Kovalev’s most formidable foe since he faced Ward. Mexico’s Alvarez (52-1-2, 35 KOs) is four inches shorter than Kovalev (34-3-1, 29 KOs) and has moved up two divisions to challenge the WBO light heavyweight champion, but Ward would be surprised if Kovalev wins.

Ward primarily is skeptical of Kovalev’s chances because he doesn’t see the same fierce fighter he fended off twice. The ESPN commentator broke down the Alvarez-Kovalev fight for a group of reporters following Shakur Stevenson’s unanimous-decision win against Joet Gonzalez in a WBO featherweight title fight Saturday night at Reno-Sparks Convention Center.

“I didn’t see the big right hand against Yarde,” said Ward, who is Stevenson’s co-manager. “Watched the whole fight. I called the fight. I didn’t see it. Saw a good jab, but I saw an aging fighter. I saw a fighter who doesn’t have the confidence he once had. And he’s no longer ‘The Krusher.’ It’s no knock on him. He’s Kovalev now. He’s Sergey Kovalev. There’s a difference. That guy’s long gone. He’s been long gone. So, Canelo’s fighting Sergey Kovalev. Still very formidable. Still solid. Still dangerous. But he’s not that guy anymore.

“The first six rounds are gonna be very interesting. The best I think Canelo can do is get out of there 3-3, 4-2, even if he’s, you know, won two rounds and Kovalev won four, and then step it up that last half of the fight. But Canelo’s gonna have to be in the lion’s den to get the work in that he wants to get in.”

The risks aside, Ward expects Canelo to do damage to Kovalev’s body. He’s not convinced, though, that Kovalev can make Alvarez pay by landing body blows of his own.

“I heard Buddy McGirt say that, you know, Kovalev’s gonna hit to the body,” Ward said. “But Kovalev has never hit to the body. He’s not trained like that. That’s not his foundation. So, it’s late in the game to try to teach this man to start hitting to the body. He may land some [body] shots, but he gonna be in range to get hit. It’s too late for that.

“So, you may be able to teach him one or two things, like, ‘Hey, stick him down there.’ But an all-out body attack, he gonna get hit, hit more. So, I’ve gone back and forth. I can see Canelo stopping him late. I can see it being a close fight. If I had to choose, I’m gonna go with Canelo late. Or maybe even a decision.”

He is right, anyone with 2 working eyes and can kov hasn’t been the same since the 2nd ward fight

Funny read. They guy nailed it. Some of the dumbasses in here that were crying and screaming like children should learn from this but, they never do. They are too obsessed with hate and believing what they wanna believe.

[QUOTE=Nomadic;20158779]Which part of what he said about Kov is B.S.? Let's hear your opinion?[/QUOTE] Body shots. No U.S. commentator for that matter mentioned them from Kov. [url]https://www.youtube.com/watch?v=psE7E5G7zks[/url]

Quote: Originally Posted by PunchyPotorff View Post Yeah like I said elsewhere... this is easily the most pathetic fighter rundown by Ward I've ever seen. Kovalev landed a BUNCH of body shots on Yarde. And here's Ward PRAISING Kovalev: Andre…

[QUOTE=pittapatta66;20160649]you assume too much, unbiased my ass you sound like one of the typical wrard nutsuckers. ward won the second fight, but the fact there were so many low blows will ALWAYS be brought up. you use illegal tactics in…