After nearly 14 years in the pro game, Andre Berto doesn’t get taken in by the pomp and circumstance of a big main event fight anymore. These days, he’s all about getting on a plane and getting to the fight as soon as possible.

“Yeah, I think that’s where we are nowadays,” he laughs. “We’ve done this for so long, it’s like, ‘Okay, all the work’s been done, let’s get to it.’ All the young boy excitement just to see things, that tends to dim out a little bit because we’ve been to that stage plenty of times. So we’re ready to just go to war.”

On Saturday, Berto makes the walk to the ring for the 37th time in a FOX-televised main event against Devon Alexander at NYCB Live: Home of the Nassau Veterans Memorial Coliseum in Long Island, New York. For the 34-year-old former welterweight champion, it isn’t about titles or the “big” fights anymore. It’s about pulling off the rarest of feats in boxing: leaving the sport on his own terms.

Berto almost did that in April 2016, when he avenged his 2011 loss to Victor Ortiz with a stirring fourth-round knockout.

“I almost walked away after the Ortiz fight, which a lot of people don’t know,” he said. “That Ortiz fight, I said, ‘Okay, that’s the one I wanted.’”

But almost no one leaves on a win like that. When you’re back on top of the world, it’s hard to go back to civilian life. So Berto got an offer to face Shawn Porter in April 2017 and got stopped in nine rounds, only the second knockout loss of his career. And he wasn’t leaving on that note, but he did take time to regroup.

“After the Ortiz fight, I said I’d stay on for a little bit and it’s that competitive nature where I said let’s try to get another world title before we leave,” he recalled. “But the Porter fight was just messy. A lot of headbutts, just a messy fight. It didn’t sit right with me. So I took time off, spent time with my family and prayed about it.” 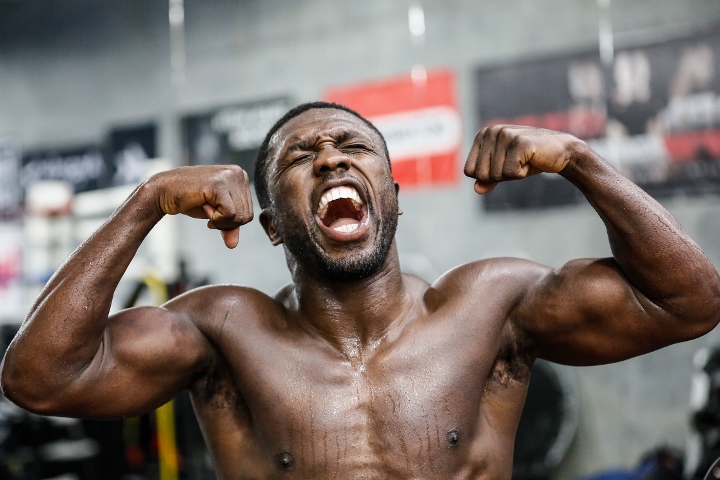 Berto always stayed in shape in the ensuing year after the loss to Porter, and he was offered return fights, but his response was always, “I’m cool right now.” Then came the offer to fight Alexander, and it was time to return.

“I felt like they brought the right situation to me and I felt great,” Berto said. “I had a chance to heal up and take that time to rejuvenate my body and I’m still hungry for it. And it’s not hungry thinking that I’m gonna go for a run. It’s the hunger that I want to finish how I want to finish out. It may be one, it may be two, whatever the case may be, but that’s the motivation and the push now. I know I’m gonna close this book and I want to finish it off in a certain kind of fashion.”

Maybe the way his friend and gym mate Andre Ward did it. Both entered the pro game after appearances in the 2004 Olympics, Ward for the United States, Berto for Haiti, and both enjoyed longevity in the pro game that many of their peers from the amateur days couldn’t match.

“We (Berto and Ward) were just talking about that in the gym the other day,” Berto said. “There was a kid who came in the gym from Australia and he was asking questions. He said how does it feel to be in the top ten in the world for 14, 15 years? That’s crazy. It’s a testament to what type of athletes we’ve been for so long. We’ve seen a lot of hot prospects, hot world champions, and two, three years later, you never hear from them again. So just to be able to go through life’s battles, not just in the ring, but outside the ring, and still be relevant and still have that good weight to your name is a blessing.”

Berto has earned his place in the annals of the sport for a career well fought. There were championships, several title defenses, memorable wars and even the spectacle that goes along with a fight against Floyd Mayweather. Berto didn’t always come out on top, but he always showed up to fight. And there’s something to be said for that.

Having covered his career since before the Olympics, I belatedly congratulate him on the tenth anniversary of his first title-winning effort against Miguel Angel Rodriguez in 2008.

“Damn, that’s crazy,” he laughs. “Ten years? Time flies. It feels like it just happened three or four years ago.”

Berto is still a young man at 34 – soon to be 35 in September – but as he enters the final stages of his career, he is entitled to get a little nostalgic. He recalls looking at a recent social media post from his amateur days.

“There’s maybe two of us still out here from that picture,” he laughs. “Where did everybody go? It’s like high school.”

Andre Berto is still here, still fighting, still hungry. But he won’t be here forever. And he’s smart enough to know that.

“I’m fortunate enough to still be able to do it, still be healthy and still be able to speak intelligently and still have all my wit,” he said. “When you’ve been in this boxing game for a long time, you see a lot of people come and go. And at this point, it’s going to be the satisfaction of leaving the way I want to leave and to finish out this career strong.”