Andrade Warns Saunders: I'll Follow Your Fat Ass Up To 168!

As previously reported, Billy Joe Saunders and Shefat Isufi will go head to head for the vacant WBO super middleweight title on April 13.

Saunders was crowned WBO king at middleweight in late 2015, completing three successful defences of his strap before vacating it in October last year, having failed to receive a licence to box in Boston against Demetrius Andrade. 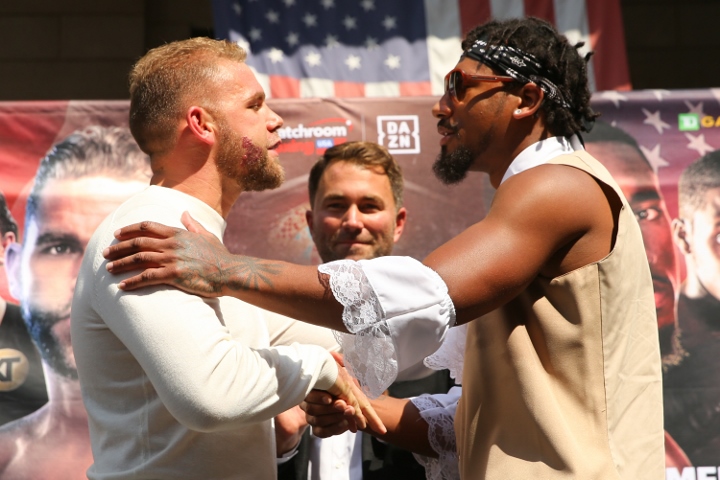 Saunders (27-0) did return to the ring in December after a year out, defeating Charles Adamu in Manchester, and has now set his sights on becoming a two-weight world champion as he prepares to take on Isufi, who has a 27-3-2 career record.

The announcement comes unexpected, as the WBO had recently ordered Andrade to make a mandatory defense against Saunders.

Despite the new announcement made by the WBO, Andrade has not forgotten about Saunders.

"Hey Dominic Ingle looks like you and Billy Joe Saunders are the ones that need to man up mates!! All the talking & PED using, and now you straight up duckin! Where are all the 'Bully Joe' fans now? I’ll follow your fat ass right up to 168, and take that title from you," Andrade stated on social media.

Saunders apparently was not happy with the WBO's mandated financial split for the Andrade bout.

"You've got these rumours that Andrade is going for shoulder surgery, as well as the financial side of it with the [purse] split – it all doesn't add up," Saunders said.

"Me winning this super-middleweight title will put me in a great position for unifications with the likes of [WBA super-middleweight champion] Callum Smith, while we've got Chris Eubank boxing James DeGale at the weekend [for the vacant IBO belt].

"There are a lot of big, big fights at this weight, but my real home of homes is middleweight, so I can move down at any time I want and be back as mandatory for my middleweight title and then become a three-time world champion."

It's a funny line but no chance, he staying at 160 where there is more money and bigger fights.

I bet he wont.

[QUOTE=robbyheartbaby;19530334]As opposed to all the live bodies Andrade has fought? Saunders has wins over Lee, Lemieux, Eubank Jnr and Monroe what the f*** has Andrade done?! Gone life and death with Vanes Martirosyan & Jack Culcay![/QUOTE] Yeah try they're both…

bjs is is own worst enemy, undeniable boxing talent, hope he can sort his head out and get the meaningful fights moving to 168 I don't think will suit him.