He remains undefeated and at the top of his game at age 32, having taken very little punishment thanks to his quickness and defensive acumen. But after 12 years as a professional, “Boo Boo” has yet to land the kind of big-time fight he yearns for.

He says he is ready, willing and able to fight any of the big names and his promoter, Eddie Hearn of Matchroom Boxing, has said repeatedly that he is willing to bring a top foe to his broadcaster, DAZN, to face Andrade or take a good offer for Andrade to compete on another broadcast platform.

Hearn has said he even went so far as to last December offer middleweight world titlist Jermall Charlo, who is with Premier Boxing Champions, $7 million to face Andrade in a unification bout on DAZN without any requirement that he fight any additional bouts on the streaming service. So what’s Andrade to do?

The Providence, Rhode Island, product said he is willing to face any top opponent at middleweight or go up eight pounds to the super middleweight division for a significant fight.

“On my end, what I would like to do is be a three-divisional world champion by going up to 168 pounds and fight Billy Joe Saunders,” Andrade told BoxingScene.com. “It was something that was supposed to happen. It’s something that is going to help with my career as far locking in Canelo, Charlo, GGG, if that’s still possible. I’m looking to do something like that.”

Andrade was the mandatory challenger and set to challenge then-WBO middleweight titlist Saunders in October 2018 in Boston in a DAZN main event. However, Saunders tested positive for a performance-enhancing drug and Massachusetts regulators refused to give the British fighter a license. Eventually, Saunders, knowing he would be stripped, vacated the title and moved up in weight, where he eventually won the vacant WBO super middleweight title.

Andrade (29-0, 18 KOs) wound up facing Walter Kautondokwa for the vacant middleweight belt, dropping him four times and cruising to a shutout decision. Andrade has made three successful defenses, all in dominating fashion – a 12th-round knockout of Artur Akavov, a shutout decision of Maciej Sulecki, and a ninth-round knockout of Luke Keeler in a one-sided fight on Jan. 30 in Miami.

“I dismantle people. Dismantle is my new name,” Andrade said. “Call me ‘Dr. Dismantle.’ That’s who I’m gonna be.” 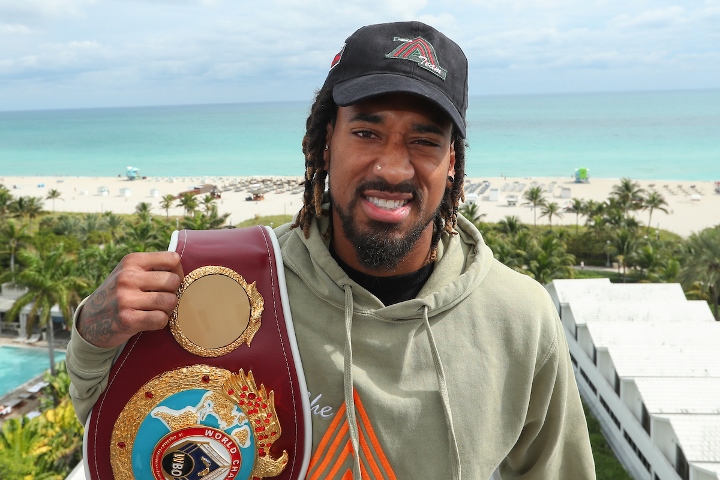 He feels as though he and Saunders have unfinished business.

“Billy Joe is acting like a little bitch and Canelo is also acting like a little bitch,” Andrade said. “Billy Joe is acting like a bitch because he wants to sit there and say he’s willing to fight me but when it comes down to it what you hear is, ‘Oh, he’s in the Canelo sweepstakes.’ So, therefore, you’re Canelo’s bitch and waiting for Canelo to be like, ‘Come on Billy Joe, let’s make a fight happen,’ where we can fight, make some good money and win lose or draw it’s the top guys out there fighting and making it happen.

“But if that doesn’t happen, I want to unify the middleweight division with Charlo if he’s willing and ready to make that happen. I’ll fight either Charlo -- the WBC middleweight champion (Jermall) – I’ll whoop his ass, or if the little one (WBC junior middleweight titlist Jermell Charlo) wants to come on up, he can come get it too. Those are the fights I’m looking for.

“I want to go and fight Billy Joe. It’s an easy fight to be made because we are both with the same network, same promotion and there’s no reason why not to make that fight. The real excuse is he’s waiting is because as he says, ‘We’re in the Canelo sweepstakes.’”

Saunders has been on the short list to face Alvarez when he returns to the ring, although his lawsuit against promoter Golden Boy, CEO Oscar De La Hoya and DAZN over his contract and opponent approval has kept him sidelined. Alvarez was supposed to face Saunders this past May before the coronavirus pandemic shut the sports world down and the fight was never formally announced or rescheduled.

“Billy Joe is saying he’s in the Canelo sweepstakes. How long? That’s been dragging on for a very long time,” Andrade said. “There is no more Billy Joe in the sweepstakes. How long is Billy Joe going to depend on Canelo, who has all this bull---- going on with his contract?  Canelo is making $35 million for the last few fights, so he’s good. He’s OK. He can live. He don’t have to fight if he doesn’t want to. He can retire today and be good (financially) if he wants. Billy Joe probably can’t. I probably can’t. Why are we waiting for Canelo?”

Charlo, who outpointed Sergiy Derevyanchenko on Sept. 26 to retain his title, is also on Andrade’s mind.

“It’s just hard to do anything with anyone who has a big name because there are excuses, like with Charlo. OK, you just fought Derevyanchenko and it was a good fight,” Andrade said. “We offered Charlo $7 million and I was willing to take that fight. We never got offered $7 million to go over to Showtime and do that fight. The answer would be yes on our side. Let’s do it.”

One thing Andrade is not looking for is yet another lesser fight that will do little for his reputation or legacy.

Williams is his next mandatory opponent. There was some discussion about Andrade returning before the end of the year to box in a nontitle bout on the undercard of lightweight titlist Devin Haney’s defense against Yuriorkis Gamboa on Nov. 7 or on the undercard of super middleweight Daniel Jacobs’ bout against Gabriel Rosado on Nov. 27. Andrade, however, said he will not be fighting on either show.

“No, I’m not (fighting on those cards). It’s something that was not brought to my attention,” Andrade said. “Realistically, how can I find under Devin Haney or Danny Jacobs?”

So, once again, Andrade will only have one fight this year. He also fought only once in 2018, 2016, 2015 and 2014, inactivity that was partially caused by issues with his previous promoters.

“It’s cool. It ain’t the first time or the second time that I had to go through this,” Andrade said. “But at the end of the day I don’t know my window in the sport. I’ve been fighting whoever they put in front of me. I want the bigger names. I want to fight the guys I should be fighting.