Andrade: I Thought Jacobs Did Enough To Beat Canelo - I Want Next!

WBO middleweight champion Demetrius Andrade was ringside on Saturday night at T-Mobile Arena in Las Vegas, and he felt Daniel Jacobs did enough to win a decision over Canelo Alvarez in their three belt unification.

Now Canelo is one belt away from unifying the entire middleweight division - and Andrade has the last belt remaining. 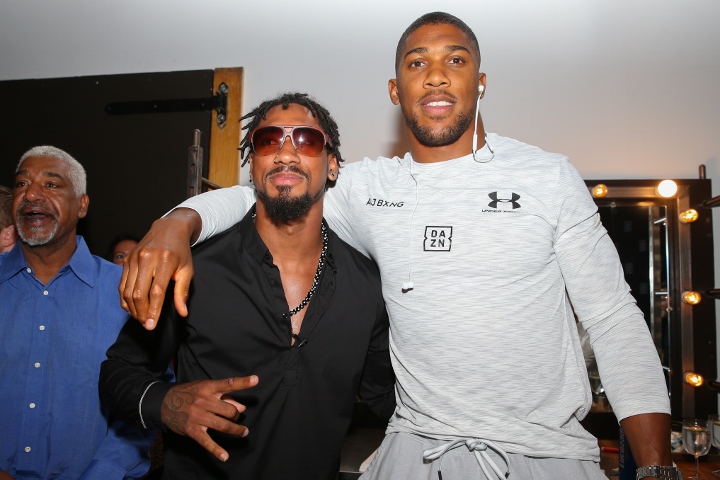 First up for Andrade is a voluntary defense with Maciej Sulecki next month, and if Andrade wins he wants a four belt unification in the fall.

"I definitely was entertained by the fight, two guys that have great a IQ. I thought Danny Jacobs did what he had to do to pull it off, I'm not the judge, but Canelo definitely came to fight. It was a great display of boxing for boxing itself," Andrade said.

"[I was not surprised by the slow pace] because that's what two guys with great IQs do, they are going figure out when to do their strikes at the right time, and once they do that it's time to fight.

"I honestly thought Danny pulled it off. Canelo definitely landed some clean shots, but Danny did look busier for me to pull if off. I'll get Sulecki out of the way and then Canelo should be the guy."

Andrade is not entirely sure of what strategy he would use to beat Canelo, but he would certainly stick the jab in his face all night.

"Every round could be different. I don't have a plan to do one thing all night. I can't really tell you what I'm going to do until I get in there. I will put the jab in his face all night... all night," Andrade said.

[QUOTE=Mexican_Puppet;19723228]The Vast majority means sh.it, they does not know about boxing and are haters of Canelo Period, he won those fights and the draw was fair, and he was the clear better man in the rematch against GGG[/QUOTE] The vast…

I hope Andrade keeps that attitude when/if he fights Canelo. It will mean yet another easy win and belt for Ginger. Andrade is delusional.

[QUOTE=Sid-Knee;19722742]The vast majority had G and Lara winning their fights. As did I. Only haters and psycho nationalists disagree.[/QUOTE] The Vast majority means sh.it, they does not know about boxing and are haters of Canelo Period, he won those fights…

the compubox system can also be manipulated, let's not be ignorant ... in addition, a boxer can win in number of blows and not necessarily win most of the rounds ... if I win 4 rounds by 6 strokes of…