Andrade: I Would Definitely Love To Take Derevyanchenko Fight

But after defeating Walter Kautondokwa, Artur Akavov, Maciej Sulecki and Luke Keeler in his past four appearances, Andrade also would welcome a tough test against an opponent some middleweights won’t box. The unbeaten WBO middleweight champion discussed a possible voluntary title defense against Sergiy Derevyanchenko during an Instagram Live interview with promoter Eddie Hearn.

“I asked for that fight before,” Andrade said. “I have no problem fighting anybody in my division – anybody. I’m already fighting anybody. I’m fighting whoever’s available at the time, or whoever’s willing to get in with me. So, I’m not sitting here, picking and choosing anybody. I would like to fight the well-known, popular guys out there. But that’s not the case. But if you could put a Derevyanchenko fight with me, I would definitely love to take that fight.” 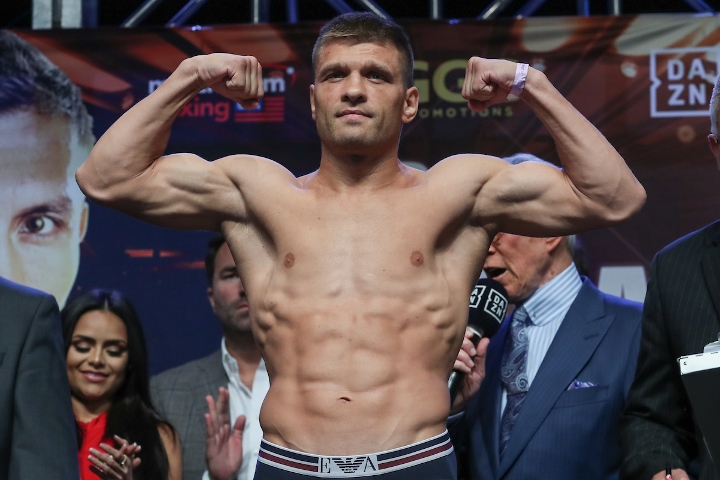 An Andrade-Derevyanchenko bout was discussed among their representatives late in 2017, but it didn’t materialize. Since then, Andrade (29-0, 18 KOs) has added the WBO 160-pound championship to his resume and Ukraine’s Derevyanchenko (13-2, 10 KOs) has established himself at the elite level.

In his last fight, Derevyanchenko lost a close unanimous decision to Golovkin (40-1-1, 35 KOs), who regained the then-vacant IBF middleweight title by defeating Derevyanchenko on October 5 at Madison Square Garden in New York. Their fan-friendly slugfest was one of boxing’s best action fights of 2019.

Derevyanchenko is the WBO’s number six contender for Andrade’s title. The 34-year-old Derevyanchenko didn’t have a fight scheduled when the COVID-19 pandemic brought boxing to a halt in mid-March.

The WBO ordered negotiations for an Andrade-Williams fight to begin March 10, but all boxing business is on hold. Williams is the WBO’s second-ranked contender for Andrade’s championship.

The WBO’s number one contender, Mexico’s Jaime Munguia (35-0, 28 KOs), hasn’t expressed interest in challenging Andrade next. That made Williams the next available contender in the WBO’s ratings.

I thought Derevyanchenko went to the PBC? Is he still on DAZN?

This is a great fight good test for both fighters, hope boxing comes back soon!

Wouldn't mind this fight at all but won't hold my breath on it happening. It would be the best name on his resume