As it turned out, Walter Kautondokwa should’ve been wary of Demetrius Andrade’s power.

Andrade knocked down Kautondokwa three times legitimately Saturday night and easily won their 12-round main event at TD Garden in Boston. His unanimous-decision victory earned the 30-year-old Andrade (26-0, 16 KOs) the vacant WBO middleweight title and made him a two-division champion.

Judges Ramon Cerdan (119-105), Glenn Feldman (120-104) and Marcus McDonnell (120-104) each scored their fight for Andrade by huge margins. Cerdan scored one round for the previously unbeaten, but untested Kautondokwa, but Feldman and McDonnell scored all 12 rounds for Andrade.

The strong southpaw from nearby Providence, Rhode Island, knocked down Kautondokwa twice in the fourth round and once in the third round. Referee Steve Willis also credited Andrade with a knockdown late in the first round, but Kautondokwa clearly got his leg tangled with Andrade’s leg and was hit by Andrade’s left hand once he was tripped to the canvas.

Kautondokwa showed tremendous heart by overcoming an obvious, unpunished foul in the first round and three legitimate knockdowns thereafter. But Andrade was just too skillful and smart for the rugged, unrefined Kautondokwa (17-1, 16 KOs). 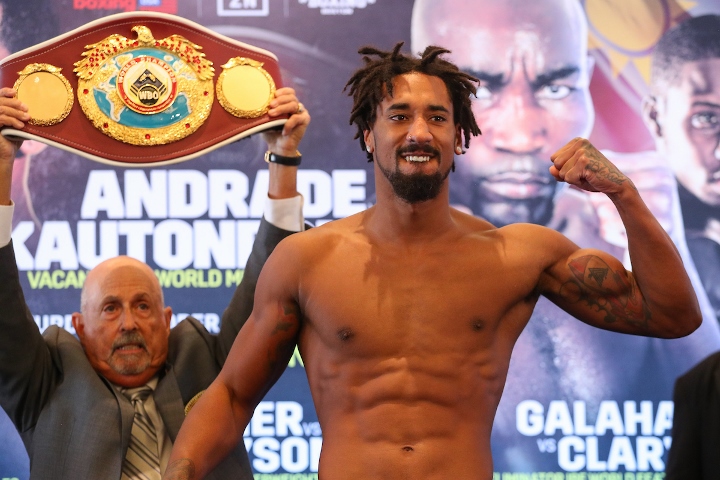 Andrade appeared well on his way to a knockout victory, but the former WBA/WBO 154-pound champion was careful following the fourth round of the Namibian contender’s considerable power. He was winning round after round, but a cautious Andrade knew Kautondokwa still was dangerous and avoided getting hit with the type of shot that could’ve cost him the WBO middleweight title and bigger paydays.

He mostly moved away from Kautondokwa’s right hand during the final eight rounds and landed occasional shots as Kautondokwa unsuccessfully followed him around the ring. Andrade went down during the sixth round, but only because Kautondokwa stepped on his foot.

An overhand left by Andrade sent Kautondokwa to the canvas for the third rime in the fight at 1:58 of the fourth round. Andrade went crashing to the canvas at the same time as Kautondokwa, but Willis didn’t credit Kautondokwa’s for knocking down Andrade with a left hand that hit him as Andrade connected with his own left.

Andrade’s gloves touched the canvas after Kautondokwa’s left hit him, which also should’ve counted as a knockdown.

Willis only counted a knockdown against Kautondokwa, but the game challenger got up again and continued to fight. Andrade dropped Kautondokwa yet again with another straight left at 1:04 of the fourth.

Willis warned Kautondokwa that he was close to stopping the bout, but Kautondokwa remained dangerous for the rest of the fourth round.

Andrade drilled Kautondokwa with a perfect left hand to the jaw that dropped Kautondokwa and left him flat on his back with 43 seconds to go in the third round. Unlike the controversial knockdown Andrade scored in the first round, there was no doubt about this one.

Again, however, Kautondokwa somehow was able to make it to the end of the third round.

Despite suffering a controversial knockdown late in the first round, Kautondokwa started the second round on strong legs. The challenger landed a straight right hand with just under a minute to go in that round, which made Andrade wary of engaging for the rest of it.

Andrade was credited with a knockdown late in the first round, but clearly hit Kautondokwa when he was down.

Kautondokwa tripped over Andrade’s leg, which sent Kautondokwa to one knee. Andrade hit Kautondokwa when he was on his left knee, but Willis incorrectly counted it as a knockdown.

A surprised Kautondokwa got up with about 20 seconds to go in the first round and was able to make it to the bell.

Kautondokwa had knocked out 16 straight opponents prior to Saturday night, yet had fought a very low level of opposition on his way to securing a title shot. He took what was by far the most difficult fight of his career on less than two weeks’ notice.

England’s Saunders subsequently relinquished his WBO middleweight title and the WBO sanctioned Andrade-Kautondokwa as a fight for its vacant 160-pound championship.

Andrade fought for the first time Saturday night since he beat Alantez Fox by unanimous decision in their 12-rounder last October 21 in Verona, New York.

Another tough talker gets schooled :lol1:

[QUOTE=TheBedStuyCaper;19212682]awful fight! I hope Andrade retires soon.[/QUOTE] don't you want to see him vs canelo at least????? why should he retire? its not his fault bjs got caught cheating

[QUOTE=Afi23;19212440]I just used the expression in jest. Of course, all these guys are elite level fighters but at the end of the day some will reveal themselves to be better than others amongst the elite level.[/QUOTE] Alright cool cool fair…

Andrade should've knocked him out. Kautondokwa had little offense and Andrade was able to see whatever he was doing. He had the 3 spectacular KDs and for some reason he decided to cruise the rest of the fight. I don't…