It doesn’t take much to get Demetrius Andrade in a joking mood. Naturally, he had to laugh off any claims of his opponent, Luke Keeler threatening to bring his title reign to a close.

“He just don’t know what he’s saying,” Andrade (28-0, 17KOs) quipped to BoxingScene.com. “He’s saying he’s getting under my skin, he just don't realize who he’s in with.”

The clash with Dublin, Ireland’s Keeler marks the third attempted title defense for Andrade, who was last seen effortlessly turning away the challenge of Poland’s Maciej Sulecki last June in his hometown of Providence, Rhode Island. The entirety of his middleweight title reign—dating back to his 12-round virtual shutout of previously unbeaten Walter Kautondokwa in October 2018—has produced largely one-sided affairs. 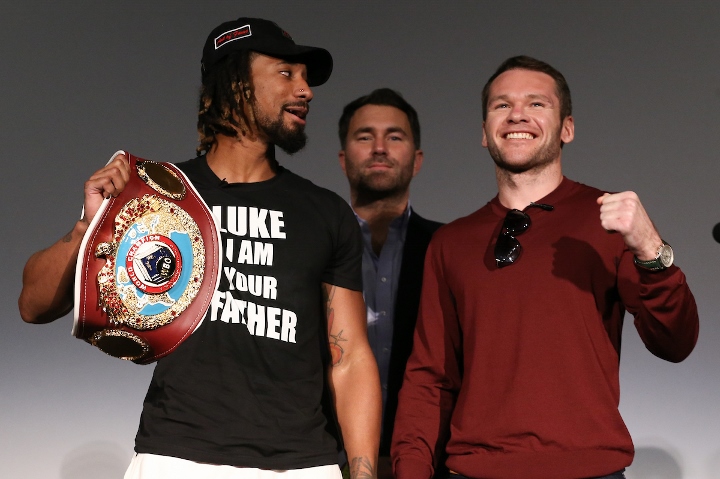 Andrade received a few stiff challenges at junior middleweight, where he enjoyed two separate title reigns. Each of his title wins at the weight came courtesy of split decision verdicts, edging then-unbeaten Vanes Martirosyan in their November 2013 meeting of U.S. Olympians—Martirosyan serving in 2004 Athens, Andrade representing USA in 2008 Beijing—and scoring a competitive yet seemingly clear 12-round nod over Jack Culcay on the road in Germany for his second title reign.

Four straight wins have followed at middleweight, all going into the 12th round and none at all in doubt by fight’s end. A 12th round stoppage of Artur Akavov represents Andrade’s lone stoppage win at 160 pounds, though the manner in which Keeler has dismissed his place among the division’s elite has him feeling he’s overdue to make it an early night at the office.

“You see this,” Andrade jokes, pointing to a shirt which reads ‘Luke, I Am Your Father’. The quote was made famous from the Star Wars series, but the unbeaten titlist has adopted the phrase as a way of life at least for this week.

“All this talk, he’s gonna shock the world, he’s gonna take my title. Man, he ain’t doing none of that," laughs off Andrade.

No , Liam Williams fought Fox and dismantled him on the back of a "promise" he would be fighting Andrade next,. .the top ten is shocking having Eubank Jr still at 7 . I think , ..so it's Adrade who…

Liam Williams ,, Hearns won't allow it , as seriously think it's a Williams victory , and quite easily

[QUOTE=Griever0730;20356035]Agreed. Other guys haven't been willing to get in with him though. He's always been too high-risk low-reward for the marquee names to risk their investments on. He has a belt and none of them want it. They would rather…

[QUOTE=Since1976;20355687]Very true, but the so called real opponents don't seem to want to get int he ring with him. On top of that, he fell for the DAZN scam and no GGG, Canelo or even a BJS fight. He's trapped…

[QUOTE=GFunk23;20355656]Funny shirt that Andrade is wearing. He is going to destroy Luke. Andrade needs to get into The ring with a real opponent soon. We have no idea how good he may be until until we see real competition. I…