Amir Khan: Did You See The Size of Canelo When He Fought Me?!

Bolton’s Amir Khan (33-4, 20 KOs) was knocked out in six by then-WBC middleweight Champion Saul Alvarez in May 2016 yet the 31-year-old firmly believes that his former opponent has continued to disrespect the sport by heavily out-weighing opponents on fight night and therefore fighting at an artificial weight for the past few years.

Alvarez beat Gennady Golovkin by a Majority Decision on Saturday night to underline his dominance at middleweight.

Khan, though, has told Sheldan Keay of the Manchester Evening News that the Mexican should not have been given the opportunity due to a failed drugs test earlier this year. 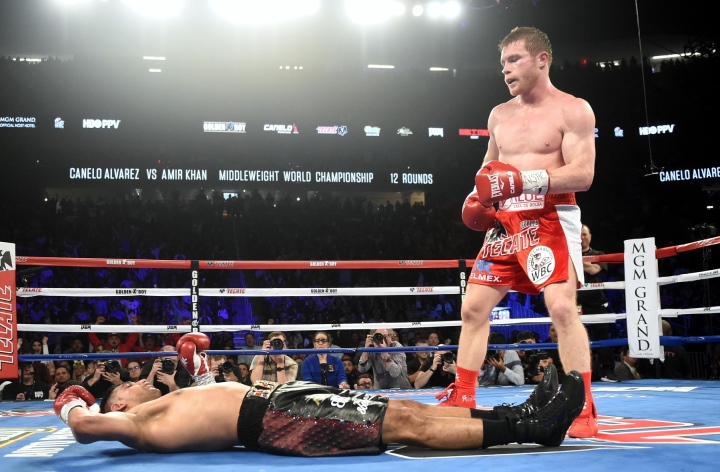 Canelo tested positive for clenbuterol ahead of a proposed May date with Golovkin and was given a six-month suspension that delayed their rematch, but, like many others, Khan feels that the superstar got off lightly.

“They should have fined Canelo big time and used him as an example,” he said.  “Did you see the size of him when he fought me?  I remember thinking 'wow' when I saw him in the corner.  He was massive.”

The 31-year-old has posted two comeback wins since that bad knockout loss, victories over Phil Lo Greco and Samuel Vargas, one an easy first-round KO the other an off-the-canvas decision win, and is currently chasing a fight with Manny Pacquiao while being called out by domestic rival Kell Brook.

Promoter Eddie Hearn has confirmed that Brook is willing to drop back down to 147lbs after fighting at light-middleweight last time, a two-round knockout win over Siarhei Rabchanka in March, and the Sheffield-based boxer is desperate to secure a meeting with Khan despite Khan chasing a meeting with Manny.

[QUOTE=W1LL;19122016]You'll be talking about Danny Garcia's "eyes closed" hook as if it was a well-timed counter next.[/QUOTE] You're right . That hook DSG threw was a thing of beauty .

[QUOTE=Manic Shot;19120567]Sir, are you a time traveler? How in the heck did get the picture of old Manny Pacquiao?[/QUOTE] LOL, never thought of that one- funny though-LOL!!!

[QUOTE=Idunnoshet;19121842]Oh ok . I was confused by your kinda random response . So Canelo shook up the world with his KO of Khan ? Yeah bro . Nobody saw that one coming .[/QUOTE] You'll be talking about Danny Garcia's "eyes…

[QUOTE=W1LL;19121593]Yea but milk dud head Tarver KO'd Roy Jones, soon after RJJ moved up to Heavyweight and shook up da world.[/QUOTE] Oh ok . I was confused by your kinda random response . So Canelo shook up the world with…

[QUOTE=Idunnoshet;19120821]Nice comeback . But Samuel Vargas did drop Khan with the same punch Canelo KO'd him with didn't he ?[/QUOTE] Yea but milk dud head Tarver KO'd Roy Jones, soon after RJJ moved up to Heavyweight and shook up da…