Amir Khan Has Surgery on Elbow, Vows To Return Stronger

The Olympic silver medallist, 32, stated that he felt pain during last month's fight with WBO welterweight champion Terence Crawford. Khan was stopped in the sixth round of that bout.

Khan revealed the surgery on social media: "Hi guys, so I had an operation today on my elbow area. From the last fight I could feel the pain when I was throwing the right hand. There's a bit of extra bone growing there which was knocking and making it very painful. Hopefully I should be back in the ring soon. Boxing is a tough sport when you have to work hard and train hard and you get all these injuries. To overcome these injuries you have to come to the hospital. So hopefully I won't get these injuries. I'll come back stronger. It was giving me pain in my last fight. I’ll be back punching hard in 3-4 weeks. Can’t wait to get back in the ring." 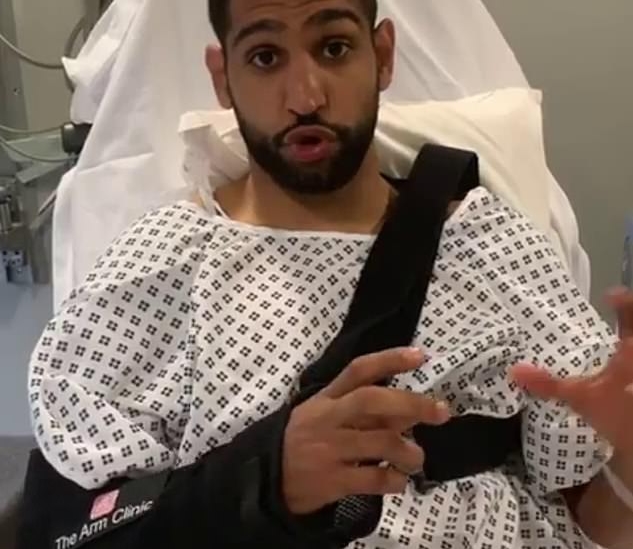 No word on when Khan plans to return and where, but he's previously mentioned a ring return in October or November.

There are several potential options for him in a packed welterweight division.

The biggest option would be a showdown with his domestic rival Kell Brook, who has been inactive since December when he had a tougher than expected decision win over Michael Zarafa.

Put some respek on Khan’s name. He is without a doubt the greatest boxer to ever lace em up.

Until he replaces his jaw bone with titanium plates, what's the point :dunno:

Khan just needs to stop... but he won't I'd say a fight against Broner then if he can get past him a fight with Pac after he likely loses to Thurman an call it a career cuz we know he's…

[QUOTE=HarvardBlue;19733255]This fool said to overcome injuries you come to the hospital. All this time I was going to the mechanic with my injuries. Khan has the mentality of a eight year old.[/QUOTE] lmao, War Khanvaaaaas!!!