Amir Khan was very impressed by the recent in-ring performance of Tyson Fury, who fought to a controversial twelve round draw with  WBC heavyweight champion Deontay Wilder at Staples Center in Los Angeles.

Fury was a tremendous underdog in the bout - after dealing with mental health problems, alcohol and substance abuse issues. Fury had been out of the ring from November 2015 until June 2018.

Coming in to the Wilder fight, Fury had two contests against overmatched opponents in the last few months. 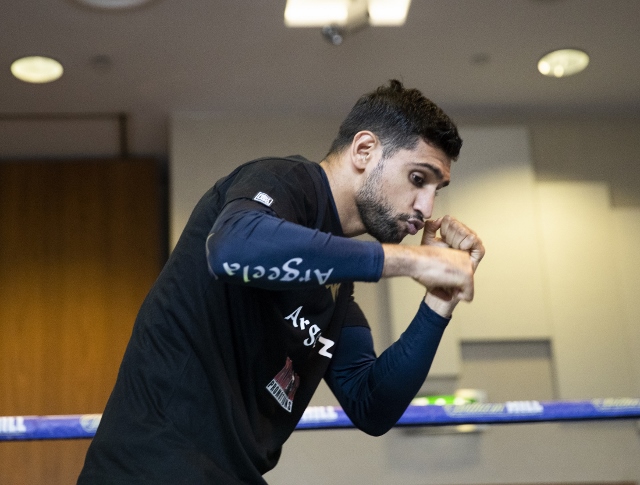 During the bout, Fury boxed like the same man who shocked Wladimir Klitschko three years earlier. And he managed to survive two knockdowns during the contest - including one in the twelfth round where he appeared to be out cold.

Now Khan might find himself in the same position next year.

Back in April, Khan returned after nearly two years of being inactive. He's picked up two wins in his comeback campaign - and now he's mulling the scenario of accepting an offer of $5 million to challenge WBO welterweight champion Terence Crawford on March 23rd at Madison Square Garden in New York City.

Crawford is regarded by many as the best pound-for-pound fighter in the world - but Khan is not intimidated and feels a lot of motivation after witnessing the career resurgence of Fury.

“We both went through a very tough time in our lives and how I came back, boxing kept me strong and focused, and the same with him. Boxing changed my life twice. Fury gives me inspiration and boxing is a positive sport, I feel confident to help boxing because of how many people it's helped, myself and Fury and other fighters that have gone on to win numerous titles," Khan said to The Mirror.

“Religion was very influential because when it got really bad and you don't know who to turn to but I turned to God and was praying and meditating, that really helped. Religion and boxing helped me get away from everything."

[QUOTE=KingKrypton;19342510]Khan could've got up in the Canelo fight. They waived it off too early, he was clearly outboxing Canelo and up 4-1.[/QUOTE] Yupp he just needed a 36 count

[QUOTE=archiemoore1;19342352]Fury got up. You hibernated[/QUOTE] So?? He just gotto learn that undertaker routine..and he ll be goat

Yes, maybe Khan was just taking a little rest and wanted to get up at 9 seconds. But as he knew ref waved fight off prematurely Khan thought he might as well stay down for full count

Khan could've got up in the Canelo fight. They waived it off too early, he was clearly outboxing Canelo and up 4-1.