According to Amir Khan, he could care less if his domestic rival, Kell Brook, continues to fight or retires for good.

Brook recently dismissed speculation he will retire from boxing but insists only the biggest fights will get him back into the ring.

Brook has only fought twice in the two years since consecutive world title defeats to Gennady Golovkin and Errol Spence Jr each left him with broken orbital bones. 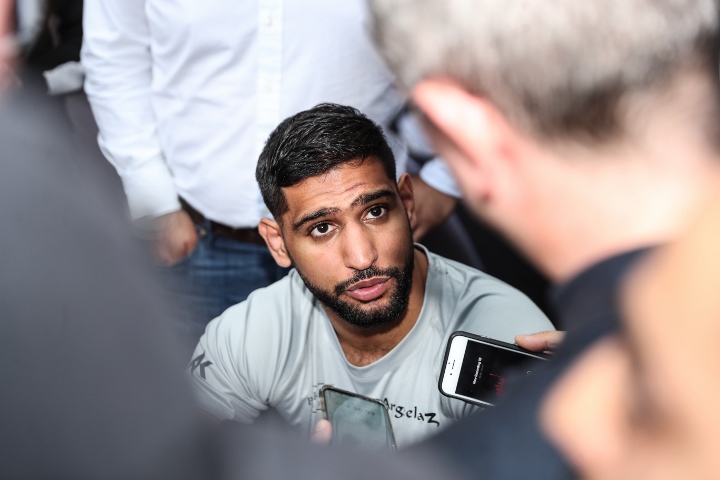 The Spence bout was the 33-year-old's only contest at the 147lb limit since the last successful defence of his IBF belt against Kevin Bizier in March 2016 – back-to-back wins over Sergey Rabchenko and Michael Zerafa in 2018 coming at light-middleweight.

But in a statement issued via social media, Brook confirmed Terence Crawford was a target and restated his aim to compete again at the elite level after an unnecessarily gruelling points win over Zerafa in his native Sheffield last December underwhelmed.

"I just wanted to address some speculation circulating around my retirement," he posted. "I'm not sure where these reports have surfaced from but I have NOT retired. I have had some time away from the ring but me and my team have been proactively looking to secure them big fights.

"We went to New York because we want to fight Crawford. These are the level of fights that get me excited and I'd only ever want to bow out on a high, putting on an exciting show for my fans who have always shown me incredible support! If these BIG fights can be made, then I'd love nothing more than to dance again under them bright lights."

Attempts to secure a showdown between Brook and long-time domestic rival Amir Khan, who lost to Crawford in six rounds at Madison Square Garden in April, have been persistently frustrated.

Khan will face off against Nerrag Goyat in Saudi Arabia next month, and he says he would be prepared to take on Brook after that fight.

But he also said he wouldn't be bothered if Brook decides to retire.

"I mean, I don’t really care to be honest with you," Khan told Boxing Social.

[QUOTE=BLASTER1;19843927]That's a very good point and the way I see these two going. For whatever reason Khan doesn't want to go into the fight as the favourite. He just needs to retire imo.[/QUOTE] Khan is a great talker and manipulator,…

Yikes. Idek if Khan meant to throw that much venom at Brook, but nice hit either way. Brook just needs to retire before he's starring in a real life version of the Bionic Man.

Con is such a POS, he has no problem getting KTFO by ANYONE in the world as long it's not Kell Brook. A true clown in every sense of the word. People legit tune into his fights to watch him…

[QUOTE=Califire209;19843345]Khan will Brook when he is totally washed out,, he will fight Brook when he is expected to lose against him and still make Big Money[/QUOTE] That's a very good point and the way I see these two going. For…