Among the coaches to work his corner throughout the years, were Freddie Roach, Virgil Hunter, Joe Goossen and Bones Adams.

But for what appears to be the final stage of his professional run, Khan feels confident enough to train himself if necessary. 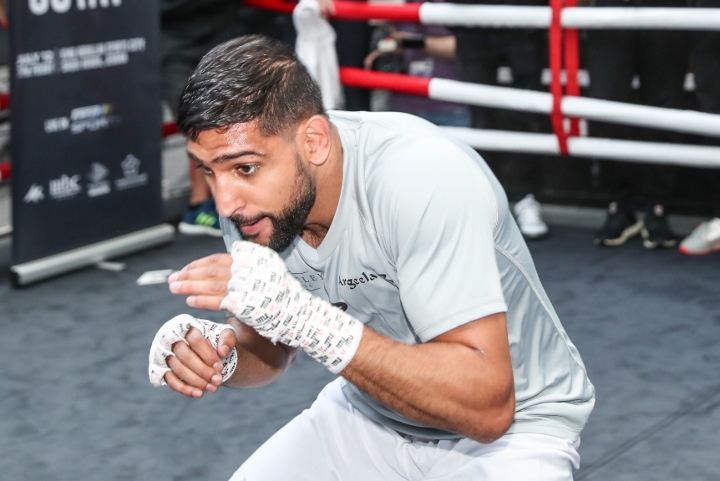 As previously reported on BoxingScene.com, Khan will not return to the ring during the ongoing coronavirus pandemic.

Because of the restrictions involved, most boxing events will be held without spectators.

The sport is expected to resume next month, but Khan is going to wait until fans will be allowed to attend.

"An empty arena is not going to lift me up to fight, I will have to wait until they're full again," Khan said to Mirror Fighting.

Khan has been out of the ring since last July, when he easily stopped Billy Dib.

"I'm keeping my options open in terms of a coach and am doing a little bit of training at home," Khan said.

"At this stage of my career it's about having a coach just to set a game plan. I can even train myself for a fight. It's good to have a coach there but how much of a job could he do now because I've been in the game for so long. Do I really need one of the top trainers? Maybe for motivation, someone like a Freddie Roach who I used to be with; he would see where I was and where I am now and compare.

"Going to America was probably the best move I made and I would love to go back there again because I love the quality of training, the sparring and living out there. There are so many distractions here that it can be difficult whereas in America I am locked away."

Of course you can train yourself. I gather anyone can train themselves to get ktfo🤣🤣

Khan stopped taking boxing seriously a good few years ago now. Either take it seriously or retire before you gets hurt

Ur a lame ass simp, Period. That's why AJ stretched your old lady out. And why u was crying about it publicly and went right back to her. That's exactly what a true simp would do. And you quit in…