Amir Khan: I Would Take Kell Brook Out in Six or Seven Rounds!

Amir Khan is very confident that a deal can be made for domestic showdown with Kell Brook.

Khan and Brook have been rivals for years, and their fight appeared to be close to getting put together when the Bolton boxer signed a promotional deal with Eddie Hearn, who also handles Brook.

But the negotiations fell apart when Khan went in another direction by signing a deal to face WBO welterweight champion Terence Crawford last month in New York City. 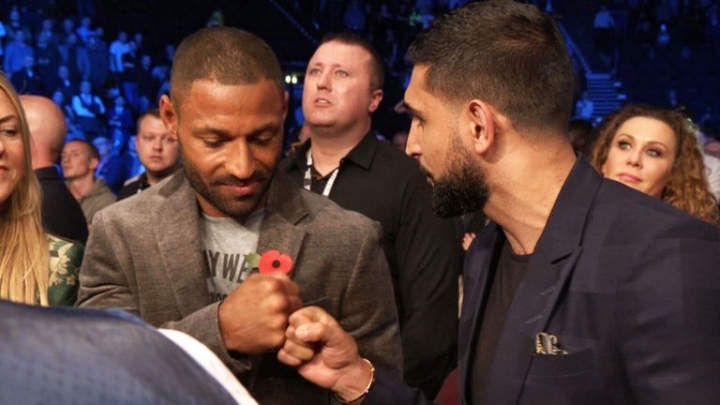 After Khan was stopped in six rounds by Crawford, many believe the Brook fight is dead in the water.

But Khan sees no reason as to why that fight can't be made.

“We’ve got names like Kell Brook there; still the top, top fighters there. I’m in a very lucky position that I have the opportunity to put bums on seats. TV networks like to see me fight and getting the top guys in the ring is quite easy. I’m still in a good position of getting the big names in, because we bring a lot of money to the table," Khan told The National.

"Kell Brook still excites me. It’s a fight that’s always there. People say it’s a 50/50 fight, but I believe I would take out Kell Brook in six or seven rounds. That’s the fight that would be an easy sell.

“We’re with the same promoter in Eddie Hearn. I would like to take that fight. He’s a great fighter, Kell, he’s done a lot in the game. And that would be a massive fight in the UK. I've done everything now I wanted to do away from the UK, in America. I want to have my next fight in the UK. And if it’s Kell, it’s Kell."

Khan is looking to return to the ring by October or November of this year.

“Now I want to take some time off. I’m going to go back to the drawing board. I’m still in the top 10 in the world and I want to fight someone in the top 10 for my next fight. Hopefully that will be in October or November time," Khan said.

[QUOTE=JWHardin;19713176]I think Joseito KO's Khan.[/QUOTE] That's precisely the reason why I want Khan to take him to UK as a journeyman. If he survives an onslaught, then he wins on the scorecards against a quality fighter then goes on with…

Make it happen,m still one of the biggest fights in division.