Amir Khan: I Believe India Can Produce a Muhammad Ali

Set to roll out professional academies in India starting April next year, British star Amir Khan said that given the abundant talent, he would be very surprised if the country does not produce a boxer of the calibre of Muhammad Ali in the near future.

"I believe India can produce a Muhammad Ali. I cannot accept that with that huge population and talent that you guys have, it's not possible. India has the potential to produce a champion like Ali," Khan told reporters during an event to announce the launch of his planned academy in Delhi-NCR.

Amir's academy will have a tie-up with Mixed Martial Arts organisation, Super Fight Promotions, which will also partner the star in launching an International Boxing League in South East Asia. 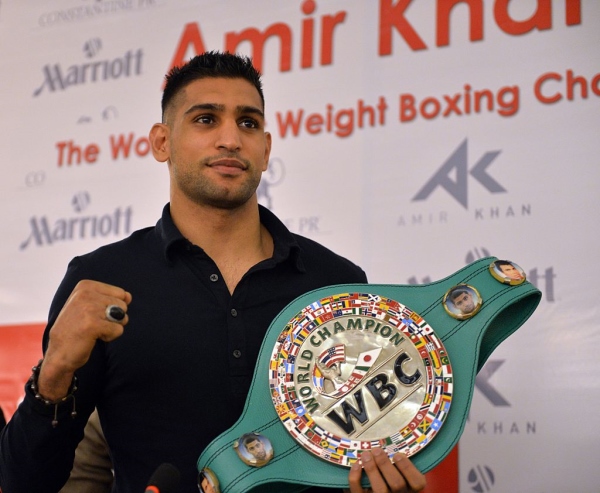 Bowled over by the warm hospitality that he got during his maiden trip to the country, Amir said the five-day stay, which ends today, has been an unforgettable experience.

"I never expected this kind of love and warmth. I was here for the first time, attended a couple of weddings (including that of star cricketer Harbhajan Singh), went to Ajmer Sharif and it was an unforgettable experience. I would definitely come back again," said the 28-year-old, who, at 17, became the yougest British boxer to win an Olympic medal with his silver in the 2004 Athens Games.

The welterweight boxer, whose roots are Pakistani, could not escape the cliched queries on Indo-Pak political relations. Steering away from any political statement, Amir said sports could be the solution.

"I am setting up five academies in Pakistan and they will be ready in about 12 months. Then once the academy in India takes off, who knows you might have bouts between boys from both sides. So there will be fights but with a referee in between," he said with a laugh.

"I know the relations between India and Pakistan are not the best but being a British-Pakistani, I can only say that I can help in whatever way I am asked to," he added.

"There are always good and bad people in every religion but we have to follow the good ones."

[QUOTE=miniq;18864110]No Just as it's not racist to point out that black athletes dominate running competitions. They are physically adapted for it. Especially them kenyans. To ignore facts in favour of holding a "PC view" is ridiculous.[/QUOTE] Well said... some races…

[QUOTE=Rip Chudd;18859979]Where's Angel Garcia when you need him?[/QUOTE] In fairness to Khan note that he said India, not Pakistan 😂😂😂

Male average height and weight in India is considerably lower than the countries that house the dominant HW's.

Is it racist to point out that a nation doesn’t really produce any world class athletes in any sport?