The contest was the first for Khan in two years, after dealing with personal issue and rehabilitation for surgery on his hand.

He was last seen in action back in May of 2016, when he was knocked out cold in the sixth round, at a catch-weight of 155-pounds, by then WBC middleweight champion Saul "Canelo" Alvarez. 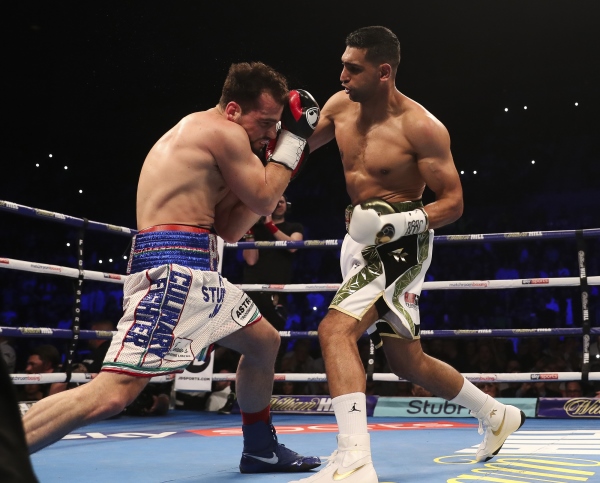 The contest was also the first for Khan in five years.

Within the first fifteen seconds, Khan's hand speed was too much as he decked Lo Greco and had him in trouble. Lo Greco beat the count and then Khan battered him with punches that sent the Italian fighter down for the second time and the contest was waved off.

Next up could be a grudge match showdown with former IBF welterweight champion Kell Brook.

Khan is also looking for a rematch with Danny Garcia, who knocked out the Bolton boxer when they collided back in 2012 in a junior welterweight unification.

Khan was scheduled at one point to fight Manny Pacquiao last April in UAE, but the contest fell apart within weeks after being announced, because the investors were unable to produce proof of the promised funds.

Khan's career has mostly played out in the United States for the last few years as he pursued, without success, fights with Pacquiao and Floyd Mayweather Jr.

At the start of the camp for Lo Greco, Khan's trainer of the last few years, Virgil Hunter, became very ill, and the former champ was forced to look around for a new coach. He hired veteran trainer Joe Goossen and the two of them have really hit it off.

An obvious pattern. Khan beats a couple bums, gets knocked out and comes back against a couple bums... The whole time we suffer the hype

I like how people are on Khan's **** because he beat a bum. I can't wait for Khan to get KOed or exposed so people will realize that he's the same B-level fighter he's always been.

[IMG]http://vcnv.org/wp-content/uploads/2016/03/refugeecampcalais.jpg[/IMG] WHO R U PICKING? for khan's next opponent? yes phil lo greco is somewhere in this picture, for those who would like to see a rematch.

[QUOTE=BLASTER1;18690401]I agree with Khan getting the big fights even though he wouldnt deserve them. I think that it will go to a decision. Khan doesnt have the power to knock this guy out. Even though Spence put him out in…