Amir Imam has finally dodged the death grip that was his promotional deal with Don King.

“The Young Master” signed a contract with Top Rank this week after he filed a lawsuit against King earlier this year claiming unfair and deceptive trade practices. Now that the legal matter is behind him, he’s officially ready to get back into the ring.

“It’s a blessing to be here. It’s all positivity now and I’m ready to see what the future holds,” Imam told Boxing Scene. “I’m happy to be in a good spot now and am ready to take full advantage of the opportunity.

“My contract situation was very frustrating. I stayed in the gym. I have people around me that keep my mind right. I am grateful for my family for their support. I was deep underwater going through it and dealing with it at the time. 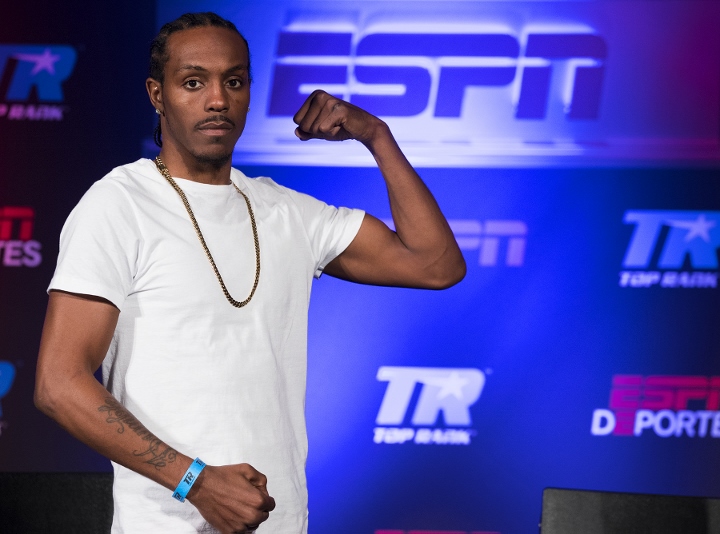 The 28-year-old Imam, (21-2, 18 KOs) has been sitting on the sidelines since his March 2018 world title opportunity loss to Jose Ramirez. The 87-year-old idle King stashed away his prized fighter in a promotional company bare and bereft of boxers, and Imam was forced to take legal action to stop stagnating his career.

The heavy-handed New Yorker from Albany will begin training soon as he eyes his next fight. He remains undecided on who his next trainer will be after parting ways with Stacey McKinley, or whether or not he will campaign as a lightweight or welterweight. He said he is leaning more toward 147.

“If I can make 140 and feel strong at that weight, I’ll do it,” Imam said. “Either division doesn’t matter to me. I know I have the skills to compete with every top guy out there. I can hit. It doesn’t matter.”

When asked who he thinks is the best 147-pound fighter in the world as he looks to prove himself in the stacked class, Imam said, “I don’t know who is the best 147-pound fighter because the best have not faught the best. I couldn’t tell you. If I’m at 147, I’m considering myself the best. I’m not considering any of them. Once I get the opportunity, I’m going to take full advantage.”

One fight Imam is now very much in line for is a clash with Terence Crawford. Top Rank continues to build its stable of welterweights in a division dominated with PBC pugilists, meaning Imam should see Crawford sometime soon.

“A fight with Terence Crawford is a good opportunity for me,” he said. “I’m looking forward to it. I have to get some fights in first. I want to be put on the table for Terence. That will be a good fight, and a lot of people want to see it.”

South Florida-based boxing manager Peter Kahn aided Imam navigation through his turbulent pact with King. Kahn said the plan is to put his fighter in the ring by November.

“Amir has a solid team and support system around him and he’s ready to showcase his talent and desire to become a world champion,” Kahn told Boxing Scene.

Imam, who’s previously decisioned the dangerous Yordenis Ugas in 2014 and also lost to Adrian Granados, is now looking for another name opponent.

In the meantime, he offered advice to his peers for what they can learn from his promotional ordeal with King.

[QUOTE=ArturoBalboa;19998628]I’ll leave you to your deductions Columbo. In the hear and now Crawford wants Spence who doesn’t seem interested, that’s enough for me. A deduction of my own, you’re avoiding answering my question because you agree that Crawford is the…

[QUOTE=Motorcity Cobra;19998492]When Arum said Brook would probably want to much money to fight Crawford, but never asked him how much he'd want, that's when I knew they were taking the GGG route. Let the other fighter take the hard route…

he has power but he's never been able to stay active under king and really develop a style that could protect what looks like a less than durable chin and body. what in the world would have possessed him to…

[QUOTE=ArturoBalboa;19998418]Well it appears to me that Crawford wants the fight imminently while Spence is the one talking about clearing out the division and not fighting Crawford. Difference of opinion aside, do you agree or disagree that Spence v crawford is…

[QUOTE=Motorcity Cobra;19998206]When Arum said Thurman & Porter aren't good fights for Crawford that's when I saw the play. He was gonna feed Crawford bums until Spence clears out the PBC welterweights. This is GGG all over again. No tough fight…