TOLEDO, OH—Junction Avenue in Toledo looks like many low-income neighborhoods in America. Faded white houses built in the 1940s, some with plywood boards covering their front doors, spaced out between vacant lots and empty fields the state government has promised to turn into amphitheaters and parks.

Amidst all of that stands a glowing Soul City Gym, painted in vibrant tribal-inspired pastels. Though it advertises boxing and wrestling training, the figure painted on the front of the gym facing the road is neither a grappler nor a fighter, it’s a child with a pencil, eagerly finishing their schoolwork.

Soul City has been like the ray of light that’s enabled struggling flowers to blossom through the cracks of the city’s most fractured neighborhoods since 2008. According to the gym’s website “in the neighborhood, only 37% of parents are high school graduates and 70% of the children come from single parent households,” but “since its inception in 2008, Soul City has been able to successfully contribute to a 30% drop in crime on Junction Avenue in the heart of Toledo.”

Now, in the midst of a global pandemic caused by COVID-19, the gym finds itself fighting right alongside everyone else. As a non-profit gym run by volunteers, it operates solely on donations, without governmental aid. When the gym started to get too cold in the winter, a group of a dozen apprentices from Toledo installed a furnace, ductwork and a new air conditioner. When the gym wanted to build a jungle gym in the facility’s basement for younger children, donations came in for that too.

But now, with no extra cash floating around for anyone during these times, nor the ability to operate as usual during social distancing, Soul City and gyms like it are simply trying to hold on until it’s over.

“We've been open for ten years and we've been in tougher situations than this. Some days we've been like man, how are we gonna pay these bills, and all of the sudden a donor comes along and is like hey, do you need help with the gas bill, light bill and the WiFi bill so you can stay open,” said co-founder and coach Roshawn Jones. “As long as we have community support, we can stay open. As long as we've got the lights and the gas going, we're good. We're gonna make it happen, because this is all we've got.” 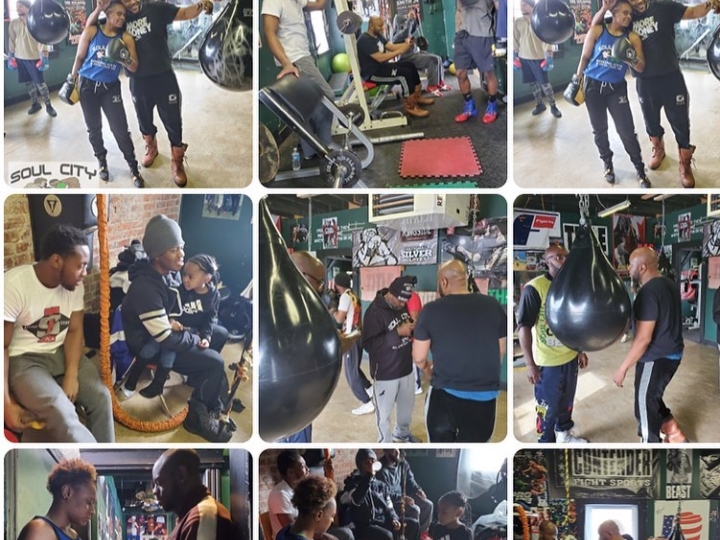 In the meantime, Soul City has tried to get creative. It’s been able to leverage its high-profile members, namely Olympian and undefeated junior middleweight Charles Conwell, numerous-time National champ-turned undefeated prospect Otha Jones III and his sister, Osha Jones, Pan-Am Games gold medalist, to boost the signal of fundraising efforts. The three were already in camp during the COVID-19 breakout and have remained there, so they have been able to at least safely work out together. The gym has been streaming live daily workouts, led by Otha and Charles themselves, and even doing classic fight watchalongs on YouTube with Conwell.

As its frontal design suggests, Soul City is a boxing and wrestling gym in name, but its service to the community is as an after-school program, a tutoring aid, and in general, a free provider of healthy activity in an underserved area. The gym offers SAT tutoring via volunteers from the University of Toledo, as well as financial literacy courses from a local bank. If the children taking part in those programs also go on to become successful athletes like Conwell and the Jones siblings, that’s a bonus, but the needs gyms like Soul City meet for at-risk youth are ones that would otherwise be beyond the economic means of many families in neighborhoods like Junction Avenue.

“We're in the heart of the ghetto, the hood, where the crime rate is sky high, with unsolved murders, unsolved shootings. We've got to keep these kids on a narrow path so they don't fall off into the fast lane,” said Jones. “They're getting life lessons, to learn how to deal with things after high school or college. We're known for our great fighters, but we wanna be known for making another Bill Gates as well.”

There are many non-profits and charities throughout America in a similar position to Soul City. According to a recent study by CNN, one in five Americans benefit from non-profit organizations, and recreation is one of the major “sectors” of them. Without meaningful relief during the pandemic—namely a freezing of tax, rent and utility bills--and then stimulus afterwards, it’s frankly inevitable that many of America’s most important boxing gyms will close. Realistically, corporations will receive aid far before the non-profit sector will, even after the pandemic has passed.

Unless that help comes, the gyms will rely on the generosity of the public. Boxing gyms are in a difficult spot when looking for financial aid, because many boxers themselves are at worst struggling financially right now and at best are in a precarious financial position where saving is paramount. In other words, the people who best understand the value of the gyms are likely in the worst position to help them.

With a collaborative effort however, with small donations from community members who can spare the money, it may be possible to stop the bleeding long enough to enable many of these gyms to stay open.

"We've all gotta come together. And if some gyms do close down, we've got to partner up to keep these after school programs for these inner city kids going, because we can't let this kids go back to the streets, we all know what's going to happen if they go back to the streets," said Jones. "Start grinding. Start saving everything and coming together."

All they’re asking for is what they provide to so many communities across the country: A fighting chance.

(For those in a position to do so, visit www.soulcitygym.com, or consider donating to your local non-profit boxing club.)

A boxing gym is a den of bacteria and viruses....it’s hot, they usually don’t have the AC on, it stinks, people don’t wash the bags, machines, floors, rings, the bathrooms and showers are filthy.....it’s where poor hungry fighters come up…

This sucks but it's what needed at the moment. I feel that the sooner we cooperate, the sooner this mess will be taken care of. I love the sport and gyms and whomever contribute to it, but we're ALL dealing…

F[I]uc[/I]k! This article made me sad. Those small gyms are the only ones who save youth for straying to the dark side and helping them guide to the correct path of righteousness. :boxing:

Not a good title for the article, but a good article. boxing gym is the worst place during a pandemic. even if not many in the gym, hardcore breathing (droplets in the air) and the excess amount of fluids are…