Amanda Serrano and her team have found a way to get in one more fight in 2020.

BoxingScene.com has learned that the record-setting seven division titlist is due to return to the ring on December 17. Brooklyn’s Serrano (38-1-1, 28KOs) will appear on a card whose already-set televised portion will air live on NBC Sports Network as the third installment of the new Ring City USA boxing series from the famed Wild Card Boxing Club in Hollywood, California.

An opponent is still in the process of being finalized, though sources inform BoxingScene.com that Edmonson’s rugged junior lightweight Vanessa Bradford tops the short list of suitable foes for the occasion. 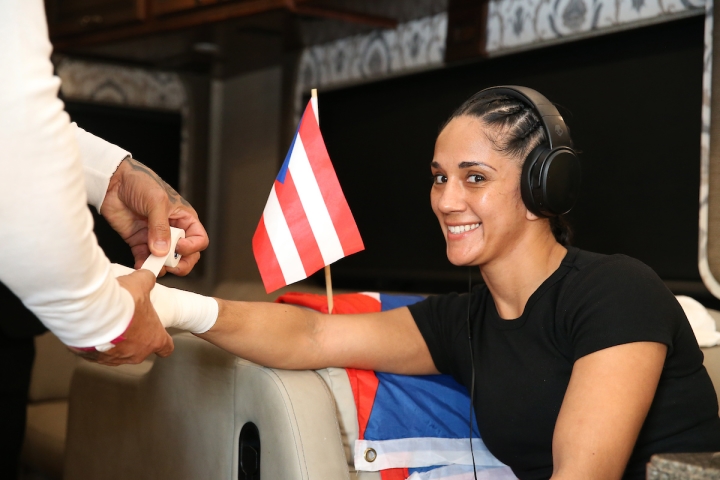 Lou DiBella, Serrano’s promoter declined specific comment regarding the aforementioned date and matchup, other than to note that Serrano will not go into 2021 without at least having fought twice this year.

“I’m busting my balls to make sure that Amanda stays active,” DiBella told BoxingScene.com, though stopping well short of confirming or denying any such rumors regarding Serrano’s next fight. “We expect to be in a position in the next few days to announce her return to the ring in a setting that at least allows her to get in a quality fight before the end of the year.”

Plans have long been in place for Serrano and Mrdjenovich to collide in a featherweight title unification clash. Such a fight is targeted for the first quarter of 2021, though finding a willing stateside platform to prominently showcase women’s boxing remains a struggle. As such, DiBella—long the sport’s leading advocate to further the barely existent state of women’s boxing in the U.S.—as well as the rest of Serrano’s team to feverishly work to get the winningest titlist in female boxing history back in the ring within the next available slot.

Serrano has seen two title fights fall by the wayside in a pandemic-stricken 2020. The Puerto Rican southpaw—who has claimed belts in every division from 115- through 140-pounds—entered the New Year eyeing a superfight with Irish superstar and reigning undisputed lightweight championship Katie Taylor.

The bout was preceded by a stay-busy fight versus Brazil's Simone Aparecida Da Silva, whom Serrano blew out inside of three rounds this past January in Miami. The win should have paved the way for a blockbuster showdown with Taylor, though the universe clearly had other plans.

The pairing endured four separate postponed dates before falling apart altogether, with Taylor instead facing and defeating Belgium’s Delfine Persoon in their rematch this past August.

Serrano was then being groomed for a featherweight unification clash with Denmark’s Sarah Mahfoud (10-0, 3KOs). Serrano’s WBO and Mahfoud’s IBF belts were to have been at stake on an all-female card that was to include two-time Olympic Gold medalist and three-division world champion Claressa Shields on December 11 in Las Vegas. The event would have served as the official boxing debut of Dana White’s Zuffa Boxing, only for the show to get canceled due to a number of external reasons.

With that comes the chance for Serrano—a multi-sport athlete who recently claimed four submission wins en route to a Gold medal in a Jiu-Jitsu tournament—to return in an approvable stay busy fight. Sources tell BoxingScene.com that her fight is not budgeted for the Ring City telecast on NBCSN, though efforts are being made for her to appear atop a livestream either preceding or immediately following the televised show.

Wins by Serrano and Mrdjenovich will set up a WBO/WBC/WBA unification bout in 2021, with Serrano ambitiously keeping another title unifying bout with Mahfoud on her radar sometime to follow in a quest to becoming undisputed featherweight queen.

[QUOTE=Ricardi;20922257]She's the only Female boxer that's fun to watch. Woman boxers should wear one size smaller gloves compared to guys[/QUOTE] Agreed. She fights the most like a guy out of any of them.

Womans boxing will never reach the levels of woman ufc...and its their own fault for backing out and making things complicated for womans boxing Nobody really cares and they wont until we get hi demands on fights that should be…

Great I'm looking forward to seeing Amanda Serrano in the ring again. I hope that they're able to find her an opponent that'll be competitive on such short notice. Amanda is the most successful, and exciting female fighter in boxing.…

Thats cool she got a date, Last I heard about from her she was crying on twitter about a contract she signed that had her fighting in Hearn backyard. Lou Dumbilla her Promoter came out trying to put Hearn on…

Eddie Hearn tried to lowball her for the Katie Taylor fight.