Alvarez sees the potential for knockouts in all three scenarios.

The 41-year-old Stevenson (29-1-1, 24 KOs) will be after his 10th defense and seventh knockout during that time against Gvozdyk (15-0, 12 KOs) at Centre Videotron in Quebec City on Showtime following a grueling, toe-to-toe draw in May against two-division champion Badou Jack (22-1-3, 13 KOs). 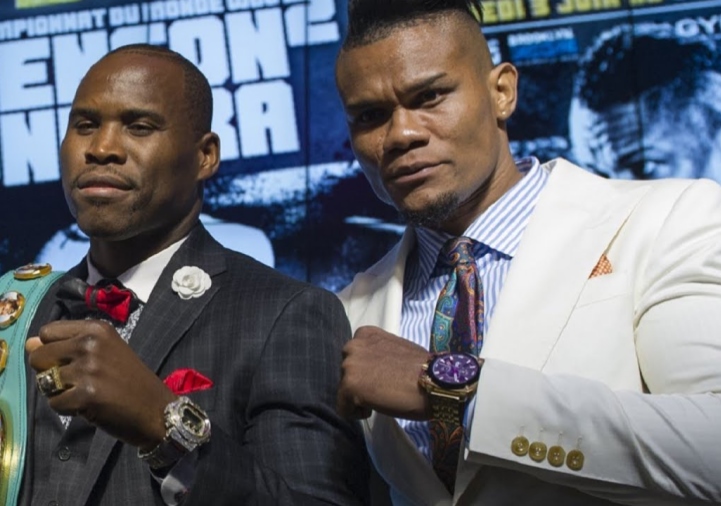 A 2008 Olympian from Colombia who moved to Montreal in 2009 to become a pro, Alvarez will be ringside in Quebec City to support heavyweight countryman Oscar Rivas (24-0, 17 KOs), who will face Fabio Maldanado (26-0, 25 KOs) on the Stevenson-Gvozdyk undercard.

“I’m going to be there because my best friend, Oscar Rivas, is fighting that night,” said Alvarez, among four division titleholders with Stevenson, IBF king Artur Beterbiev (13-0, 13 KOs) and WBA titlist Dmitry Bivol (14-0, 11 KOs). “But I’m also going to be observing Stevenson and Usyk with a lot of interest. I really think that Adonis is going to win that fight, and I think he’s going to win it by knockout.”

“I looked really good knocking out Lucian Bute, even better beating Jean Pascal, and better than that in my last fight with Kovalev,” said Alvarez, who shares trainer Marc Ramsay with Beterbiev, and promoter Yvon Michel with both Beterbiev and Stevenson. “After beating Kovalev again, I want Adonis Stevenson first. Then I want Dmitry Bivol. But everyone knows Artur Beterbiev and I have the same trainer, so that fight won’t happen any time soon.”

Storm” Alvarez displayed mobility, a rapier jab and granite chin, double-fisted power, and overcame a sixth-round cut beneath his left eye caused a head butt during “The Krusher’s” most devastating setback since an eighth-round stoppage in June 2017 to Andre Ward, who had won a decision over Kovalev in 2016.

“I’m the No. 1 guy at 175 because I fought and knocked out Sergey Kovalev, who was considered the best,” said Alvarez. “I never thought Stevenson wanted to fight me, and, now, with my KO of Sergey Kovalev, it’s going to be worse.”

As reported earlier by BoxingScene.com, Alvarez could rematch Kovalev on February 2 at The Ford Center at The Star, the Dallas Cowboys’ training facility just outside Dallas.

“I expect a tougher rematch against a better version of Kovalev, who should be more focused, motivated and concentrated after losing the title to me. But I feel like, right now, people see our rematch as a 50-50 fight, so I still have something to prove to Kovalev and to people in general. Two fights are never the same, but if a knockout happened for me the first time, then I can make it happen again,” said Alvarez.

“I’m going to focus on boxing well and doing my best, but if the opportunity presents itself against Kovalev, I’ll jump on it. As for Adonis Stevenson, everybody knows he’s a great puncher, and I have to fight a very smart fight. It’s never my objective to start a fight looking for a knockout, but I have demonstrated against Kovalev that if I stick to the right came plan, a knockout is something that I’m very capable of getting. If the circumstances present themselves for a knockout--like they did against Kovalev--then I’ll go for the knockout against Stevenson.”

[QUOTE=ceylon mooney;19294806]kovalev looked great til the KO.[/QUOTE] He gassed the round before, Kovalev still thinks he can fight like a 25-30 year old. If he accepts his age and tailors his style slightly to fit, he may get another year…

[QUOTE=gspm23;19291840]Wow, what an ignorant. Alvarez was Adonis's mandatory FOR " COMPLETE YEARS and never had the chance to fight him because ADONIS DUCKED him. After he was ASSURED he could fight Adonis after his fight against Pascal, WBC changed their…

The Nail will take Adonis into the late rounds and then pounce on him like he was prey for a jackal. Of course, he must avoid the left hook and Jack laid out the blueprint on how to do that.

[QUOTE=Adamsc151;19290277]Never mind Kovalev, it's looking increasingly certain that his days at the top are done. What about Bivol and Beterbiev? Marcus Brown looks ranked highly across the boards, Badou Jack similarly so. There's plenty of other decent established and up-and-coming…