Alicia Napoleon Very Motivated By The Fight For Equality

If things start going south for Schemelle Baldwin sometime during her title bout against WBA super middleweight champion Alicia Napoleon tonight, the challenger from Delaware may wish that Napoleon was allowed to play baseball for a living.

Yes, baseball. It’s the path Heather Hardy wanted to take as a kid growing up in Brooklyn until she was told that girls don’t play in the major leagues. Over in Long Island, Napoleon heard the same thing.

Twenty-eight years later, no one is telling Napoleon what she can and can’t do. She’s a world champion in the hardest game, a boxer on the rise and one getting more and more attention with each fight. Some would say she’s made it. But the way she sees it, her fight is just beginning, and it’s not just about boxing.

“What really motivates me is the fight for equality,” she said. “I’m really determined to see a change in the sport and I’m really determined to prove people wrong – the people who are against women in the sport of boxing, the people who are against women in general, whether it’s corporate America, Hollywood, sports. We are still suppressed in many ways. We’re not paid equally, we’re not given the opportunities that men are always given. It’s changing just a little bit, but not enough for my liking and not enough for a lot of women’s liking. And I’m determined to see that change and be a voice and that is one of the main things that keeps me motivated and keeps me in the sport.” 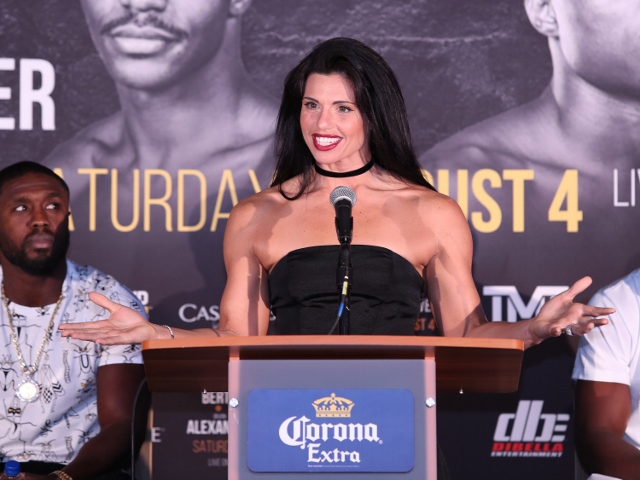 It’s the burden Napoleon and so many of her peers bear with each trip to the ring. Each interview isn’t just about the upcoming fight, but about the state of women’s boxing and what needs to be done to take the sport to the next level. There are the questions about money, about exposure, about networks and promoters either embracing or ignoring the ladies of the sweet science. It can be exhausting even before the first bell sounds, but Napoleon wants all the heat, both in and out of the ring.

So while her male counterparts can zero in on their opponent and nothing else, the Long Islander is juggling fighting, training, activism, a new marriage and the business world at the same time. About the only thing she can’t do is do an interview and her laundry simultaneously, though her phone signal was to blame on that one.

“I know I’m built for it,” she said. “It’s my will, it’s my determination and it’s my drive to not quit. And I do juggle a lot more. The men are very fortunate because a lot of them get paid what they should get paid, they can focus on being a professional athlete and providing for their family and nothing more. But me, in my situation, I’m fighting to be a professional athlete, I’m fighting to be a businesswoman and run a business and work a full-time job, I’m fighting to create these opportunities so I can change my family’s life. And of course, I’m fighting for equality. So I’m holding a ton of weight on my shoulders, but without the pressure, there’s no purpose, and greatness rises from that pressure. So it’s all good.”

Despite Baldwin’s unbeaten record (3-0-1), she’s not expected to topple Napoleon, whose edge in pro experience against legitimate competition is significant. So this likely won’t be the fight to test the multi-tasking of “The Empress.” But those fights will come, either at 168 pounds, where she currently reigns, or at 160. Junior middleweight may not even be out of the question, meaning that there’s a bright future for Napoleon inside the ring. As for life outside the ropes, she’s optimistic that she will see the change she wants.

“I am extremely optimistic,” Napoleon said. “I know that I am in this sport for that purpose. I know that God has a plan and a purpose for me and I’m getting closer to it each and every day, and I’m not gonna stop until I get there.”

[QUOTE=SteveM;20021970]it's really a lazy intellectual argument, actually it's not even intelligent. They're like, we're boxers so pay us the same amount of money but boxing is a form of entertainment and you get paid according to the audiences you bring…

[QUOTE=MeanestNiceGuy;20021663]:rofl: No objections from me! I've been watching women's track since the olympics a few years ago. Women's soccer is also cool to watch! [B]What Napolean fails to realize is, there are male fighters who don't get paid what they…

[QUOTE=SteveM;20021633]The only women's sport I have consistently watched over the years is women's tennis - I thing Chris Evert and Gabriela Sabatini probably had something to do with that, especially the latter. I've spent my whole life watching soccer so…

[QUOTE=MeanestNiceGuy;20021613]There's a nice batch of pretty women fighters and I'm here for it...mainly because they can fight, too. Keep promoting yourself and fighting meaningful fights, and you'll get paid accordingly. Sadly, there AREN'T a lot of noteworthy female fighters out…