In a fun fight between faded veterans in the twilight of their respective careers, it was Alfredo Angulo who proved to have a little bit more in the reserve tank.

The longtime contender dug deep to prevail in a split decision victory over former middleweight titlist Peter Quillin atop a PBC on FS1 quadrupleheader Saturday evening at Rabobank Arena in Bakersfield, Calif.

“This one was for all my fans who stuck with me through the years,” a humbled Angulo (26-7, 21KOs) stated in scoring perhaps his biggest win of the decade, via one of the more sizable upsets in a year already loaded with such outcomes.

It was certainly the most important fight of his career, at a point where they all count. The Mexican slugger—who now trains under the watchful eye of Abel Sanchez in Big Bear, Calif.—seemed to be outgunned in the early going versus Quillin, whom has equally seen better days as he’s yet to find his way following a lengthy middleweight title run earlier in the decade.

Still, the 36-year old from Brooklyn, New York entered as a 20-1 betting favorite and appeared to be the fresher of the two, utilizing every inch of the ring against a plodding Angulo, who according to punch stats would go more than five rounds before landing his first jab. The mover versus stalker strategy made for slow action out the gate, though effective for Quillin as the night would clearly indicate that his current punch resistance isn’t meant for grueling warfare.

It was far better than his last outing, an aborted two-round affair with Caleb Truax. Their April clash was to determine a mandatory challenger for unbeaten super middleweight titlist Caleb Plant, but ended in a No-Contest when a cut over Truax’s eye left the former 168-pound titlist unable to continue.

It was perhaps a blessing in disguise, as Saturday’s bout showed just how badly hurt Quillin—and even Angulo, the fight’s winner—can get hurt at the top level. 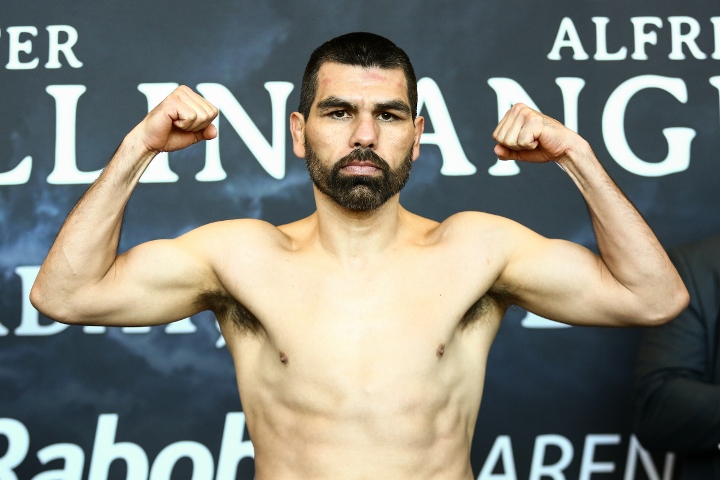 Action picked up considerably in round three, in large part due to Quillin opting to stand directly in the pocket. Angulo did his best to let his hands go, with most of the punches getting picked off but managing to connect with a left hook early and again late in the round. Quillin landed most of the significant shots in between, scoring with right hands at close range.

The lack of mobility on the part of the former middleweight titlist came at a considerable cost late in round four. Angulo caught a stationary Quillin along the ropes, connecting with a right hand and left hook to leave the 36-year old briefly stunned in the final 30 seconds of the round. It proved to be a pivotal sequence in the fight, as Quillin’s punch output and overall mobility slowed to a relative crawl from that point onward.

High drama resurfaced in a free-swinging round six. Once again, it was Angulo taking the lead and Quillin on the defensive and punching in reactionary mode. Chants of ‘Perro, Perro’ filled the venue, the partisan crowd raining down boos whenever Quillin dared to slow down the action. By the end of round six, he was no longer in a position to dictate the pace in that manner, with the 37-year old Angulo somehow the fresher fighter down the stretch.

Quillin kept his distance well enough to minimize Angulo’s attack in round seven, a much-needed frame as the fight was threatening to slip away along with any hope of ever again challenging for a title. It was also a stretch that saw a cut develop around his left eye, though ultimately proving inconsequential.

Angulo worked his way back inside in a wildly entertaining round eight. The frame ended with Quillin once again stunned, twice caught with overhand rights in the final minute of the round as he slowly made his way to the corner stool in between rounds.

The final two rounds held form but with Angulo less effective down the stretch. The 2004 Mexican Olympian continued to plow forward, but wasn’t as effective with his power punches. The complete absence of a jab denied him the ability to pin down Quillin, who was more effective fighting in reverse in the final six minutes but not to the point of avoiding the upset defeat.

“Mexican heart is difficult to overcome in the ring,” noted Angulo, who picks up his second straight win, the latest coming five months after scoring a 2nd round knockout of Evert Bravo this past April.

That win ended a two-fight skid, which came at the tail end of a rough five-year stretch that saw him suffer five losses in seven fights.

It’s clearly not the case for Quillin, who is pressed with a tough choice to make moving forward.

Saturday’s defeat was his first since a stunning 1st round knockout at the hands of Daniel Jacobs in their all-Brooklyn middleweight matchup in Dec. 2015. It ended a forgettable year that began with his coming in heavy for an attempted reclamation of a middleweight title he was forced to vacate after a two-year reign.

Whether there will come another fight remains to be seen.

“I’m going to sit down with my team,” Quillin admitted afterward, as far as he was willing to go in discussing the topic as emotions tend to run high after any given fight. “It’s hard to say in the moment while swallowing what happened. But we’re going to sit down as a team and decide what’s next.”

As for Angulo, Saturday’s win means at least one more night under the bright lights.

“Little by little, with each fight I improve,” insists Angulo. “Maybe my next fight, I look even better.”

[QUOTE=HarvardBlue;20079672]And you seem like a groupie defending your favorite fighter. Just find a Canelo fan club to join and work out these emotional outbursts.[/QUOTE] Emotional outbursts? Yeah ok. Just because I called you out for non-boxing related BS doesn't mean…

[QUOTE=theface07;20078945]And your point is? Canelo is a WAY better boxer but I guess understanding post fight interviews is more important right? You're not a real boxing fan, you are a pathetic joke who should be watching soap operas and reality…

[QUOTE=SHO_RULEZ;20075487]Like Erroll Spence...he'll box, if you want to do that. But if you want a phonebooth fight, he'll light you up there too :lol1:! Mikey thought he was gonna get inside and run Spence over, like that wimp Easter. Man,…