Welterweight prospect Alexis Rocha understands the road towards a world title opportunity will be tougher with each passing fight.

That was the case in his previous fight when Rocha had to overcome adversity. He will again be tested by a former contender who has nothing to lose and everything to gain, should he defeat Rocha.

The unbeaten prospect will face Brad Solomon tonight at the Honda Center in Anaheim, California. The 10-round bout will precede the main event between lightweight Ryan Garcia and Francisco Fonseca and will stream live on DAZN (9 p.m. ET/ 6 p.m. PT). 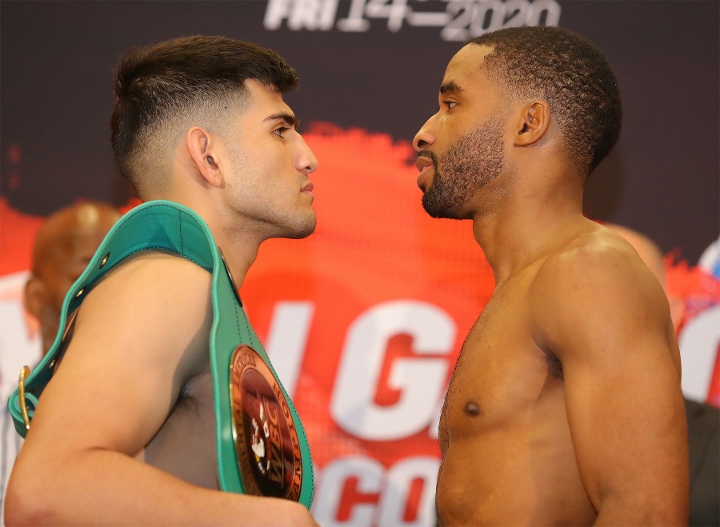 At Friday’s weigh-in, Rocha weighed 146.4 pounds, while Solomon weighed in at the welterweight limit of 147 pounds.

Rocha (15-0, 10 knockouts), who grew up less than 10 minutes away in Santa Ana, last fought on Dec. 13, stopping Mexico’s Roberto Valenzuela, Jr. after the fifth round. The southpaw was hurt in round 2 and had to overcome an offensive onslaught before breaking Valenzuela down prior to winning by knockout.

“I had to learn from that night,” Rocha told BoxingScene earlier this week. “I stood in the pocket too long. It’s good that I face adversity now so I could learn from mistake I make. I mentally had to be tough. Anyone who wouldn’t have been mentally tough would not have survived. I made adjustments and came out victorious that night.”

“As for Friday night (against Solomon), I’m up for the challenge. I’m not overlooking him. He’s going to bring his best, but I believe in myself and make progress as a fighter.”

Rocha is the younger brother of former world title challenger and junior featherweight contender Ronny Rios. The 22-year-old credits his older brother for pushing him in the gym and admits their competitiveness is more than just sibling rivalry.

Both fighters support one another and are each other’s fan. Rios will be ringside tonight for Rocha’s fight.

“The competitiveness between the both of us has been there since we were little,” said Rocha, who is promoted by Golden Boy Promotions. “Whether it’s running sprints, or running uphill, we push each other. Just by him being a world title contender makes me want to contend for a title at 147 pounds. We’re very close and we relate with one other. We care for each other. We see each other everyday since we live together. We have that special bond between brothers.”

An impressive victory tonight over Solomon could open more doors for Rocha later this year. He is a legit prospect, but could be on his way towards contending for a world title belt in a very competitive division.

Rocha is eager to face the best, but understands he needs to face and impressively defeat the likes of Solomon tonight. Bigger challenges on bigger platforms await, which motivates Rocha.

“I’m very ambitious and I have a lot of goals for myself, in and out of the ring. It comes from within me to have that drive and to really apply myself. I’m just very motivated for what the next chapter brings.”

“I have that drive in my to be successful.”