Heavyweights Alexander Povetkin (9 of 33) and Hughie Fury (7 of 25) combined to land 16 of 55 punches per round. The heavyweight average for one fighter is 15 of 45 per round. 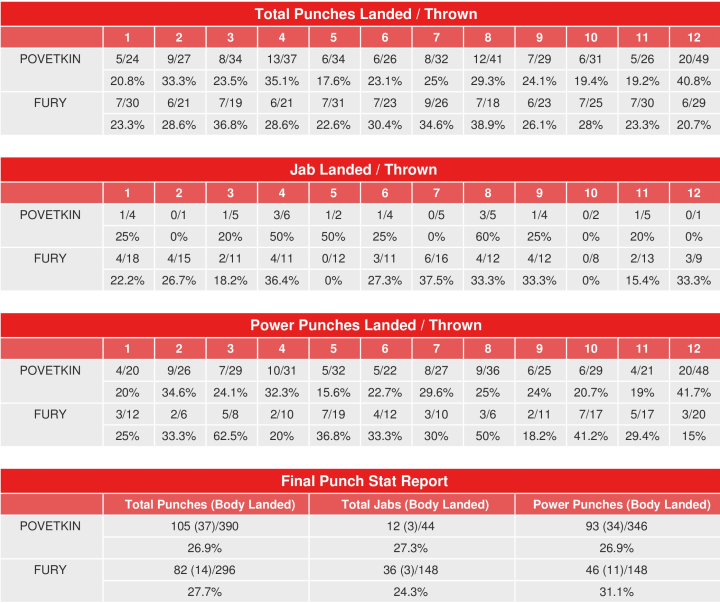 Povetkin (35 wins, two defeats) was back in action for the first time since being comprehensively stopped by Anthony Joshua 11 months ago and landed the heavier shots, operating as the aggressor throughout a bout for the WBA's international strap.

Fury, the cousin of former unified heavyweight king Tyson Fury, slipped to a professional record of 23-3 as a cut left eye further hindered a fruitless operation over the closing rounds.

As on his previous steps up in class to face Joseph Parker and Kubrat Pulev, Fury lacked the attacking ambition to halt Povetkin's punishing assaults and dropped a 117-111 verdict on all three scorecards.

[QUOTE=Lunchbucket;20031637]I've been saying this for a while. Hughie Fury is Euro level.[/QUOTE] Yes, at most. Probably the likes of Kabayel could even beat him.

Didn't watch it because Hughie has become too much of a bore to watch but I'm unsurprised at the results. Povetkin was coming off injuries and looked like absolute dog shyt, as if he hadn't even trained, and he still…

[QUOTE=Tecnoworld;20029427]Hughie is just not at this level. He is a decent big boxer who should fight foes ranked #25 or lower.[/QUOTE] I've been saying this for a while. Hughie Fury is Euro level.

This weekend delivered us - once and from all one hopes - from the two most feared "H"s in boxing, Hughie and Horn.

Hughie is just not at this level. He is a decent big boxer who should fight foes ranked #25 or lower.