The former WBA heavyweight champion overcame a third-round knockdown to knock out David Price in the fifth round on the Joshua-Joseph Parker undercard at Principality Stadium in Cardiff, Wales. Russia’s Povetkin (34-1, 24 KOs) dropped England Price (22-5, 18 KOs) once apiece in the third and fifth rounds.

The 38-year-old Povetkin’s victory helped him maintain his status as the WBA’s mandatory challenger for the Joshua-Parker winner. Promoters for Povetkin and Price have discussed Joshua opposing Povetkin next if he gets past Parker in the main event Saturday night. 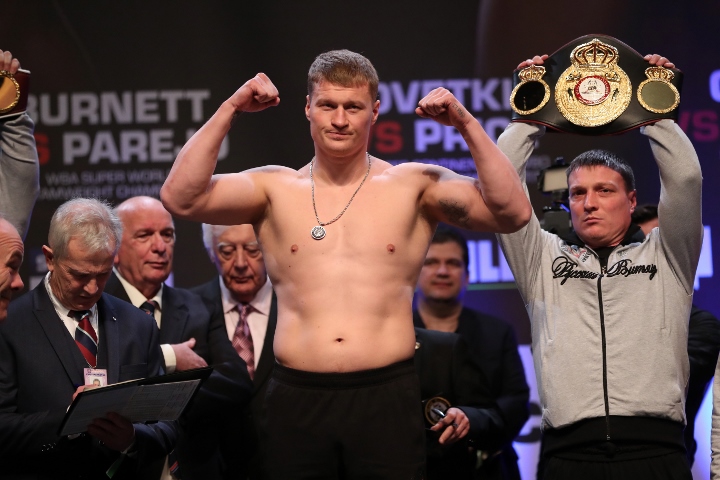 Price, once considered a potential star in the United Kingdom, suffered the fifth knockout defeat of his nine-year pro career.

He finished off the 6-feet-8, 256-pound Price with a vicious left hook that knocked Price flat on his back early in the fifth round. Povetkin hurt Price with an overhand right to the side of his head that left Price wide open for the crushing left hook that ended their fight.

Referee Howard Foster counted out Price soon after he hit the canvas.

Povetkin spent the fourth round carefully trying to get his legs back under him after suffering a knockdown during the third round. Price largely controlled those three minutes with his jab.

Povetkin’s left hook knocked down Price with just over two minutes to go in the third round.

Price pounded his gloves on the canvas and appeared more angry that he got dropped than he was hurt. He got up and fired hard shots of his own to keep Povetkin from capitalizing on that knockdown.

Later in the third, Price caught Povetkin with a counter left hook that wobbled Povetkin and backed him into the ropes. Foster correctly called it a knockdown because the ropes held up an off-balance Povetkin.

The round ended soon thereafter, which might’ve saved Povetkin from further trouble in the third.

Povetkin got around Price’s guard with a right-left combination late in the second round. Neither fighter did much during the first round, until Price hit Povetkin with a short left hook just before that opening round ended.

Wo Price did well, excellent win for Povetkin!

[QUOTE=Mr Objecitivity;18628280]In an even playing field, yes. But not with the bias judges and referee that Joshua had for his fights against Joseph Parker, Carlos Takam and Wladimir Klitschko. The location of the fight matters heavily.[/QUOTE] Yea the ref is…

[QUOTE=PunchyPotorff;18627502]Quote: Originally Posted by PunchyPotorff View Post Like I said elsewhere recently.... isn't that wild? Povetkin, actually showing up, on a Joshua undercard, so he gets noticed at a Joshua event and that much closer to a shot at Joshua.…