Alexander: I Thought I Edged Andre Berto, But It Was Close

"I knew he was going to be quick and I knew he'd come to fight," said Berto. "I had to get adjusted to his speed a little bit and then I started pressing him. I felt like I was in better shape and quicker to the target than he was."

Alexander struck first as his southpaw stance appeared to give Berto trouble early. Alexander connected with a series of powerful right hooks in round two before following up in round three with a straight right that landed on Berto and allowed Alexander to score a knockdown with follow-up hooks. 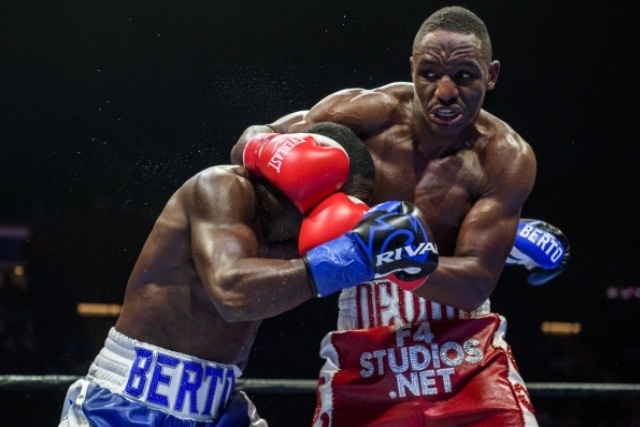 "We knew that we had enough power to hurt him and I felt like I was doing that early in the fight," said Alexander. "I slowed down in the middle of the fight, but there's no excuses. We both came to fight."

The bout saw numerous clashes and tie ups, but as the rounds went on Berto's relentlessness allowed him to score against a tiring Alexander. Berto had success in the seventh round tagging Alexander on the inside as he began to break through his opponent's defense.

"I've been off for a while but I felt good in there," said Berto. "He was pulling back on a lot of his punches so I stepped in for my combinations and made him pay. This is a tremendous feeling. I'm looking forward to getting in there and doing it again.

The back-and-forth fight concluded with both fighters slugging it out until the final bell and appearing to have worn each other down from the 12-round bout. The scores reflected the close nature of the bout as once judge scored it 114-113 for Alexander, but was overruled by two judges scoring the bout 115-112 for Berto.

"I thought I edged it out, but it was a close fight," said Alexander. "We're climbing back still. This happens. I'm going to talk to my team and see what the best move is going forward."

It was a good scrap. Alexander looked good til rd 6. Problem is he wasn't given credit for that time. Instead the judges decided to use the last 6 rds to determine the entire 12. Typical BS. They forgot why…

They might as well fight each other again because NO top welterweight will fight them. It’s a business too and it’s no money in fighting either of them. Berto or Alexander in with a top welterweight, isn’t a compelling fight…

It was an entertaining fight. I thought the right fighter won, but could have went the other way. Devon never lived up to the early hype in his career. He’ a fighter with great ability but not a great boxing…