After Besputin’s dominant performance Friday, the Russian is a step closer to landing a fight much higher on the bout sheet with a lot more fans in attendance. 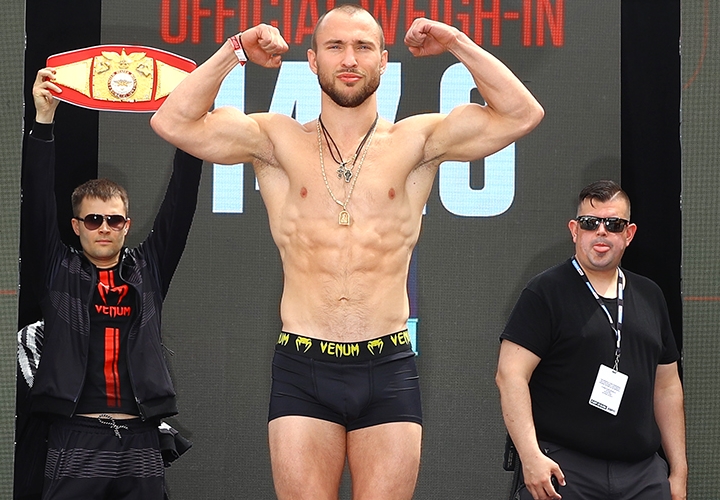 In the first two rounds, Blanco came out swinging and managed to open a gash over Besputin’s right eye. Besputin waited out Blanco’s early barrage before taking over in the third round.

Besputin, who fought from a wide stance, smothered the Argentinian with straight lefts. By the sixth round, a fatigued Blanco struggled to keep his hands up.

Although Besputin had no trouble against Blanco, it’s not a good look that he was unable to knock out the 29-year-old veteran. Besputin entered Friday with nine knockouts since turning pro in 2015.

But with Top Rank in need of welterweights it might not matter, when it comes to Besputin landing a title shot against Crawford, who fights Amir Khan for an ESPN pay-per-view bout on April 20 from Madison Square Garden.

“(Blanco) had a very uncomfortable, awkward style, which made it difficult for me to find my rhythm,” Besputin said. “Most importantly, I got the win, and we can move on to bigger fights.”

The following fight on the card only lasted 49 seconds thanks to a big right hand from heavyweight Guido Vianello.

Vianello recorded a first-round technical knockout against Lawrence Gabriel, who went down not long after the right flush from the Italian.

Vianello, who’s trained by Abel Sanchez, immediately went for the finish as soon as he had Gabriel hurt near the corner of the ring. Vianello improved to 4-0 with all knockouts.

"I believe this was my strongest performance to date, and I'm only going to get better and better," Vianello said. "My power is improving with every fight."

In a phone booth type of a fight, Alimkhanuly defeated Cristian Olivas by unanimous decision (100-90, 100-90, 99-91). Alimkhanuly controlled the inside with jabs and body shots against his Mexican foe.

The third fight of the night was a six-round welterweight scrap between Ruben Rodriguez and Ramel Snegur. Rodriguez got the nod with scores of 38-38, 39-37 and 40-36 for a majority decision.

The main card for Lomachenko-Crolla streams on ESPN+ at 11 p.m. EST/8 p.m. PST, starting with the co-main event of Gilberto Ramirez versus Tommy Karpency.

[QUOTE=Boxing Logic;19654084]Why is everyone being so critical then? I see it all over social media "oh Arum hyped another white guy up" or something. I always thought Besputin looked super super impressive, just small for 147, but skills super impressive.…

[QUOTE=Boxing Logic;19654084]Why is everyone being so critical then? I see it all over social media "oh Arum hyped another white guy up" or something. I always thought Besputin looked super super impressive, just small for 147, but skills super impressive.…

[QUOTE=pillowfists98;19654049]Besputin looked fine. He won every single round but he was in there with a guy who was very tough and never been stopped. He had an extremely awkward style as well.[/QUOTE] Why is everyone being so critical then? I…

[QUOTE=Boxing Logic;19654001]I didnt see the fight. Is it just his power that is suspect or something else too?[/QUOTE] Besputin looked fine. He won every single round but he was in there with a guy who was very tough and never…

[QUOTE=bulldognyc;19653982]I watched this fight after reading high ratings about this guy from this site. Wow, was I disappointed. Absolutely uneventful for a guy with this much hype. Bud is going to destroy this dude when arum put together another in…