Alexander Besputin on Top Rank's Fresno Card on May 26

According to TASS media agency and its pundit Igor Lazorin, rapidly rising Russian former amateur standout Alexander Besputin (9-0, 7 KOs) will be part of a huge night of boxing, which is pre-planned to take place on May 26 at the Selland Arena in Fresno, California, under Bob Arum and Eddie Hearn co-promotion, and which will be aired by the ESPN+.

Besputin, 27, is 2012 Russian national and 2013 European welterweight champion. He made his transition to the pro game in late 2015 and was on a fast track ever since, his resume including stoppage wins over 20-0 Juan Ruiz and 14-1 Wesley Tucker, as well as a dominating decision over well-known Colombian gatekeeper Breidis Prescott. 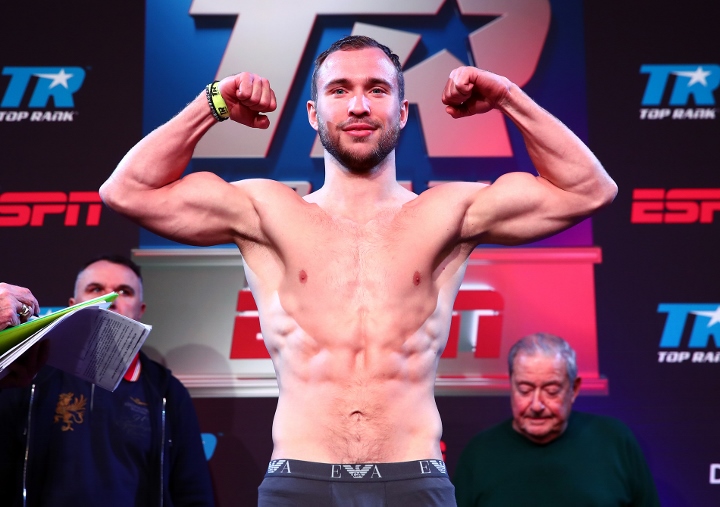 Corral, 31, has been competing for almost twelve years. He has lost every time he has crossed the board of his native land.

IN OTHER NEWS: On Saturday night, May 12, JOEL "BIG JOE" DJEKO (now 13-2-1 7KO's) took to the bright lights of the Versluys Dome in Ostend, Belgium in search of not only his 13th victory, but the IBO Continental Cruiserweight title. Across from him stood no easy task in undefeated Argentine, MARIANO GUDINO (now, 12-1 7KO's).

Gudino came out of the gate fast, using his quickness to evade the attack of Djeko. Through the first half of the fight, it was an even grudge match as Djeko and Gudino consistently exchanged blows at center ring, bringing the fans to their feet.