Ajagba: Time Away From Ring Was Frustrating, Hurts To Not Be Able To Do Something You Love

Even during a pandemic, Efe Ajagba managed to accomplish everything that a boxer can get done in order to stay ready for a fight.

All that he needed was for the phone to ring.

“Even though I haven’t been in the ring, I have done everything to stay in shape,” Ajagba told BoxingScene.com of how he has spent the past six months. “I have been training a lot. We have done a lot of sparring, a lot of swimming, a lot of jogging.

“That was really good for me, to keep in shape and be ready to come back.” 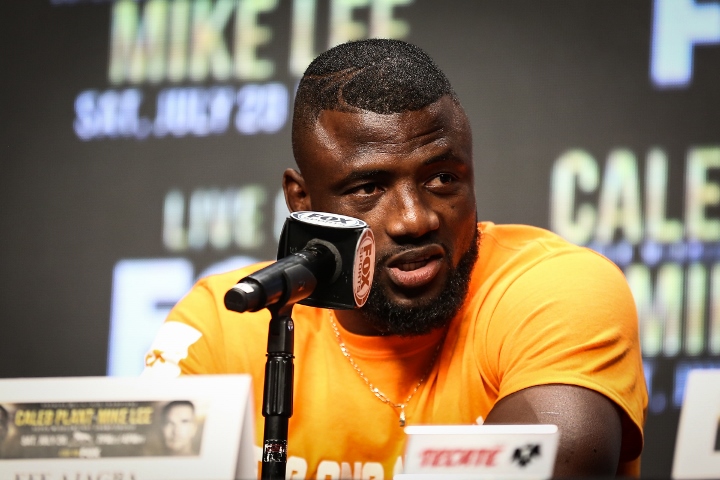 The moment comes with an entire new team in tow.

The unbeaten Nigerian heavyweight prospect from the greater Houston area has spent most of his career fighting under Richard Schaefer’s Ringstar Promotions and showcased on Premier Boxing Champions (PBC)-branded events. His upcoming bout with Jonathan ‘Jonnie’ Rice (13-5-1, 9KOs)—which takes place this Saturday live on ESPN+ from The Bubble in Las Vegas—will mark his first since signing with Hall of Fame promoter Bob Arum’s Top Rank and inking an advisory pact with James Prince.

It will also serve as his first fight under the guidance of head trainer Kay Koroma, who replaces career-long coach Ronnie Shields.

“Coach Kay is really good for me. He is so very knowledgeable and has passed along a lot of wisdom to me. He’s taught me to be smart in the ring. He’s teaching me the proper way to box, to punch and to fight with more control.

“Working on these tools and also doing all these new things that I haven’t done while preparing for a fight, it has made this camp even better than the ones in the past. I was able to concentrate a lot more in this camp.”

Ajagba is coming off of a 9th round stoppage of Razvan Cojanu this past March at Barclays Center in Brooklyn, New York. The bout aired live on Fox, as did his off-the-canvas 5th round stoppage of Iago Kiladze in their instant classic last December in Ontario, California.

The six months between fights heading into this wekend—serving in supporting capacity to a junior welterweight contest between Jose Pedraza (27-3, 13KOs) and Javier Molina (22-2, 9KOs) represents the longest inactive stretch of Ajagba’s young career. On the bright side, it gave him more time to prepare for this weekend’s ring appearance.

On the other side of the equation, it’s meant six months out of the ring.

“There were times when it was frustrating. It hurts to not be able to do something that you love,” admits Ajagba. “But I’m excited to be fighting again on this platform and with Top Rank.

“It’s my first fight with a new team and I am excited to show all of my fans what that will look like this Saturday night.”

[QUOTE=Mammoth;20768866]Maybe Hrgovic needs to go to Top Rank then[/QUOTE] Hrgovic already fought Molina in less fights and is highly ranked so ......Hunter declined to fight Hrgovic which would have got him even closer to a mandatory elimination. Efe has no…

[QUOTE=REDEEMER;20768859]Ajagba leaving PBC is good for a fast track, had he stayed he would have been another Wilder and now you can’t get away with that without being ridiculed with social media all over which is going into your 30…

Ajagba leaving PBC is good for a fast track, had he stayed he would have been another Wilder and now you can’t get away with that without being ridiculed with social media all over which is going into your 30…

[QUOTE=Slimpack;20768786]Ajagba said Coach Kay is good for him but I doubt that. After 13 fights, the coach should've turned him into a moving machine. Ajagba is very strong but lack movement. He need to learn to move swiftly.[/QUOTE] Wouldn't that…

Ajagba said Coach Kay is good for him but I doubt that. After 13 fights, the coach should've turned him into a moving machine. Ajagba is very strong but lack movement. He need to learn to move swiftly.