That’s how long it has been since Adrien Broner indisputably, impressively won a fight. The only victory Broner has recorded since stopping Ashley Theophane in the ninth round of their April 2016 fight was a 10-round, split-decision win against Adrian Granados in February 2017.

One could justifiably argue Granados deserved to win that night – judge Phil Rogers scored Granados a 97-93 winner – or that their fight at least should’ve resulted in a draw. In the four years that have passed since the Granados fight, Broner has suffered decisive defeats to Mikey Garcia and Manny Pacquiao in 12-rounders and settled for a 12-round majority draw with Jessie Vargas.

What Broner desperately needs Saturday night in his return from a two-year layoff is to dominate Jovanie Santiago. The 31-year-old Puerto Rican is unbeaten, but he has been brought to Mohegan Sun to help make Broner look good in an appearance that is supposed to lead to a more dangerous, intriguing fight later this year.

It is impossible to know, however, if Broner is even capable of that type of performance at this point, despite that he’ll face an unproven opponent who will take a steep step up in competition.

The infamous four-division champion emphasized again at a press conference Thursday that he is just 31 years old, still in his physical prime. Though not literally old, Broner might be an old 31 based on how hard partying and unhealthy fluctuations in weight could’ve affected his body.

Broner told BoxingScene.com recently that he had to lose “over 35 pounds” for this fight. He wouldn’t say exactly how heavy he was when he entered training camp late in November, but he obviously had difficulty dropping all of his excess weight because the contracted weight for their 12-round fight was changed this week from the junior welterweight limit of 140 pounds to the welterweight maximum of 147.

That provided proof that in spite of Broner saying seemingly for the one-millionth time in the buildup toward this fight that he has changed his ways and taken training more seriously, that this tired narrative remains the same. What absolutely must change Saturday night is how he performs.

Broner wants to fight three times this year, in part because he needs to pay off $830,000 in damages from a civil judgment related to an incident with an unidentified woman in June 2018 at a Cleveland nightclub. The Cincinnati native needs to look good against Santiago (14-0-1, 10 KOs) to build some momentum toward a higher-profile fight that could take place late in the spring or early in the summer.

Regis Prograis and Mario Barrios have been mentioned as potential opponents if Broner beats Santiago. They’re both 140-pounders and there’s obviously no evidence Broner can get down to the junior welterweight limit again, even for a shot at Barrios’ WBA world super lightweight title. 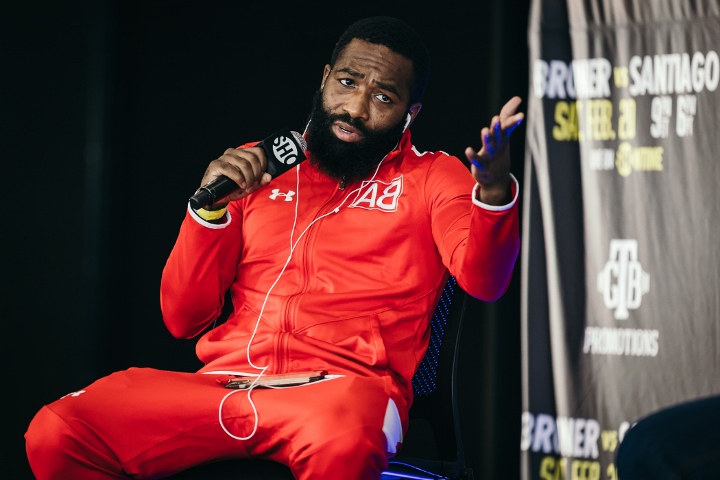 The Prograis fight is more appealing, yet not the pay-per-view event some seem to think. Regardless, Broner (33-4-1, 24 KOs, 1 NC) declined to address future fights Thursday.

“The overall goal is, you know, to get past this fight first,” Broner said. “In boxing, you can’t look past no opponent. I don’t care how everything looks on paper. You can’t look past no opponent, because in boxing you’re only one punch away from a knockout. And that’s on both ends. So, you know, what I’ve gotta do is go in, get my victory, get my hand raised first, and then we’re gonna go to the drawing board. So, you know, the plan for me is to get my victory on Saturday night.”

He’s right to be cautious, of course, primarily because nothing should be considered a foregone conclusion as it relates to this version of Adrien Broner. His timing won’t be quite right Saturday night after such a long layoff and who knows how much making just the welterweight limit in this training camp took out of him?

Handicappers apparently agree, as they’ve installed Broner as only a 9-1 favorite versus Santiago. If nothing else, Santiago figures to apply pressure and truly try to capitalize on the biggest opportunity of his life.

“I didn’t want a easy fight, so I picked a guy like Jovanie because I know he’s gonna push me and bring the best out of me,” Broner said. “I know he’s a good fighter, he’s an undefeated fighter, and he has nothing to lose.”

Broner clearly has everything to lose, since even the faithful fans who’ve remained fiercely loyal to him might give up hope if Santiago pulls off an upset.

As it stands, those who’ve invested in Broner’s career expect viewers to tune in for Broner’s first fight since Pacquiao beat him by unanimous decision in their Showtime Pay-Per-View main event in January 2019.

“For everything he has gone through in and out of the ring, he is still one of the most well-known, well-recognized, active fighters in the sport today,” Showtime’s Stephen Espinoza told BoxingScene.com. “When you talk about recognition among casual fans and non-fans, he does have a level of awareness that brings people to his fights. Now, that alone doesn’t earn you a way onto premium TV. The fact is he does have a resume, he does not hesitate to take on quality opposition and he still generates a lot of interest when he gets in the ring. People will watch and people will generally be entertained when Adrien Broner fights.”

Broner undoubtedly draws higher ratings than any other fighter that regularly appears on Showtime. This fight could test his drawing power more than some of his previous appearances because Santiago is completely unknown and there could be at least some overlap between Broner-Santiago and ESPN’s much-anticipated, 130-championship bout between Miguel Berchelt and Oscar Valdez.

However viewership plays out, “The Can Man” cannot allow Santiago to legitimately test him. Broner needs to demonstrate that Santiago doesn’t belong in the ring with him, which will require him to be much more aggressive and active than he has been in his past few fights.

After all, nearly five years is an extremely long time for a supposed championship-caliber boxer to go without winning a fight in indisputable, impressive fashion.

“Once the bell ring,” Broner said, “and they see me from the first round, it’s gonna remind them how important I am to boxing and what they’ve been missing.”

Broner has always talked a great game, but rarely delivered in recent years. Whether he is capable of walking the walk, even against an unproven underdog, that’s a question only Broner’s actions can answer Saturday night.