Yvon Michel, promoter for former world champion Adonis Stevenson, has given an update - revealing that his boxer's condition "has gone from critical to stable" after suffering an injury in his loss of the WBC and lineal light heavyweight titles to Oleksandr Gvozdyk in Quebec City on Saturday night.

Stevenson, 41-years-old, boxing's oldest and longest-reigning champion, suffered an eleventh round knockout on Saturday, slumping after a flurry of punches.

He was put on a stretcher before being taken to hospital by ambulance. He was then placed in intensive care. 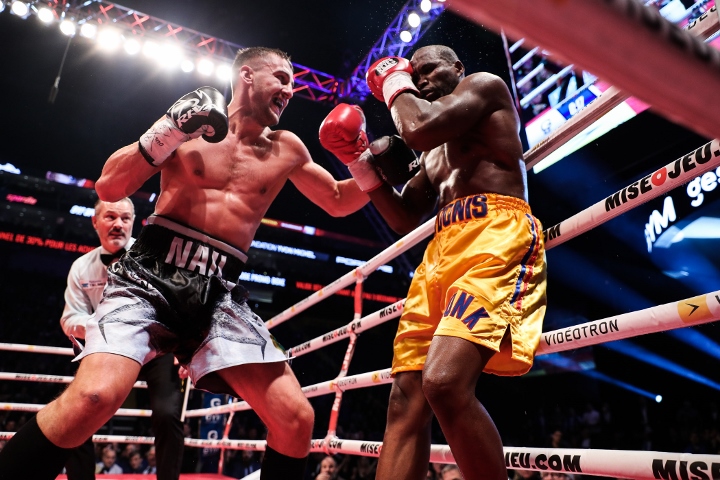 On Sunday morning, it was disclosed that Stevenson had a hemorrhage on the brain and was placed in a medically induced coma to relieve swelling.

"The state of Adonis Stevenson has gone from critical to stable," Michel stated.

"I was at the edge of the ring. I saw that Stevenson was in bad shape when he fell. I [presumed] that he suffered a concussion. Of course, when you fall like that, facing a light heavyweight boxer ... It's amazing how powerful these guys are. At that moment, everyone was jumping all over the ring because there was a new world champion. Later, in the middle of the night, Yvon Michel phoned me to tell me that Adonis was in the intensive care unit of the hospital. It didn't not look good because we do not give a bed just like that in intensive care ... We're crossing our fingers. We hope it's not that bad and it's going to be okay," Barre said.

Stevenson had to get help to get back to the locker room, but Michel said after the fight that he had spoken to Adonis and that the latter seemed to have regained his senses, at least enough for Michel to handle the rest of the event.

The sequence of events is more confused. Stevenson was not himself after coming out of the shower and Dr. Francis Fontaine, who was not the doctor assigned to the event, decided to immediately see him in the hospital. Stevenson is currently at the Enfant-Jésus de Québec, a hospital specializing in neurosurgery and head trauma.

Before getting into the ambulance, Stevenson looked blank and seemed lost. A person in the locker room who requested anonymity indicated that by the time Dr. Fontaine made the decision to send him further examinations, Stevenson was no longer able to stand on his own.

"I talked to the people at the hospital. He was confused when he arrived. We feared a concussion. This is very worrying,  Michel said in a press briefing Saturday.

Stevenson was making his 10th title defence since winning the belt in 2013 by defeating American Chad Dawson.

He successfully defended the title against Britain's Tony Bellew.

Gvozdyk, who won an Olympic bronze medal for Ukraine at the London 2012 Games, claimed the belt in his first shot at a major title.

I hope Adonis recovers well, and sets off into the sunset after this fight. I wouldn't sanction any future fight of his if I were any commission with half a brain.

His physician at that hospital, Dr. Turgeon, is an expert in critical care--which includes traumatic brain injury [TBI], anesthesiology and epidemiology. He is conducting state of the art research on the use of blood transfusion variations for TBI patients. That…

[url]https://www.rds.ca/combat/boxe/boxe-adonis-stevenson-souffre-d-un-traumatisme-craniocerebral-grave-1.6479304[/url] Above is the translated PR from the hospital and Dr Turgeon, who said Stevenson is likely to suffer sequelae from his injury. It includes video in French. Below is translation, Google I think.: It includes: "You saw him on…

Adonis Stevenson “suffers from severe traumatic brain injury” "His condition requires mechanical respiratory assistance, deep sedation and specialized neurological monitoring. It is too early to comment on Mr. Stevenson's long-term prognosis. I urge the media to be very cautious about…