Adonis Stevenson retains his WBC light heavyweight title, but barely, against the hard-luck Badou Jack, who absorbed his second draw in a title fight in his last three bouts. Jack won his rounds much bigger than Stevenson -- in rounds 7-11 alone he led 114-40 overall -- but in the round-by-round breakdowns Jack led just 6-5-1 in total connects. 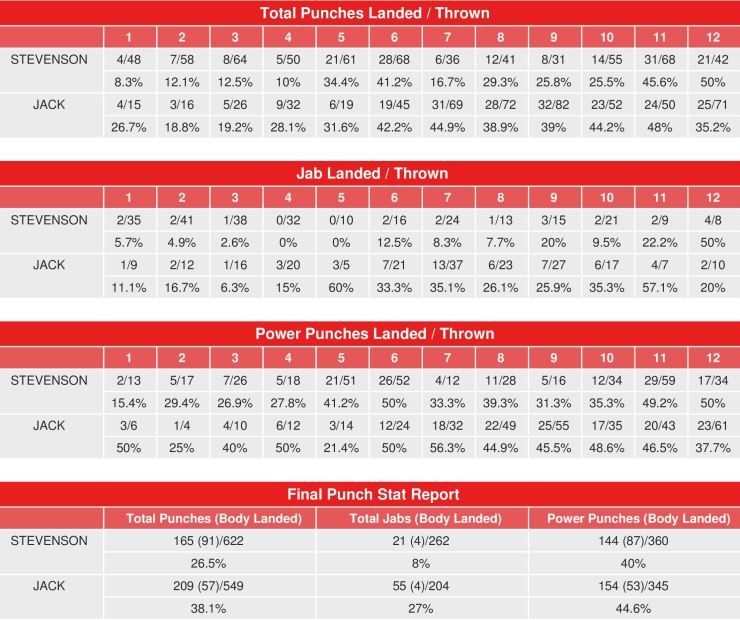 It was a grueling, riveting fight, with both men enjoying stretches of success. Jack was the one administering punishment when it ended, however.

Jack rode out Stevenson’s early power and began to take it to the Canadian champion from the seventh round on at the Air Canada Centre. The Las Vegas-based Swede showed resolve and courage in biding his time against the 40-year-old Stevenson, who tired as the fight wore on.

Jack was busier in the latter rounds with Stevenson seemingly unable to turn on the power.

Stevenson won 4 of the first 6 rounds and 2 of the last 6 so a draw is the correct decision. A lot of dumb folks think because Jack won his rounds more convincingly he should have been awarded the…

Jack really tore into him in the 2nd half of the fight. But made a strategic error to start slow. By slow I mean really slow.

Draw was correct but Jack beat Adonis TF up.