Adonis Stevenson To Badou Jack: Rematch Must Be in Canada!

The bout ended in a majority draw, which didn't satisfy either boxer. 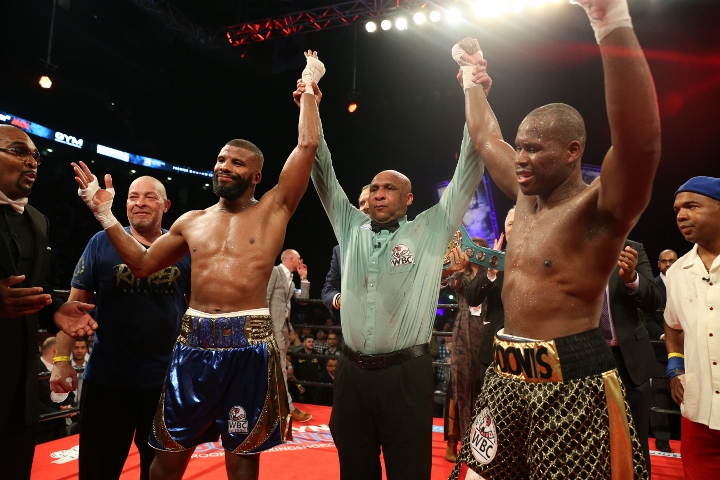 Stevenson, who had not fought since stopping Andrzej Fonfara in their rematch last June in Montreal, dominated early but struggled late as Jack bloodied the champion's nose in the eighth round and controled the pace to the finish.

Stevenson's record went to 29-1-1 while Jack settled for his fourth career draw against 22 wins and a lone defeat.

All three judges awarded Jack the 12th round to lift him into the draw, which could set the stage for a title rematch.

Jack is ready, but wants Stevenson to fight outside Canada for the first time since September 2011.

Stevenson extended the second-longest active reign in boxing. He knocked out Chad Dawson for the crown in 2013 and since then stopped six of eight prior foes with two other victories by unanimous decision.

Stevenson made it clear that any rematch would have to head back to Canada.

Because of Stevenson's criminal record, he's unable to fight in the United States - but he's not interested in fighting anywhere else either.

"The belt is in Canada, so if he wants it he has to come here to get it. It's not for him to decide [where the rematch takes place], because he's not the champion," Stevenson said.

"There are not a lot of world championship fights being held in Canada and it's good for the development of the sport. Fights like these to inspire young people."

[QUOTE=Squ□redCircle34;18795683]Bro, he literally be beating these guys to a pulp and still get a draw; how is the onus only on HIM in boxing where he has to KO EVERY opponent just to get a win!? He had Adonis holding…

[QUOTE=nacho daddy;18794758]he gets the short end of the stick CAUSE HE DONT KNOCK THEM THE PHUCK OUT. who died and made you the boxing genius. Ali not a hard puncher being way more skilled then jack still was able in…

[QUOTE=Squ□redCircle34;18794348]Bruh wtf are you talking about? You sound like a certified casual right about now! There's plenty of fighters in the history of the sport that don't necessarily punch hard in their division or in boxing terms but they were…

[QUOTE=nacho daddy;18792358]jack will never beat top competition cause he don't punch hard enough . he is skilled but a notch below the best and don't hit hard enough. if he hit harder with same skills he would be champ[/QUOTE] Bruh…

[QUOTE=Corelone;18792250]Why go to so much trouble? All he has to do is kiss the orange ring and repugs could care less if he's a pedophile or other criminal. He might even get a pardon.[/QUOTE]^^^Triggered