Adan Gonzales: Robeisy Ramirez Must Smoke Crack If He Thinks He Won Our Fight

Gonzales believes he dominated Ramirez in the two-time Olympic gold medalist’s pro debut. Denver’s Gonzales scored a knockdown 22 seconds into their four-round featherweight fight and won it by split decision.

“He must be smoking some crack to say that,” Gonzales told BoxingScene.com. “He’s on some drugs if he thinks he won, because he got his ass whupped every round, every single round. I don’t know how he feels like he won that first fight. If he keeps telling himself that, then he’s definitely gonna lose this second fight. He has another thing coming.” 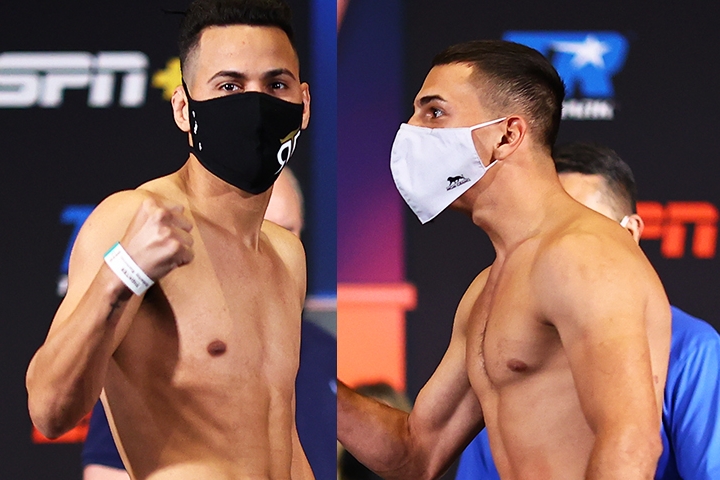 “I believe I won that fight,” Ramirez told BoxingScene.com. “But that’s my opinion, the same way that the judges have their opinion on that night. There was a quick knockdown, where I wasn’t really hurt. It was more of a push and me being off balance, but you know, it happened. My gloves touched the canvas and the judges scored the round that way against me. But after that knockdown, I dominated the other three rounds.”

The 26-year-old Ramirez (3-1, 3 KOs) will get his opportunity to avenge that loss Thursday night. The Cuban southpaw and Gonzales (5-2-2, 2 KOs) will square off again in a six-round featherweight fight that’ll open ESPN’s six-bout broadcast at 8 p.m. ET/5 p.m. PT from MGM Grand Conference Center in Las Vegas.

Gonzales respects Ramirez, but he takes issue with the accomplished amateur’s perspective on the huge upset Gonzales recorded nearly 11 months ago at Temple University’s Liacouras Center in Philadelphia.

“I feel like it may have been a flash knockdown, but nonetheless, I still hurt him,” Gonzales said of the left hand he landed that caused Gonzales to use both gloves to keep himself from falling to the canvas. “I got to him. I knocked him off his right foot. He wasn’t able to keep it planted. And for the rest of the fight, I felt like I was in control. I knocked off his momentum. He wasn’t able to find it again. Going onward with the fight, I was just sticking and moving, and he wasn’t able to set up any of his punches, because by the time I threw a couple jabs and a combination, I was out of the way.

“I was gone and he wasn’t able to set. He had to come back, follow me and then reset. He don’t really know what to do with me in that sense. This time maybe I’m expecting him to do something a little bit different. But there’s only so much he could change. Ramirez is Ramirez. Since 2016, he’s been the same dude.”

I like Adan's attitude, he has the right to brag after winning a fight that no one thought he could win. Ramirez is about to put some hands on him tho.

[QUOTE=LAchargers373;20639563]Bradley got smoked in all 3 fights no question lol. Like I said I’m not sure what fight u were watching robeisy got outlanded in 3 out of 4 rounds and dropped in the 1st.I’ll admit a couple rounds were…

Robeisy should win this fight, but he did get blown out in the first fight. Probably only won 1 round.

[QUOTE=kidbazooka;20639336]Idiot lol You probably think Bradley beat Manny in the first fight too just cuz “judges saw it that way” Lol damn noobs[/QUOTE] Bradley got smoked in all 3 fights no question lol. Like I said I’m not sure what…