Adan Gonzales didn’t know he owed Robeisy Ramirez a rematch until he tried to arrange another fight for December in his hometown of Denver.

That’s when Gonzales realized that there was an immediate rematch clause in his contract for their four-round featherweight fight last August 10 that prevented him from fighting anyone other than Ramirez next in the event that he pulled off an upset in the two-time Olympic gold medalist’s pro debut.

“I must’ve skimmed through [the contract] too fast or something,” Gonzales told BoxingScene.com. “Because when I signed that [one-page Pennsylvania Athletic Commission] contract the first time, I signed it in Denver. I read the first contract. I was thorough about it. I went through it and I didn’t see anything about a rematch clause. But when I got to Philly, they had me sign another contract. I thought it was gonna the same exact sh-t, but it wasn’t.”

The second four-page contract promoter Top Rank provided Gonzales once he arrived in Philadelphia legally obligated Gonzales to their second featherweight fight Thursday night. ESPN will air their six-round rematch as the opener of a six-bout broadcast set to start at 8 p.m. ET/5 p.m. PT from MGM Grand Conference Center in Las Vegas.

For Gonzales, their rematch is an opportunity to prove that his split-decision victory over Ramirez wasn’t an aberration.

“The first time, honestly, was just putting a sheet over his face,” Gonzales told BoxingScene.com. “The second time, I’m trying to put the nail in the coffin. I thought things were gonna change from beating him the first time, but I guess they thought it was a fluke. So, coming back the second time, I’m here to show them that it was not a fluke. We’re here to f--king get it. I ain’t playing no games. The way I see it, he owes me a gold medal, and this time I’m getting both of them.” 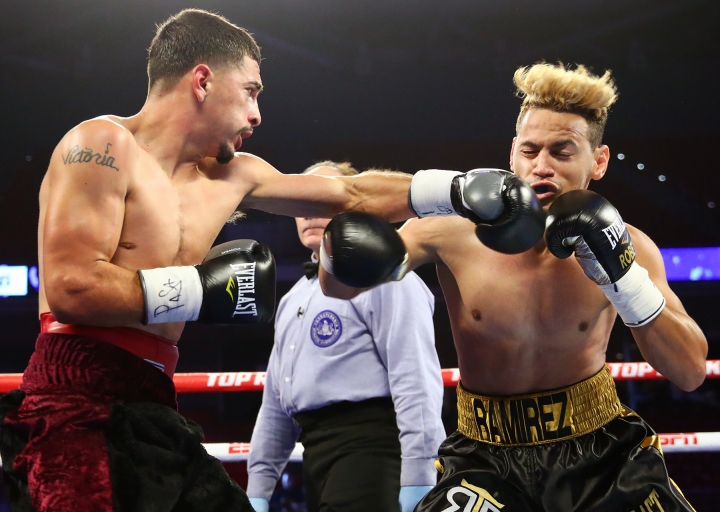 The 23-year-old Gonzales (5-2-2, 2 KOs) has not fought in the nearly 11 months since he upset Ramirez at Temple University’s Liacouras Center. Bob Arum’s promotional company attempted to put together their rematch twice before the COVID-19 pandemic temporarily shut down the boxing business in the middle of March, but they couldn’t come to an agreement with Gonzales on his purse.

Gonzales is a single father of two young boys, 3-year-old Yovani and 2-year-old Nathaniel, who works a full-time job for a landscaping company and trains after work. He understands that beating Ramirez again could completely change the course of his career.

“I just think about it like this – I want everything he’s got,” Gonzales said. “I want all of it. Like, I really do. I know he has a lot on the line right now. And I know if I beat his ass again, they’re gonna drop his ass. They’re not gonna be interested in Ramirez anymore. They’re gonna be looking at me. That’s what I want. I want all eyes on me. I want Denver to know that I’m up next. I want the whole boxing scene to know who Adan Gonzales is, and I wanna make my mark in this world.”

Gonzales has noticed improvement in Ramirez during the three fights he has won since Gonzales beat him on two of three scorecards (40-35, 39-36, 37-38). The Cuban southpaw won each of those three bouts by knockout, but Gonzales feels those opponents weren’t nearly as capable as him.

“Not to shut him down completely – he’s a decent fighter. And if he made some improvements, he could definitely beat somebody. But I’m Adan Gonzales, bro. I’ve been doing this since I was 6 years old. This has been a lifelong dream of mine, and now it’s in my grasp. I’m gonna grab a hold of that sh-t and I’m not gonna let it go.”

Ramirez, who hired respected Cuban trainer Ismael Salas after Gonzales beat him, will fight for the second time in three weeks. He needed just 54 seconds to drop the Dominican Republic’s Yeuri Andujar (5-4, 3 KOs) twice and stopped him in the first round of their June 9 bout at MGM Grand Conference Center.

That victory was part of the Shakur Stevenson-Felix Caraballo undercard. Stevenson (14-0, 8 KOs), whom Ramirez edged in the bantamweight gold-medal match at the 2016 Summer Olympics in Rio de Janeiro, knocked out Puerto Rico’s Caraballo (13-2-2, 9 KOs) with a body shot in the sixth round of the main event.

“[Ramirez] lost against Shakur Stevenson, if you ask me,” Gonzales said. “There’s really nothing special about him. Ramirez is just another man, nobody special. And I’m here to expose that.”

[QUOTE=Get em up;20639334]A rematch clause for a pro debut? Is this really a thing?[/QUOTE]That's what I'm saying it's crazy how they can put that and then proceed to stall the other guys career while letting Ramirez build himself up politics…

A rematch clause for a pro debut? Is this really a thing?