Before his most recent fight last November, Adam Lopez said 2020 was going to be the year when all eyes would be on him.

He was right, but what he couldn’t have predicted is that the reason everyone is looking at the featherweight up and comer now is that he is going to be one of the first boxers back in the ring in the United States, when he faces Luis Coria for the vacant NABF title on June 11 in Las Vegas.

In the middle of the COVID-19 pandemic.

“I did not expect that,” he said. “No one saw this pandemic coming at all.”

It makes you wonder how the 24-year-old from Van Nuys keeps everything together before a pivotal fight in his career, not just with the pandemic, but the protests taking place around the country following the death of George Floyd last month. It’s a different world out there, and he knows it.

“It's tough,” Lopez said. “There's a lot of stuff going on in the world and you just gotta have faith, trust in what you believe in and pray that hopefully it calms down and everything goes back to normal and the world becomes a better place.”

We may never see what we’ve considered “normal” ever again, but that’s where young men like Lopez thrive, because if there’s any sport that doesn’t fit into the bracket of normal, it’s boxing.

Case in point, that most recent fight in Las Vegas. When I spoke to him, he was scheduled to face Coria – yes, the same Coria – on a card headlined by a bout between Oscar Valdez and Andres Gutierrez. Gutierrez missed weight by a mile, coming in at 141 pounds for a junior lightweight fight.

Lopez got a call, asking him if he would be willing to step up on a day’s notice. It was the opportunity of a lifetime, but the risk of a lifetime, as well. He took the fight.

“Opportunity's gonna knock on the door and you gotta be ready for it, whether you think you're not or you are,” he said. “You gotta just trust yourself and you can't think about all the negative stuff sometimes. You gotta take in some of the positives and really believe in yourself. I was getting ready for the fight already, I didn't have the best camp, but it was a fight that I always saw myself getting. I didn't expect it to happen like that and something in me just told me to take it. There's something in my blood where I can't turn down a fight like that. If the opportunity comes, I'm gonna take it.”

His late father, respected contender Hector Lopez Sr., would have been proud. And though Lopez suffered a controversial seventh-round stoppage at the hands of the unbeaten Valdez, he nearly pulled off the upset, as he dropped his foe in the second round and was up on one judge’s scorecard and just a point behind on another when the fight was halted. And with ace publicist Rachel Charles leading the way, more media outlets were talking about Lopez and his performance than that of Valdez.

And why not? It was a testament to the power of taking chances, of rolling the dice and daring to be great. If you fail, well, it’s not really a failure if you tried, and fans and the media that didn’t know Lopez before certainly knew him as November 30 turned to December 1, and they wanted to see him in action again. 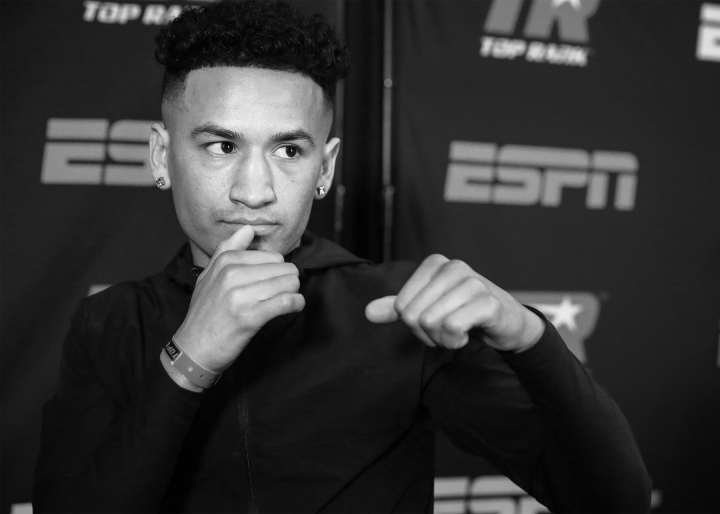 That next bout was scheduled for April 11 against Coria, but then COVID-19 arrived and put the boxing world on hold. So yes, June 11 will be third time Lopez and Coria are scheduled to fight.

“I think if it doesn't happen this time, it might be time to move on,” Lopez laughs. “But it looks like all the ducks are lining up and I think this fight is gonna go through finally, and we'll be ready to rumble June 11.”

Lopez has actually been ready to rumble for a while now. After boxing got shut down, the Glendale native broke camp and took a couple weeks to rest his body, but then he was right back at it.

“I knew eventually the fights were gonna come back and I had to be in decent shape to where if they gave me four weeks for a fight, I've gotta be ready for four weeks,” he said. “And we had been back training a week and a half, two weeks and they gave us the phone call and said can you be ready in a month. I said this is exactly what I prepared for. Yes, I can be ready. Let's make it happen.”

And here we are. June 11, Las Vegas, ESPN, and no crowd. For the Top Rank fighter, all that maters is that he has a date and a location. Everything else is just window dressing.

“I know people are dying to see something but, in my mind, I don't really think too much about it,” he said. “I try not to focus on who's watching or that there will be more viewers; I try to just focus on my fight. Look at the last fight; I wasn't expecting to be put in the main event the day before, but I took it for what it was. To me, it was just another fight, I prepared for it, and it's the same thing with this. I'm preparing for my fight, I'm doing what I gotta do, crossing my Ts, dotting my Is and going there to perform and show the world what I got.”

What he’s got is another opportunity, this one with the notice he needs to put on his best performance. Fighting with the entire boxing community watching, Lopez could walk away with an NABF belt that will put him in the 126-pound top 15, and from there, it’s all good stuff, and he knows it.

“Now that the world got a little bit of a taste and they see what I could do, they know that I'm with that top level of fighters and I can give anybody a tough fight and definitely beat any champion out there,” Lopez said. “Now it's just me getting ranked, getting more eyes on me, building a bigger fan base, and we can start making these big fights and these big money fights for the fans. I know everyone wants to see tough fights, so I'm training hard, I'm perfecting my craft and I'm ready and I want everybody else to be ready, too, because the fights are gonna start getting made very soon.”

“Every year,” he laughs.

He got screwed against valdez

However the fight goes good bad middle of the road I do not know. But I sure am glad to hear a fighter talking about a fight that IS going to happen. Not somebody going on and on about a…

You guys should get creative with the titles, its always that a certain fighter “smiles” or “vows” to do something smh