Adam Lopez: In 2020, I'll Definitely Have More Eyes on Me

She almost won. Adam Lopez’ mother Norma didn’t want her sons to follow in the fighting footsteps of their father, Olympic silver medalist and pro lightweight and junior welterweight contender Hector Lopez, and while Adam split his time between the ring and the football gridiron, as the starting quarterback for his high school team, it appeared that he was heading in a different sporting direction.

This direction was one that could earn him a scholarship and perhaps a college education, as opposed to a degree from the school of hard knocks.

But then a week before the start of the football season, the sophomore QB put down his pads and helmet and walked away.

“When it was football season I was not boxing and when I was boxing I wasn’t playing football, so it was back and forth,” Lopez recalled. “But one year I was going into my sophomore year, I was the starting quarterback, the season was about to start and we had a week break, so I went to Arizona for an amateur fight. Something about the drive to Arizona and the weigh-ins and me winning and coming home, it really sparked something and I didn’t show up to football practice again. They had to find a new quarterback.”

Lopez even left school, getting homeschooled for the rest of the year, and as far as his athletic life was concerned, boxing now had his heart. And he never looked back.

The 23-year-old Lopez is in Florida as he tells the story, training with Buddy McGirt before the two head out west for a Saturday bout in Las Vegas against Luis Coria. It’s his third bout of the year, his second with the NABF junior featherweight title on the line, and should he add another victory to his 13-1 (6 KOs) record, 2020 is shaping up to be a big one for him.

“2020 is definitely gonna be the year where I’ll have more eyes on me, and I think I’ll get a lot more recognition and my name will get out there,” he said. “I’ve got a good team behind me, I’m ready for it and I’ve been putting the work in.” 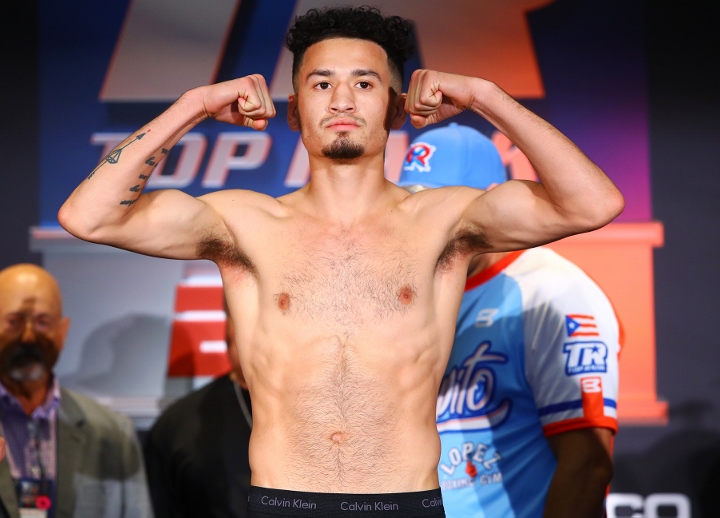 You could say it was written in the stars for him to be here as the son of Lopez, a solid contender who fought the likes of Kostya Tszyu, Randall Bailey and Miguel Angel Gonzalez, compiling a 41-7-1 record over the course of a 15-year career. And before he passed away at 44 in 2011, he had introduced Adam to the sweet science while warning him of the not so sweet parts of the sport.

“When I was three or four, my dad used to take me to the gym with him all the time,” Lopez recalled. “So me growing up, seeing him fight, he didn’t even have to ask me. I said it. I wanted to do it just because I had seen him doing it. But he said if you’re gonna do it, you have to do it the right way because this is not a game. It’s very tough and very hard to make it. So he always put it in my head that it’s very tough.”

Norma saw first-hand how tough it was, and she was going to do anything in her power to keep Adam and Hector Jr. (also a current pro) away from the ring.

“When I was younger, my mom put me in every single sport and hoped that I didn’t want to box,” he said. “I fell in love with basketball and football and I was very passionate with them, but when I was ten years old I found people at my school that were doing boxing too and I started hanging out with them.”

Soon he found his way to the gym and his mother and uncle reluctantly took him to the gym every Saturday.

“She was hoping it would get out of my system, but it kept me coming back for more.”

By the time football was out of the picture, Norma had to admit that she had lost her son to the ring. That doesn’t mean she stays away on fight night, though.

“She’s there, screaming and loud,” laughs Lopez. “She’s nervous, she can’t eat the day of the fight, but she raised me and my brother, so we’re her world.”

And while the Lopez boys may have picked up their toughness from dad, it’s mom who may be the truest fighter of the family, as she raised her sons while Hector Sr. fought his demons outside the ring, leading to stints in prison that kept him away from his boys. That reality isn’t lost on Adam.

“I gotta give all the credit to my mom,” he said when asked what kept him from following the same path his father traveled outside the ring. “She raised us the right way and she did it on her own, which was very hard for her. Her and my grandma, they made sure we were good. We didn’t need nothing when we were growing up, we always had food on the table, clothes on our back and she was very strict on us growing up. My dad growing up, he kind of raised himself. His mom worked two jobs and it was four brothers from Mexico City, they didn’t speak no English and they were just trying to find food and go to school. They had no direction and that’s how they kind of fell into the wrong side and bad stuff outside of the ring. But I have to give the credit to my mom, she made it happen.”

There is plenty of Hector Sr. in Adam Lopez, though. Just look at his record. After opening his career with a trio of wins over the usual suspects talented rookies fight, he has yet to fight another fighter with a losing record. That includes bouts against seven unbeaten foes, a schedule not usually associated with the rise of a prospect.

“I didn’t really have any promotion or marketing behind me,” he said. “So I took these fights knowing I was the B-side and I was coming in as an opponent. But I knew I was gonna win the fights, I trusted in my abilities and I took these fights hoping I would make some noise coming up – that they see the young prospect taking on all these undefeated fighters. But nowadays, everybody’s got a padded record and people will soon realize when they look at my record that I took on anybody and everybody – it didn’t matter when, where or who it was.”

That approach could have backfired on the Glendale native, but with fighting in his DNA, he knew no other way to make things happen.

“I was just trying to prove myself and make a name,” Lopez said. “I was really hungry.”

He’s still hungry, but now with Sheer Sports Management, he’s hoping to get the right fights, not just any fight. Because now, he’s in striking range of big things, and when those right fights make their appearance, his tough fistic upbringing will certainly pay off.

“There’s always going to be a part of my head where I know I’ve been in this situation before where I wasn’t supposed to win the fight or I’m fighting against an undefeated kid,” he said. “A lot of these undefeated fighters, they don’t have tough fights until they get a title eliminator or a title shot. So, for them, it’s their first real fight and, for me, I’ve been there and I came out with my hand raised. So in my head I know I’ve got a little bit more experience from that, so I am happy I’ve been through what I’ve been through.”

And if you’re wondering, no, Adam Lopez has no regrets about leaving football behind.