Undefeated Polish heavyweight contender Adam Kownacki will headline a show from the Barclays Center on March 7 on Fox against an opponent still to be determined, PBC announced on its flagship program “Inside PBC Boxing.”

The return marks the first time Kownacki (20-0, 15 KOs) will return to the ring since unanimously decisioning Chris Arreola in an all-out slugfest last August that set a new heavyweight record with 667 combined punches landed in a fight. It also catapulted the heavyweight record for combined punches thrown with 2,172. The previous record was 1,730, set by Ike Ibeabuchi and David Tua in 1997, per CompuBox.

The development also means that the Brooklyn-based Kownacki, a PBC fighter, won’t co-headline the Deontay Wilder versus Tyson Fury card on Feb. 23. 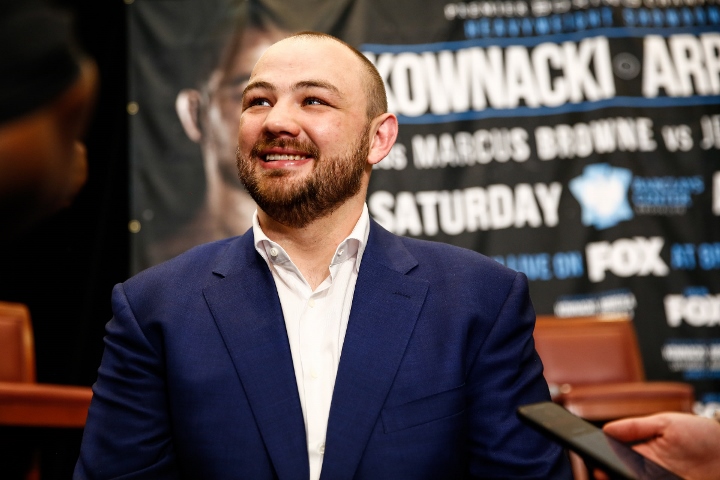 Kownacki was in attendance as an interested observer for Wilder’s last fight against Luis Ortiz in Las Vegas in November, and PBC has one slot on the three-fight, pay-per-view undercard to stage its own fight.

The 30-year-old Kownacki, who has a 75 percent career KO ratio, is being built as a brand in Brooklyn and the east coast, where his following continues to grow. The March 7 bout will be his tenth fight at the Barclays Center. Out of his last 12 bouts, only two will have been held outside of the venue.

[QUOTE=j.razor;20298605]I heard this morning eddie wants dazn to start charging 50 a month :lol1: danz must be hurting.[/QUOTE] Yeah I saw that interview....but hey, everyone in the USA is supposed to get dazn because the British demand it....

Wonder whos on the shortlist of opponents for March. With the money hes getting it should be someone notable.

Will have to be someone in the top 15 of the IBF? He's going to be the mandatory for the winner of Joshua/Pulev soon enough or will be put in a final eliminator.

[QUOTE=Oldskoolg;20297433]Nothing like a PBC announcement to bring out the Hearn KKKlan[/QUOTE] I heard this morning eddie wants dazn to start charging 50 a month :lol1: danz must be hurting.

[QUOTE=daggum;20297403]kauffman got ko'd in his last fight too so i dont understand. i suppose that was a year ago so he's all good now? [B]how long does ortiz need to recover?[/B][/QUOTE] Ask fury :rofl: