NEW YORK – Adam Kownacki hit Chris Arreola as often and hard as he could Saturday night, but Kownacki couldn’t knock out the huge underdog.

Kownacki did more than enough, though, to beat the veteran heavyweight in their entertaining, 12-round main event at Barclays Center in Brooklyn. Judges Lou Moret (117-111), Kevin Morgan (117-111) and Don Trella (118-110) scored Kownacki a wide winner of a fight FOX televised.

Kownacki’s win drew a respectable crowd of 8,790 to Barclays Center in Brooklyn, which was full of Kownacki’s loud, proud Polish supporters.

The 30-year-old Kownacki (20-0, 15 KOs), born in Poland and raised in Brooklyn, headlined a card at his hometown arena for the first time. The 6-feet-3, 266-pound brawler and Arreola consistently delivered the type of action to which Kownacki’s fans have become accustomed.

“I thought it was a good fight, close, but I knew I pulled it out,” Kowancki told FOX’s Heidi Androl during his post-fight interview. “I landed a lot of shots and that was enough to win. That’s all that matters.

“Chris is an Aztec warrior. He’s a great fighter. I knew it would be a tough fight and I prepared for it. The CompuBox numbers prove it was a great fight.”

The 6-feet-4, 244-pound Arreola (38-6-1, 33 KOs, 2 NC), of Riverside, California, displayed his trademark toughness throughout their bout. He just wasn’t accurate enough or effective enough defensively to defeat the ever-relentless Kownacki, who went 12 rounds for the first time in his nine-year pro career. 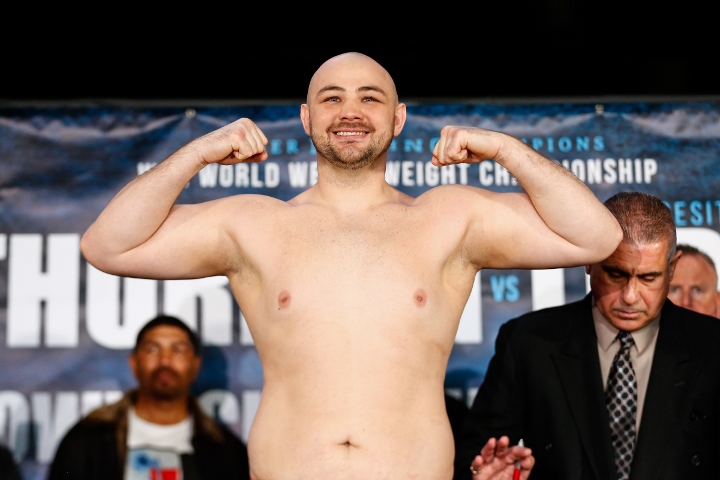 The 38-year-old Arreola repeatedly stated before their fight that he would retire if he lost. He told Androl that he’ll have to discuss his future with his family and handlers before making a decision.

“You know what? It’s a big decision,” Arreola said. “I’ll have to talk to my family, [adviser] Al [Haymon], and [trainer] Joe [Goossen]. But I feel like it’s about time. And I gave it my all this fight. I really let it all hang out.”

Arreola also fought for more than half the fight with what he suspected was a fractured left hand.

“After breaking my hand, I kept fighting because I believed I could win,” Arreola said. “Adam is relentless. He just keeps coming. I know I got him with some good punches, and he got me with some good ones. I was more than ready to go all 12, but Adam came in and won the fight.”

Arreola, a Riverside, California, native, has had three heavyweight world title shots, but lost all three fights. Vitali Klitschko and Deontay Wilder stopped him, and Arreola dropped a unanimous decision to Bermane Stiverne in between those TKO losses.

The courageous contender also has participated in other grueling fights, which could cause him to walk away from the sport.

Kownacki was by far the toughest of Arreola’s three opponents since he resumed his career eight months ago. Before beating journeyman Maurenzo Smith by technical knockout December 1 at Staples Center in Los Angeles, Arreola hadn’t fought since Wilder, the WBC champion, stopped him following eight one-sided rounds in July 2016 at Legacy Arena in Birmingham, Alabama.

In his previous fight, Arreola stopped Jean Pierre Augustin (17-1-1, 12 KOs), of Providence, Rhode Island, in the third round March 16 at AT&T Stadium in Arlington, Texas.

Kownacki and Arreola hugged before the 12th round began Saturday night. Then they proceeded to wail away at one another during those final three minutes.

Arreola cracked Kownacki with a right hand early in the 12th, but Kownacki took it well.

They traded power punches from close distances for the rest of their tremendous action fight. The crowd roared in approval once the final bell sounded.

Arreola moved Kownacki backward with a straight right hand about 50 seconds into the 11th round. A ringside doctor looked at Arreola before the 11th round began, but he had one of his better rounds in the 11th and showed why it shouldn’t have been stopped.

Arreola complained Kownacki hit him about 40 seconds into the ninth round and backed off. Schiavone didn’t warn Kownacki, who press forward and backed Arreola into a neutral corner.

Kownacki and Arreola landed right hands to his opponent’s head later in the ninth, but neither fighter appeared affected.

Kownacki was the busier, more accurate fighter throughout the eighth round, yet he couldn’t keep Arreola from moving forward. Arreola caught Kownacki with an overhand right early in the seventh round.

Kownacki and Arreola traded clean right hands as they neared the one-minute mark of the sixth round. They enthusiastically exchanged again just before the sixth round ended.

Another Arreola right hand stopped Kownacki in his tracks with just over 10 seconds remaining in the fifth.

The rapid pace of the fight slowed at one point in the fourth round, but not for long. Arreola backed Kownacki into the ropes and landed a left to his body, but Kownacki took it well and kept pressing forward.

Arreola landed two straight right hands to Kownacki’s head late in the fourth. Kownacki didn’t budge, but the favored fighter didn’t have as much snap on his punches as the fourth round came to a close as he had in prior rounds.

Kownacki seemed to affect Arreola with more body and head shots later in the third. Arreola stood his ground, however, and hammered away at Kownacki’s body.

Kownacki connected with hard shots at the start of the second round. Arreola moved backward, but shook his head, as if to tell Kownacki he wasn’t affecting him.

Arreola and Kownacki traded hard shots from the inside in the final minute of the second round. A right uppercut by Kownacki snapped back Arreola’s head with about 25 seconds to go in that round.

Kownacki, motivated by his screaming fans, went right after Arreola as soon as the opening bell sounded.

He landed a hard right hand to the side of Arreola’s head several seconds into the fight. As usual, Kownacki continued applying pressure on his older opponent throughout the rest of the first round.

Arreola connected with a right hand a stiff jab with just over a minute to go in the first, though.

Yeah, gets hit too much. That works against a feather fister like Fury, but not a bomber like Wilder.

Regardless of punch stats Kownaski was exposed by a limited and fadded fighter how fought his ass off. IDK if it was fixed or? Shocked at how slow and easy to hit Adam was in this fight looked 10 time…