NEW YORK – Charles Martin made Adam Kownacki earn every bit of the most noteworthy win of his career Saturday night.

The Polish-born contender beat Martin by unanimous decision in their 10-round heavyweight fight, but Martin earned some measure of redemption nearly 2½ years after his poor performance against Anthony Joshua. All three judges – Carlos Ortiz, Joseph Pasquale and John Stewart – scored their fan-friendly slugfest the same way, 96-94, for the undefeated Kownacki.

The Brooklyn resident drilled Martin with plenty of hard right hands, but also ate numerous lefts from the former IBF heavyweight champion in the first of three fights Showtime televised from Barclays Center in Brooklyn. Both boxers displayed iron chins by taking countless punishing punches and remaining on their feet throughout the bout. 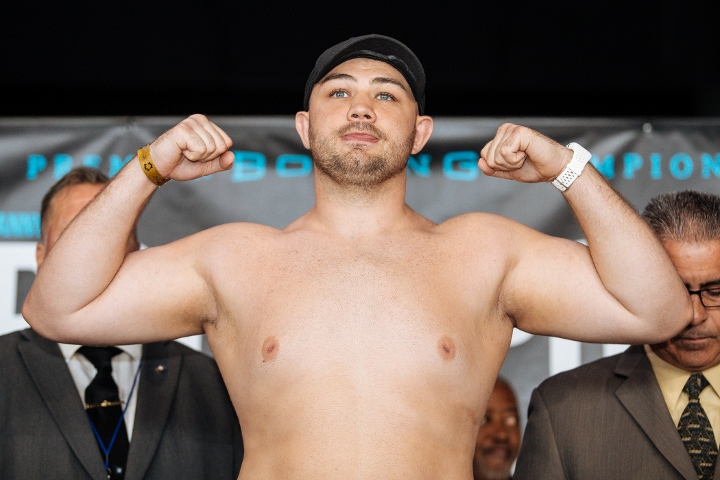 The 6-feet-3, 263-pound Kownacki went for the knockout at the start of the 10th round, but a resilient Martin took Kownacki’s best shots and continued coming back with left hands. The 6-feet-5, 246-pound Martin came back to crack Kownacki with several hard left hands that Kownacki somehow took well.

The ninth round was an indication of what was to come during that riveting 10th round, as Kownacki and Martin each connected with power punches to the head and body.

Martin cracked Kownacki with a hard left hand toward the end of the eighth round. Kownacki had success earlier in the eighth with his overhand right and body shots.

Kownacki and Martin began the seventh round with an entertaining exchange in which both boxers landed hard shots. Martin also unloaded a huge overhand left that landed in the middle of Kownacki’s face with about 1:15 to go in the seventh.

Martin drilled Kownacki with an overhand left 30 seconds into the sixth round. Kownacki and Martin each landed huge shots just after the midway point of the sixth, but neither fighter was hurt.

Kownacki cracked Martin with a right hand when there were about 30 seconds to go in the fifth. Martin took it well and fired back with a straight left hand that landed flush.

Kownacki connected with several right hands that made Martin hold him about 1:15 into the fourth round. They traded shots to the head and body over the final minute of the fourth.

Martin began tying up Kownacki in the third round for the first time in the fight. That at least slowed Kownacki’s momentum temporarily.

Martin backed Kownacki into the ropes late in the third. He landed a couple body shots that kept Kownacki from throwing punches for several seconds.

By the midway point of the second round, Kownacki was landing punches in combination and kept Martin moving backward. Martin tried to keep Kownacki off him, but he wasn’t committing enough to his shots to land a damaging punch.

Kownacki attacked Martin as soon as the opening bell rang. He landed two straight right hands within the first minute of the first round and kept Martin on his back foot.

Martin seemed more uncomfortable than hurt from those shots. He couldn’t land anything, though, that made Kownacki think twice about plowing forward.

Kownacki ruined Martin’s attempt to thrust himself back in the mix for a heavyweight title shot. Before facing Kownacki, Martin had knocked out journeymen in his only two fights after to losing his IBF heavyweight title to Joshua in April 2016.

England’s Joshua dropped Martin twice with right hands in the second round of their title fight at O2 Arena in London.

Martin seemed more surprised than hurt, yet took too much time to get up from the second knockdown. That caused referee JeanPierre Van Imschoot to stop the action at 1:32 of the second round.

The St. Louis native has endured an avalanche of criticism since his poor performance against Joshua.

Great fight & I had it 96-94 Kownacki but I tell you if this fight was scheduled for 12 there may have been a different outcome. Both guys put on a hell of a fight. Reminded me of the Takam/Mike…

It is pretty obvious who Showtime is backing as the commentator doesn't acknowledge any of Martin's work & in between rounds they only go to Kownacki's corner. I get it that the crowd is a lot of Polish but man…

This clown has not said anything positive about Martin. Martin lands a great straight left that stops Kownacki in his tracks then hits him with a nice sweeping left & he said nothing about either punch & just goes on…

I'm catching up on all the recent fights I couldn't watch live. THe commentating is terrible for this fight on Showtime. The guy is giving Martin absolutely no credit for anything he does. At one point in the 3rd round…

I thought his head was going to come off in the 10th round. What an amazing fight.