The Polish heavyweight contender is sure Martin could’ve gotten up and continued during the second round against Anthony Joshua. A lack of desire, according to Kownacki, is what made Martin take too much time to reach his feet following a second knockdown and lose that IBF heavyweight title bout by knockout.

“I think he has no heart,” Kownacki told BoxingScene.com on Thursday before a press conference at Dream Hotel Downtown. “I think it’s a question of heart. And that’s what I’m gonna take away on Saturday, his heart, and make him fold.” 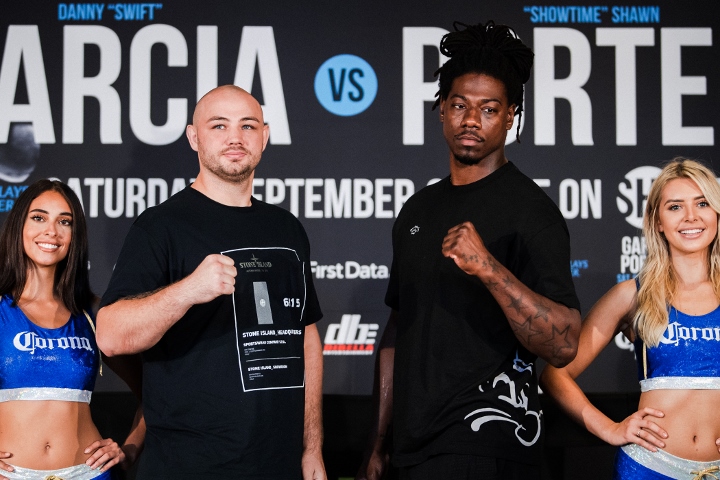 If Kownacki can beat Martin in their 10-round fight Saturday night at Barclays Center, it’ll move the Brooklyn resident one step closer toward a title shot. Meanwhile, Martin intends to redeem himself against the toughest of his three opponents since Joshua took the IBF championship from him in April 2016 at O2 Arena in London.

“I know he trained hard,” Kownacki said. “He looks to be in shape, but I’m ready, too, man. I don’t care about him. It’s all about me. It’s my coming-out party and I’m gonna do everything I could to get him out of there early.”

The 6-feet-5, 250-pound Martin should be the most powerful puncher Kownacki (17-0, 14 KOs) will have encountered in his nine-year pro career. Kownacki, 29, isn’t exactly impressed with Martin’s resume, though.

“Personally, I think he’s scared,” Kownacki said. “If you look at his record, he hasn’t really fought nobody except Glazkov and Joshua. We know Glazkov only went three rounds with the injury and I don’t think you can really call the Anthony Joshua fight a fight, because he just got hit with a straight right hand and went down, the second time, too, and that was all she wrote. So I think I’ve fought a harder level of competition, definitely, and I’ll prove that on Saturday.”

The 32-year-old Martin (25-1-1, 23 KOs) won the then-vacant IBF title when he stopped an injured Vyacheslav Glazkov in the third round of their January 2016 bout at Barclays Center. Ukraine’s Glazkov (21-1-1, 13 KOs) suffered a devastating right knee injury in the third round that night and still hasn’t returned to boxing.

“Even though Charles Martin had the second-shortest [title reign], his name is down in the history books as a heavyweight champion,” Kownacki said. “Not a lot of people can say that. That’s my goal, too, and I’m ready to take him out of there Saturday and put myself in line for a title shot.”

Philadelphia’s Danny Garcia (34-1, 20 KOs) and Las Vegas’ Shawn Porter (28-2-1, 17 KOs) are scheduled to fight for the vacant WBC welterweight title in the 12-round main event. This tripleheader also will include a 12-round WBC welterweight eliminator that’ll pit Cuba’s Yordenis Ugas (22-3, 11 KOs) against Argentina’s Cesar Barrionuevo (34-3-2, 24 KOs).

Was a great fight. Both men came prepared for a battle...deserved win for Kownacki but Martin def showed he has some balls

[QUOTE=Muz;19078409]Martin typifies today's African American fighter, and Kownacki understands that culture well living among them in a Brooklyn. He sees a lazy entitled coward in Martin, and he has no respect for the man. Wilder is similar to Martin except…

[QUOTE=Muz;19089328]Well he lost so now what lol? Back to dealing drugs?[/QUOTE] At least he showed some heart cause he took some big shots but didn't give up. However, Martin has no future in the HW division, that's for sure.

[QUOTE=VatoMulatto;19078665]Kownacki is sloppy as hell, comes straight forward and lack defence. Even though Martin isn't a top level boxer, Martin is still the better boxer, taller, naturally bigger and stronger. He's also a solid counter puncher and he has some…

Kownacki is sloppy as hell, comes straight forward and lack defence. Even though Martin isn't a top level boxer, Martin is still the better boxer, taller, naturally bigger and stronger. He's also a solid counter puncher and he has some…