Nova, who is currently ranked #10 in the WBA's super featherweight world rankings, put on a near perfect performance in front of a packed crowd of 'Super' supporters. After a tentative first round from both fighters, Nova found his range midway through the second and exploded on Lozano. Firing off a series of fast and powerful combinations to both the body and head, Nova dropped the only twice beaten, Lozano forcing the referee to call a halt to the contest at 2:26 into the second round.

"I'm ready for anybody. Top 10. Top 2. The Champ. Anybody can get it. I'm the best kept secret in boxing. It's time to make my national television debut and let the world know who Abraham 'Super' Nova is.", said the outgoing and confident young prospect who sports a bleach blonde beard and has one of the most creative ring walks in all of boxing.

Nova's promoter, Murphys Boxing founder, Ken Casey was thrilled with Nova's performance and is anxious to get the 25 year old in a title eliminator with another Top 10 ranked fighter.

"He's got the whole package. The look. The entrance. The talent. The performance. The fan base. He's accurate and sharp but he also punches with bad intentions. You can just tell he's on a different level. He's a world class fighter." 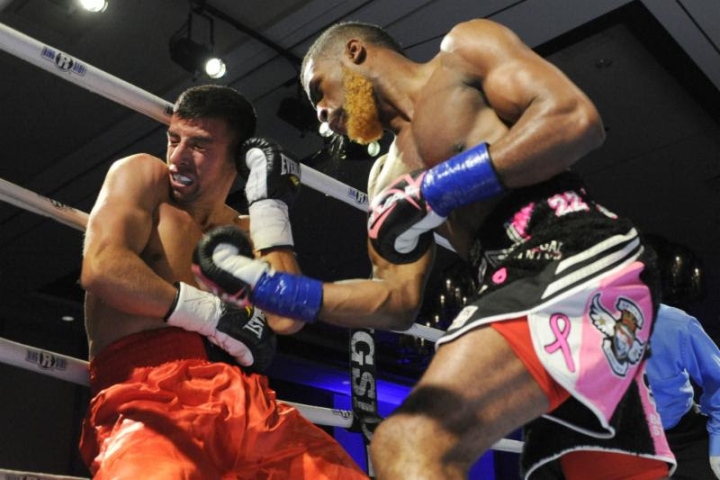 As for Nova's immediate future, Casey confirmed he will be making his national TV debut in his next fight.

"We're finalizing a nationally televised fight for Abraham this summer against another Top 10 fighter that we will be announcing soon. Then I'd like to see him fight for the mandatory by the end of the year. We think he can win the big one, so it's time to get him the opportunity. We're incredibly excited about Nova's future. He's ready to be a star."

The co-main event saw Murphys Boxing’s own William Foster III (10-0, 7 KOs) absolutely dominate and drop Argentina’s Ramon Esperanza (22-16-1, 11 KOs) multiple times before the referee called a stop to the fight at 2:39 into the fourth round of a scheduled 8 round bout. Foster, the current Jr. NABF Super Featherweight Champion and younger brother of NABA Light Heavyweight Champion, Charles Foster, looked sensational, using a relentless body attack to overwhelm his more experienced opponent from the opening bell. The buzz on Foster continues to build in New England and he brought a vocal crowd from his hometown of nearby Hartford, Connecticut.

Local Springfield fighter, Derek Whitley Jr. (5-1-1) won a unanimous decision over Philadelphia’s Bryan Goldsby (5-11) in a 4 round welterweight fight. Goldsby had several moments throughout the fight but the MMA veteran didn’t stay busy enough against the counter-punching southpaw who won with decisions of 39-27 and 40-36 twice.

2x Olympian from Ecuador, Carlos Gongora (16-0, 12 KOs) won a hard-fought unanimous decision over a game and rugged veteran, Damien Ezequiel Bonelli (23-6, 20 KOs) in a 10 round middleweight fight with scores of 99-91 and 98-92 twice. Gongora, who is signed with Murphys Boxing, is the current WBC South American Middleweight Champion.

Springfield’s own Anthony Velazquez (6-0, 6 KOs) continued his impressive KO streak against an outgunned Bruno Diaz (0-6) dropping him twice in less than a minute into the first round of a 4 round welterweight bout before the referee waved off the contest at 1:32 for a 1st round TKO.

The hard-hitting Ray Jay Bermudez (7-0, 5 KOs) who hails from nearby Albany, New York unleashed a barrage of hard hooks dropping a helpless Patrick Leal (0-6) three times for a first round TKO at 1:35 seconds into a scheduled 4 round welterweight bout.

Boston based amateur standout, James Perella (3-0, 3 KOs) made easy work of Paulo DeSouza (0-14) dropping him twice in the first round before the referee called a stoppage 16 seconds into the second round of a scheduled 4 round welterweight fight after DeSouza was badly hurt by a straight right. It was Perella's third fight in his first two months as a professional.