Abel Sanchez: Refocused Joshua Will Beat Ruiz In Their Rematch

Ruiz’s former trainer was in his corner when Ruiz lost a majority decision to Joseph Parker in their 12-round fight for the then-vacant WBO heavyweight title in December 2016. Even though Sanchez doesn’t train Ruiz anymore, he knows how much hard work it took for Ruiz to get back into position to knock off Anthony Joshua on June 1 at Madison Square Garden.

Thus, Sanchez has enjoyed watching all the attention his fellow Mexican-American has received since the newly crowned champion dropped Joshua four times and stopped him in the seventh round to pull off one of the biggest upsets in boxing history. 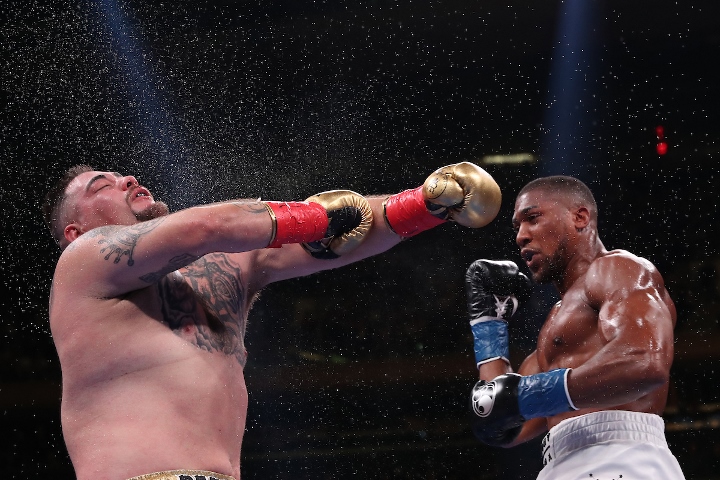 Sanchez still doesn’t expect Ruiz (33-1, 22 KOs) to have a long championship reign. He predicted a refocused Joshua (22-1, 21 KOs) will win their rematch and regain his IBF, IBO, WBA and WBO titles when they square off in October or November somewhere in the United Kingdom.

“[Joshua] beats him in a rematch,” Sanchez told BoxingScene.com. “And the reason I say that is because we’re taking away all the accomplishments before the Ruiz fight. Before the Ruiz fight, this guy was unbeatable. Wilder couldn’t beat him. They were talking about $50 million. Fury couldn’t beat him. He gets beat by Andy, and now he’s nothing. He’s crap. That’s not true. It doesn’t work that way, not to me, anyway. He’s a gold medalist, who has credentials, and there’s a reason why he’s there. And Andy had a great night, and Andy did the things that were necessary that night, and [new trainer] Manny Robles had a great game plan. That doesn’t mean that Joshua has nothing.”

Sanchez feels Joshua’s shocking setback will force him to get back to concentrating primarily on boxing. The trappings of celebrity were huge factors, according to Sanchez, in Joshua losing to Ruiz.

“Anthony, unfortunately, became a star in the UK,” Sanchez said. “That became the priority, being a star, and boxing became second. Now he has to go back to boxing being first and being a star second. He’s everything in the UK. I saw a picture of him on his own plane, his own jet. Sometimes you have to realize what pays the bills. What pays the bills is him climbing through the ropes and being ready for the guy across the ring from him that wants the true hell.”

[QUOTE=megas30;19842863]I disagree with the Mayweather gym thing. The Mayweather Gym is no different from Garcia's gym where they are going to support their gym fighter. Notice most black boxers do not support Mayweather, especially the older heads?[/QUOTE] Backing the gym…

Abel just saying what we already know, fat Andy Ruiz Jr will get destroyed in the rematch. Eddie Hearn should have delayed the fight like AJ father instructed him to do and this little façade would never have happened. Fully…

[QUOTE=saopaulo;19841774]Ruiz will tip the scales at 400 lbs completely out of shape for the rematch like buster Douglas did vs holyfield. Ruiz will come in wearing a snickers robe, kit kat trunks, hershey bar ring boots and mars bars boxing…

[QUOTE=4truth;19841857]Joshua needs to do more than “refocus”. Joshua has flaws that need to be addressed, his biggest flaw is his inability to fight at a sustainable pace. Either he needs to increase his aerobic level (which may not be so…

For me, as well as Ruiz fought in the 1st fight up until AJ's round from darkness there wasn't anything in it. The first was even and AJ actually won the second. When AJ put Ruiz down, he shouldn't have…