NASHVILLE—As it turned out, Abel Ramos was able and ready for that spaghetti.

Ramos twice floored Perrella inside the final minute of the fight, the latter prompting a stoppage at of round ten.

“The fight ain’t ever over until it’s over,” Ramos told Fox Sports’ Heidi Androl after the dramatic win.

The pair of welterweights were tasked with providing the fight of the night, or so suggested the pre-fight scouting report. Both fighters promised to deliver, but were understandably cautious in the opening round. Perrella worked behind a long right jab out of his southpaw stance while Ramos looked to counter with overhand rights. Perrella settled down late in the frame, connecting with a pair of straight lefts and immediately sliding back to avoid return fire. 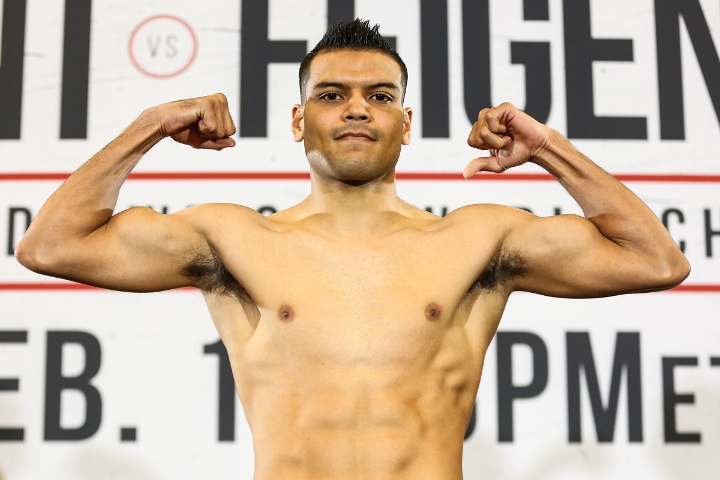 The same pattern held true in round two, with Perrella boxing with confidence while Ramos spent much of the frame looking for an opening which never presented itself. The veteran trialhorse from Casa Grande, Arizona managed to close the gap in round three, though only enjoying middling success.

Perrella picked up the pace in round four, landing in combination and coming forward with regularity after offering more movement in previous rounds. A straight left hand by the Ft. Myers, Florida-based southpaw briefly caused Ramos to do a double step, though proving to be a singular moment as Perrella was unable to capitalize.

Ramos pressed the action in round five, scoring with a right hand on the inside. Perrella returned to his jab, shooting it with conviction and offering more subtle movement in the round. Ramos quickly adjusted, getting in close and connecting with a right upstairs, followed by a body shot to close the frame.

Round six saw both welterweights get in their fair share of licks. Ramos timed Perrella’s jab, shooting his right hand over the top to force the southpaw to the ropes. Perrella continued to work the stick, offering lateral movement in his best effort to avoid counter right hands. Ramos changed that trend, landing an overhand right just before the bell.

A left hook by Ramos forced Perrella to cover up to start round seven. Ramos continued to press the action, though not always effective as Perrella never lost sight of his pure boxing edge. It served the southpaw well in round eight, hooking off the jab and using every inch of the ring as Ramos reverted back to throwing one punch at a time.

With the fight slipping away, Ramos came alive in round nine. The 28-year old Arizona product allowed Perrella to come forward, catching him with a clean right hand which snapped back his opponent’s head. A left hook by Ramos landed close enough to the belt for Perrella to try—but fail—to sell referee Jack Reiss on a low blow.

Perrella came out firing his jab in the 10th and final round, while Ramos was clearly battling fatigue. Pawing right hands prompted Ramos to pull straight back, falling into the ropes even as the shots never came close to landing.

As it turned out, it merely lulled Perrella into a false sense of security.

Ramos never lost sight of trying to pull a rabbit out of a hat. It came in the form of a huge left uppercut which sent Perrella to the canvas in a heap. The Floridian beat the count but it was a race against the clock to make it the final bell, one he would badly lose. Ramos wouldn’t let him off the hook, sending him to the deck with a long right hand just as the 10-second clapper sounded.

Perrella was unable to steady himself long enough to convince Reiss to let him last until the final bell which was mere seconds away.

“I was rocked, but felt like I could’ve continued,” Perrella stated as his two-fight win streak comes to a close in falling to 17-3 (14KOs). “I mean, one second left. You gotta let me continue. It’s ridiculous.”

Perrella's frustration was understood on several levels, having led on all three scorecards - 88-83 twice and 87-84 - at the time of the stoppage. Had the fight gone to the cards, Perrella would've earned a majority decision win assuming all three judges scored the 10th round 10-7 for Ramos.

Instead, it goes down as a dramatic finish which provides Ramos with his eighth straight win as he improves to 26-3-2 (20KOs).

The bout appeared as the chief support of a Premier Boxing Champions (PBC) on Fox tripleheader, topped by Ashland City’s Caleb Plant in a homecoming super middleweight title defense versus Germany’s Vincent Feigenbutz.

[QUOTE=Wolfie*;20392712]People don't understand that a ref isn't a time keeper. They are trained to not care about the time, [B]rather than the safety of the fighter[/B]. He gave him a chance already by telling him to do something that he…

[QUOTE=byfbnz;20393381]reiss a consistant time keeper? tell that to wilder[/QUOTE] He's not a time keeper. Can you read?

Most times after a knock down, the ref will take a step back and say, "walk to me". Reis, pointing to the side, said "Walk there and come back to me". Big difference to a hurt fighter. Reis was protecting…

In this thread I learned it was Reis’ fault that Perrella was concussed and stumbling.

Ref must have had money on Ramos by stoppage. Should be investigated.