Covid-19 dropped boxing to its knees with a sucker punch in 2020 forcing the sport to take a prolonged respite in a neutral corner for much of the year. Down but not out, the sweet science came storming with a vengeance by mid-year. What the pandemic depleted in quantity of bouts was adequately compensated for by the quality of fights that did take place. All prominent Houston area boxers fought at least once in 2020 and, as the following awards will reveal, most acquitted themselves well on the world stage.

For the first time in six years, the race for Fighter of the Year deadlocked in a tie. Guess what? The co-winners also happen to share identical DNA and those genes proved dominant enough to procure the Fight of the Year, Knockout of the Year and Round of the Year awards.

Prospect of the Year is always a highly competitive category in a boxing Mecca like Houston and this year was no different. Comeback of the Year and Upset of the Year were weak categories this year simply because there were so few fights from which to select. Trainer of the Year was a no-brainer.

And the awards go to:

Fighter of the Year
Tie: Jermall Charlo and Jermell Charlo

Both twins, 30, turned out impressive performances on the same night but trying to determine which was better was like comparing apples to oranges since each was noteworthy for different merits. At 160, Jermall (31-0, 21 KOs) passed his sternest test to date with a clear but hard-fought victory over a talented and tough-as-nails Sergiy Derevyanchenko. Jermell (34-1, 18 KOs) unified three of the four major 154-pound titles by stunningly knocking out Jeison Rosario with, of all things considering the weapons in his arsenal, a jab to the body.

Besides reaching the finish line in unison for the 2020 top award, the twins are also just about neck and neck in terms of overall achievement at this juncture of their careers. But two things stand out that are too irresistible to not compare and contrast - their jabs and their highlight reel knockouts. Again, it's like apples and oranges.

Left Jab: When a fighter scores knockdowns against not one but three different opponents in world title fights with his jab, that's no fluke; it's one serious weapon. That's exactly what Jermall did against Cornelius Bundrage, Wilky Campfort and Julian Williams.  When a fighter not just knocks down but knocks OUT a double world titleholder with a double jab - first to the head then to the body - it's not just a serious weapon, it's seriously insane. But that's exactly what Jermell did to Rosario.

Highlight Reel KOs: Jermall's seemingly impossible and unprecedented 2016 catch-and-counter maneuver - blocking an incoming shot with the right glove and countering with the right uppercut - that sent Julian Williams crashing face first was simply a stroke of genius. By contrast, Jermell's upstairs-downstairs jab that deflated Rosario alongside the hybrid right hook/uppercut that froze Erikson Lubin in 2017 were simply freak-of-nature knockouts. Does that make him the evil twin genius? 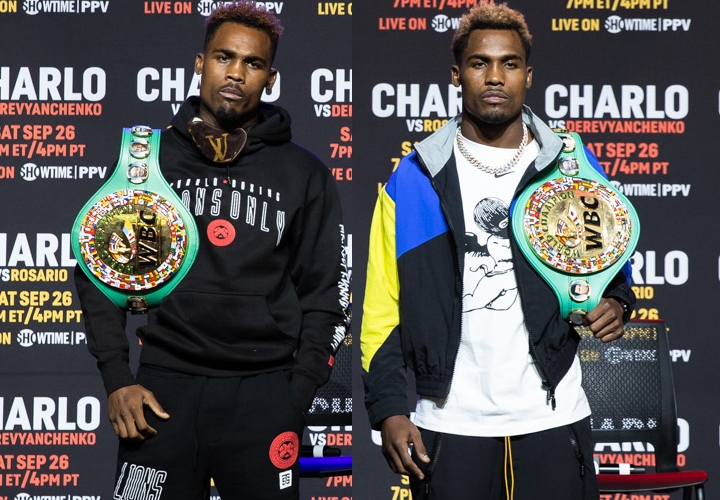 The scores of 118-110, 117-111 and 116-112 were fair but they failed to reflect the competitiveness of the scintillating battle at the highest of skill sets. The taller, rangier Jermall controlled the action from range but not by much, as Deveryanchenko was able to catch Jermall with hard jabs and counter punches. When Deveryanchenko managed to close the distance he got the better of the exchanges, but also not by much, as Charlo showed proficient and ferocious infighting ability. Both fighters were visibly rocked but displayed the aplomb and punch resistance to shake it off and storm back.

At the end of the day, it was Jermall's superior combination punching that tilted the balance. Jermell unleashed three or four shots at a time while Deveryanchenko was limited to one or two. And by mixing long and short punches in rapid-fire sequence, he dictated the price of real estate and kept the cagey Russian guessing all night.

It was a bold statement-making victory for Jermall. The 12 grueling rounds with Deveryanchenko was a precious mettle detector - gut check, chin check and IQ test rolled into one -  and Jermall registered gold and platinum on all counts. But most importantly, Jermall had convincingly defeated a fighter that both Gennady Golovkin and Danny Jacobs barely squeaked by.

Jab to the body, jab to the head is one the most basic combinations taught to all beginners. it is typically used in the amateurs to score points and in the pros to set up the straight right. Rarely is the reverse sequence - jab to the head, jab to the body - ever utilized in either the amateurs or pros. And almost never does it result in a clean knockout. But that's how Jermell retained his one alphabet belt while seizing two from Rosario.

Jermell scored knockdowns in rounds one and six, both with left hooks to the head. Rosario rose from the first without trouble and on shaky legs from the second, but still comfortably beating the count. Early in the eighth round, Charlo pumped a double jab, first to the face then to the body, the latter of which was partially deflected by Rosario's elbow. Rosario hit the deck like he was struck by a cannonball, writhing in agony and gasping for air for the full ten count and then some.

The knockout was not only devastating and conclusive but atypical and bizarre.

When Apochi moved to Houston from Nigeria to train under Ronnie Shields in 2017, he knew he needed to hit the ground running. He began boxing at 19 and turned pro at the ripe old age of 29. With no time to lose, he embarked on a frenetic fight schedule averaging a fight every three months from 2017-2019, stopping every opponent along the way. Unfortunately, the Covid-19 pandemic presented a massive speed bump in his race up the ranks curtailing him to just one fight in 2020. But it was televised on Fox Sports and Apochi made the most of it; he dropped Joe Jones (11-3, 8 KOs) three times en route to a third-round TKO, raising his record to a perfect 10-0 (10 KOs).

At 5-foot-11, Apochi is a tad on the short side for a cruiserweight by today's standards. But guess what? His role model just happens to be Mike Tyson who, at that same height, not only dominated but almost decapitated many a taller and longer man. Not only does Apochi's body type resemble Iron Mike's, his peekaboo, bob-and-weave style is eerily reminiscent of the man he grew up idolizing. As his record suggests, Apochi packs numbing power in both fists but he can also box effectively if he so chooses.

Tyson was the youngest boxer to capture a heavyweight title and he dominated the division with crushing brutality. Apochi aspires to follow in his footsteps in the cruisers, but from the opposite end of the age spectrum.

Round of the Year
Jermell Charlo vs. Jeison Rosario, round 6

Jermell scored a flash knockdown in the opening round and was clearly the more educated fighter of the two. But what Rosario lacked in finesse, he made up for in aggression and moxie. He applied suffocating pressure, punching with wicked intentions from both sides upstairs and down from rounds two to six. But just before the bell ending round six, Jermell countered a Rosario charge with a perfectly timed check hook to the chin that turned his legs into spaghetti as he crumpled to the canvass.

The punch seemed to snap Rosario's will power and sap him of his punching power as he visibly faded in the seventh round. Jermell dramatically ended the fight with the double jab for Knockout of the Year in the eighth round. But that likely wouldn't have happened without the momentum-changing sixth round,

Comeback of the Year
Regis Prograis

Returning to action after his loss last year to Josh Taylor (2019 Fight of the Year), Prograis (25-1, 21 KOs) scored a third round TKO over previously undefeated Juan Heraldez (16-1-1, 10 KOs) at the Alamodome in San Antonio. Prograis would've liked to have fought a bigger name for his comeback but after negotiations fell through with Maurice Hooker (twice) and Pablo Cesar Cano, he had to settle for the unheralded Heraldez. Nevertheless, it was a resounding win in front of a global audience on the Davis-Santa Cruz undercard.

Valencia (16-5-6, 5 KOs) outpointed Cruz (20-3, 6 KOs) in an entertaining give-and-take shootout in Mexico on Dec. 9. Cruz entered the ring riding a six-fight winning streak while Valencia had lost three of his last five fights. Cruz started strongly but Valencia, a southpaw, gradually figured him out and timed him with the cleaner, sharper punches for most of the rounds.

Cruz, a right hander, had outpointed Diuhl Olguin, also a right hander, 11 days prior to fighting Valencia, leaving himself little to no time to make adjustments for a lefty. In addition, Cruz actually turned himself left-handed in the gym to spar with stablemate Miguel Flores who was preparing to take on southpaw Eduardo Ramirez on the Dec. 5 Spence-Garcia undercard. To say that Cruz might have spread himself too thin in the weeks leading to the upset is probably an understatement. But then again, we're talking about an Energizer Bunny who recently fought on a Saturday night in San Antonio and then ran a full marathon the following Sunday morning in Houston.

Trainer of the Year
Ronnie Shields

Shields was the only Houston-area trainer to have been in the corner of the winner of a world title fight in 2020. He had a major supporting role in the Fighter of the Year, Fight of the Year and Prospect of the Year awards. Add Erislandy Lara, who was 1-0 in 2020, into the mix and Shields wins the award by a virtual shutout.

I’m waiting for the Portland awards or Boston even