Houston area boxers went 4-2 in world title fights in 2019. The fourth largest city in the country began the year without a world titleholder but ended with two, both of whom share identical DNA. One regained the world title he controversially lost last year with a sensational late-round KO in the rematch and the other was awarded an alphabet belt without a fight, the result nonsensical, off-the-cuff policy changes by the sanctioning body. 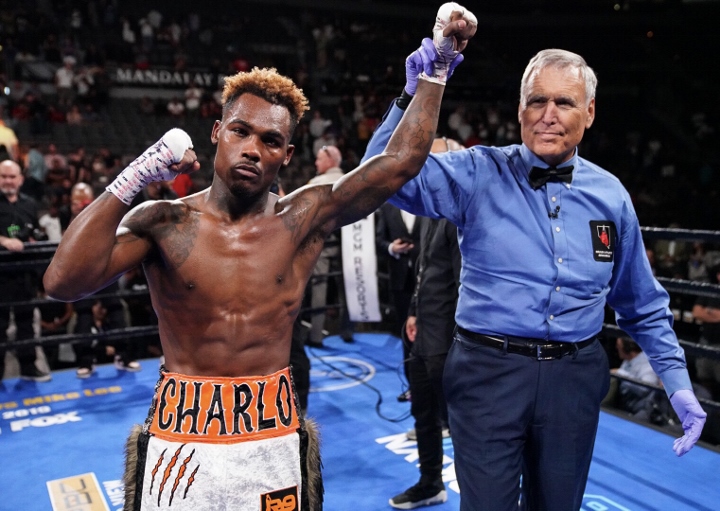 And the awards go to:

Fighter of the Year: Jermell Charlo

Jermell Charlo went 2-0 (2 KOs) in 2019 edging out his twin brother for the top award on the strength of his electrifying 11th-round knockout of Tony Harrison to reclaim his 154-pound alphabet belt in the highly-anticipated rematch. Harrison had wrested the title from Charlo via controversial unanimous decision in last year’s Upset of the Year. The momentousness of the grudge match was further heightened by the urgency with which Charlo scored the knockout.

Except for a flash knockdown Charlo (33-1, 17 KOs) scored in the second round, the fight played out like a continuation of the first fight. Charlo loaded up with haymaker rights and wide left hooks while Harrison (28-3, 21 KOs) boxed behind a high guard and periodically caught Charlo coming in with stiff one-twos.

In the eighth round, Charlo began working his jab overtime which gradually chipped away at Harrison’s defense and created openings. Harrison defiantly showboated each time he got nailed by a power punch, a telltale sign he was buzzed.

In the eleventh round, with the fight dead even, Charlo buckled Harrison’s knees with a left hook and followed up with a right hand-left hook that dropped Harrison. Harrison beat the count only to be bombarded by a double-fisted barrage that dropped him against the ropes. Harrison struggled to his feet but the writing was on the wall. Charlo quickly pinned him against the roped and unloaded with both hands prompting the referee to intervene and call a halt.

Earlier in the year, Charlo blasted out Jorge Cota in three rounds. Cota was a last minute replacement for Harrison who pulled out due to an ankle injury. That fight was inconsequential save for the fact that it was a strong contender for Knockout of the Year.

It’s seldom that a superfight exceeds its hype but Taylor-Prograis sure did. Not only did the fight win the Houston Fight of the Year award, it made the shortlist for most worldwide FOTY lists.

It couldn’t get more high stakes than this. Both Taylor and Prograis had won 140-pound alphabet titles in the semifinals of the WBSS tournament and the RIng Magazine title was on the line in addition of their respective belts. For the winner loomed a lucrative super showdown loomed against Jose Ramirez, holder of the remaining two belts, for the undisputed championship.

The two southpaws dispensed with any feeling out process and let their fists fly with wicked intentions from opening to final bell at the 02 Arena in London. But it was more than a Gatti-Ward-like slugfest. Both fighters showed their versatility and IQ, deploying jabs, combinations, counter punches and slick defensive skills.

For 12 action-packed rounds both fighters ripped murderous punches at each other upstairs and down, shots that had dropped or stopped their respective previous opponents. That there were no knockdowns was a testament to each fighter’s tank-like punch resistance. Prograis had a slight edge early on while Taylor found his groove in the middle rounds. The already-torrid pace was taken up a notch in the championship rounds, each fighter trying to pull ahead at the finish line.

Ironically, it was defense that ultimately tipped the balance in such a heated battle. Prograis held his gloves low while Taylor made himself a difficult target with a high guard. Prograis often made Taylor miss with zippy head movement but rarely made him pay. Taylor caught many incoming blows on his arms and gloves and returned fire with counters. Most significantly, he often killed Prograis’ offensive momentum with should blocks.

A switch-hitter, Foster (17-2, 10 KOs) alternated between right-handed and southpaw to tactically circle and stab Bravo (19-2, 17 KOs) with left and right jabs. In the seventh round, Foster began engaging Bravo on the inside, emboldening Bravo to come forward and let his fists fly.

But it was a trap; as Bravo became more aggressive, he was opening himself up to counter punches. Late in the eighth round, Foster baited Bravo into throwing a one-two, took half a step back and fired a perfectly-timed straight right. Like a sniper’s bullet, it caught Bravo smack on the point of his chin separating him from his senses before he hit the canvass. Bravo had never previously been stopped.

Prospect of the Year: O’Shaquie Foster

In 2019 junior lightweight Foster went 3-0 (2 KOs) against opponents with a combined record of 63-15-5, which included the Knockout of the Year award.

Foster (17-2, 10 KOs) began the year with a homecoming fight stopping Fatious Fassinou in the third round in his native Beaumont in February. He ended the year winning a 10-round unanimous decision over Alberto Mercado.

Sandwiched between those two bouts, Foster, 26, stole a page from Evander Holyfield’s playbook with the Knockout of the Year over Jesus Bravo. Luring Bravo in, Foster made Bravo miss by talking a half step back and exploded with a counter right to the chin that dropped Bravo face first for the full count. It was eerily reminiscent of Holyfield’s KO of Buster Douglas in 1990.

Comeback of the Year: Miguel Flores

At first glance, it would be difficult to justify awarding Comeback of the Year to a boxer who went 1-1 (1 KO) in 2019, especially since it was on account of his loss. But Flores (24-3, 12 KOs) beats out all other candidates for this award after taking into consideration the near-rock bottom abyss from which he was coming back from and the elite caliber of the fighter to whom he lost.

After winning the 2016 Prospect of the Year award, Flores had a disastrous 2017. His status dipped from undefeated to having two back-to-back stoppage losses on his record. First he was TKOed in his hometown by Dat Nguyen, an inactive and unheralded 19-3 fighter. Later that year, he was stopped controversially on cuts to Chris Avalos despite dropping Avalos and winning every round prior to the ruling.

Hampered by several fights that fell through and an ankle injury, Flores only managed to notch two wins against journeymen in the two years following the Avalos loss. But a glimmer of hope flickered midway through the year when he was offered a stepping-stone role against future hall of famer Leo Santa Cruz for a vacant 130-pound alphabet belt on the co-main event of Deontay Wilder-Luis Ortiz II.

A former world titleholder at 118, 122 and 126 pounds, Santa Cruz (37-1-1, 19 KOs) was expected to steamroll through Flores for his fifth world title in four weight divisions. But Santa Cruz had his work cut out for him as a determined Flores fought with brain, brawn and bravado. Strategically alternating between boxing and brawling, Flores forced Santa Cruz to dig deep into his reservoir of experience and guile to win a unanimous decision. It was more a testament to Santa Cruz’s talent and pedigree than an exposé of Flores’ shortcomings.

Despite adding a third “L” to his record, Flores’ strong showing against such a decorated fighter on such a big stage did more to raise his profile and stock than any number of wins against obscure opponents in equally obscure locales.

Upset of the Year: Xu Can W12 Jesus Rojas

Their pre-fight records said it all: Can was 15-2 (2 KOs) and Rojas was 26-2 (19 KOs). An unknown boxer from China with a less-than impressive record, Can was supposed to be a stay-busy fight, an easy defense of Rojas' alphabet featherweight belt. Even less impressive than Can's overall record was his dismal 12 percent knockout rate.

But what Can lacked in power, he more than made up for in volume punching and uncompromising tenacity. Cheered on by a sizable contingent of Chinese fans at The Toyota Center, Can turned himself into the Energizer Bunny, throwing punches in bunches, forcing Rojas to constantly set and reset, for the entirety of the fight. Rojas stood his ground well and returned fire with gusto but it was Can who usually got in the first and last blows of the exchanges. At the end of the torrid battle, Can won by scores of 117-111, 116-112 and 118-110.

Can’s subsequent title defenses - TKO6 Shun Kubo (13-1, 2 KOs) and W12 Manny Robles (18-0, 8 KOs) - suggest his upset of Rojas was no fluke. Might he be one of those Rocky Balboa stories who was plucked from obscurity for a once-in-a-lifetime opportunity and made the most of it? What Can does in the 2020s will answer that question.

Round of the Year: Efe Ajagba vs. Iago Kiladze (round 3)

It seemed like just another routine day at the office for the streaking heavyweight Ajagba (12-0, 10 KOs) who had connected fluidly with jabs and straight rights, one of which dropped Kiladze in round two. Kiladze (26-5-1, 18 KOs) was 0-4-1 in his last five fights.

Ajagba, 25, appeared to have Kiladze out on his feet in the third round as he continued to spear the Georgian with ramrod rights. As Ajagba continued to press the action, Kiladze, out of nowhere, unleashed a desperation right to the chin that dumped the 6-foot-6 Nigerian heavily to the canvass for the first time in his career. Dazed but unfazed, Ajagba got to his feet and jabbed and moved to make it out of the round.

Ajagba shook off the cobwebs to continue to dominate and eventually stop Kiladze in the fifth round. But that shocking, near-disastrous third round was his sternest gut and chin check at this juncture in his promising career.

For the second year running Trainer of the Year ends up as a tie between Shields and the team of Benton and Navarro.

Shields went 2-0 in world title fights, both with the same fighter. In June, Jermall Charlo (30-0, 22 KOs) won a near shutout decision against Brandon Adams at the NRG Arena. Charlo returned to action in December dropping Dennis Hogan twice en route to a seventh-round TKO. Shields was also in Efe Ajagba’s corner for the Round of the Year award.

[QUOTE=TrillScottHeron;20308938]The southern part of the US has the best athletes in the world irrespective of sport. If Mighty Mo Hooker (or Regis) can bounce back and become champion again @ SLW Texas will reign over 4 divisions at once.[/QUOTE] That…

The southern part of the US has the best athletes in the world irrespective of sport. If Mighty Mo Hooker (or Regis) can bounce back and become champion again @ SLW Texas will reign over 4 divisions at once.