20 Boxing Places To Visit When This Pandemic is Over

Boxing has a rich history. We wish more could have been done to salvage the Kronk, to make sure we don’t lose our history before it’s too late. There’s often a call for a Hall of Fame in the UK. There was a hugely popular pop-up Muhammad Ali exhibition at London’s O2 Arena a few years ago but there are places and things to see that will either be there forever or won’t be for much longer. Here, in no particular order, are 20 sights for fight fans to visit once this period of self-isolation due to coronavirus is over. 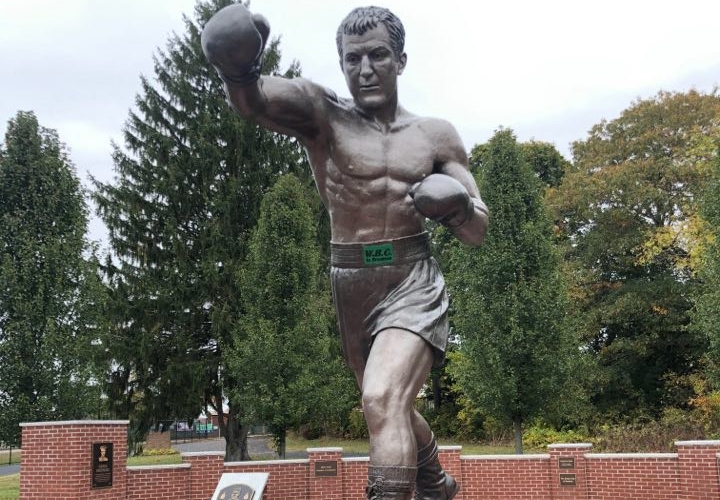 The bronze statue of Rocky Marciano in Brockton is a sight to behold. It was unveiled in September 2012 and is at Champions Park. It’s huge, not just your everyday boxing statue. One of Brockton’s favourite sons has been immortalised with this giant 20ft likeness of one of the all-time great heavyweights, who retired undefeated, 49-0.

Jimmy Glenn has been hospitalised with coronavirus but his dive bar just off Times Square is a boxing must. Pictures of Jimmy with a who’s who of champions and contenders and fight posters line the walls and boxing discussion is everywhere. The drinks are cheap, too. Get well soon, Jimmy.
If you’re hungry, walk down or grab an Uber to Jack Dempsey’s for food.

Stillman’s has gone. The 5th Street has been redone. There aren’t too many of the great old gyms left. Tocco’s in Las Vegas is still there, with its brilliant external wall murals of Rocky Marciano, Salvador Sanchez and Muhammad Ali, Tocco’s has been a home to, among many others, champions from Sonny Liston to Mike Tyson.

Lore has it that Mike Tyson cracked a bottle of champagne open above the solitary footstone that simply reads ‘A Man’, in kinship with his fellow misunderstood heavyweight champion. Sonny lies in the Paradise Memorial Gardens, under the flight path of planes coming in and out of Sin City.

Another Ali landmark is now called Fighter’s Heaven and has been updated and preserved by Mike Madden, son of football coach John Madden. He’s invested heavily in trying to recreate Ali’s old training camp as it once was, and a visit should be on any fight fan’s bucket list.

The International Boxing Hall of Fame is unique. Induction weekends are tremendous gatherings of fighters, trainers, fans, historians and more, united by their love of the sport. You get to meet champions, you can dine with legends, play golf with them, go to one of the world’s largest boxing memorabilia fares and tour their wonderful museum. This year’s June induction has been postponed 12 months, so 2021 will be huge with a double induction class.

Many British boxing greats have boxed here, so have a few travelling stars, including the late Johnny Tapia. It’s in many ways boxing’s spiritual home, certainly in British boxing, with the balcony overlooking the ring helping provide a unique setting and atmosphere. It’s unforgivingly hot in the summer.

12. A trip around Philadelphia

Philly in boxing might not be what it was in the roaring ‘70s, but while Joe Frazier’s name remains above the furniture store and the painting of heavyweight greats on the side of the Blue Horizon remain, you should go. Of course, you can see the sights from the Rocky movies, see the Rocky statue at the foot of the famous Art Museum staps and go and see Joe Frazier’s statue near the sporting stadiums, too.

Rich Marotta is doing a fine job giving fight fans something else to do in Vegas while they’re in town for big fights. Check out the NBHOF, a short ride from The Strip and look around their interactive exhibit. There are often guests on hand during fight week and Michelle Corrales-Lewis, Diego’s widow, helps run it. It’s inside HeadzUP at the Boulevard Mall. You can visit Diego’s gravesite at the Palm Memorial Park.

One of the great British boxers of all time, Randolph Turpin, has been celebrated for all time with a statue in Market Place in Warwickshire. It was unveiled by Henry Cooper and Jack Turpin in 2001.

Take a tour of The Garden, go behind the scenes, go to the dressing rooms, see where Joe Frazier and Muhammad Ali tore it up in 1971 and where John Ruiz and Fres Oquendo put thousands to sleep in 2004.

8. Pay your respects to Joe Louis

Arlington Cemetery is the resting place of the Tomb of the Unknown Soldier and the Kennedys among thousands of others. It’s also where Joe Louis is, because of his service through World War II and, since he died in 1981, millions have paid homage to one of the all-time great heavyweights.

It’s a morbid curiosity but heavyweight champions Jack Johnson, from Galveston, and Cornishman Bob Fitzsimmons have both been laid to rest in the same cemetery in Chicago, Illinois.

Freddie Roach is often home for starters, working long days and full hours and it’s probably the most famous working boxing gym today. With many fighters choosing to train in private compounds or behind closed doors, the Wild Card – where you can pick up plenty of gym merchandise – is somewhere every fight fan should visit.

At its 1980s and 1990s height, it was home to scores of champions. Through the years, they’ve diversified their class timetable but Gleason’s remains iconic. Bruce Silverglade is one of the sport’s stalwarts who has kept this famous New York institution alive in Brooklyn for some 30 years. Gleason’s was founded in 1937, Duran, LaMotta and Ali are among the 131 world champions who have trained there.

4. The Gans-Nelson plaque in Reno

On a wall in Goldfield, Nevada, sits a plaque that marks the 42 rounds of brutality that took place there on September 3, 1906 between Joe Gans and Battling Nelson.

You can pay homage to the greatest fighter who ever lived at the Inglewood Park Cemetery in California. Walker Smith died aged 67 in 1989 and he shares a resting place with his widow, Millie, who died in 1995. It says ‘Our Champion’ on his headstone. ‘God loved you and I will… Always forever your wife.’

For years after Mike Tyson shot to fame, the gym still thrived with Kevin Rooney at the helm. These days, and after an extensive refit, it’s still worth a visit to step in the footsteps of the great eccentric, Cus D’Amato, and to feel those storied times when the likes of Floyd Patterson, Jose Torres, Teddy Atlas, Steve Lott, Bill Cayton and Jim Jacobs were stars in one of the sport’s most famous storylines.

Some said it was demeaning that Joe Louis, the great former heavyweight king, wound up as a greeter in a Vegas casino. However, there are many that said he enjoyed the work, the recognition and the fact that it gave him some income when the IRS had cynically cleaned him out. Joe is still there now, in marble, looking out onto rows of slot machines, a full-time role in a 24-hour show greeting Sin City visitors as they walk by.

I'm all for the Rocky statue. He's one of my favorite fighters of all time, well known for his extraordinary determination, punching power, conditioning and stamina. BUT... was his body really chiseled like that? It's hard to tell from the…

There's a big Joe Louis fist sculpture in downtown Detroit. Also, something quite unique about his gravestone in Arlington Cemetery. If the sun hits it at a particular angle, there is a figure of Joe Louis that shines out of…

MSG was ok. First time I went to NY (nearly 20 years ago) I was baffled how it was named when the building is round.. of course a little history lesson told me it's the location.. Not fussed with Vegas,…

[QUOTE=GlassJoey;20537354]It’s the only venue that encapsulates the feeling of watching a fight in a pub [/QUOTE] Except the actual pubs in Hungary that Prince Patel fights at