The card, which was going to be televised by CBS Sports Network, would have featured the return of former two division world champion Zab Judah, who would have faced Josh Torres at a catch-weight of 143-pounds. 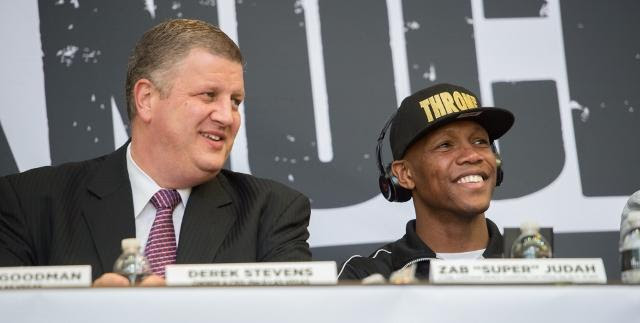 According to the Executive Director of the NSAC, Bob Bennett, Judah and Englebrecht claimed that there were no current financial liens against the boxer - but Bennett learned that Judah owes child support.

“Per NRS 467.117, we temporarily suspended Mr. Judah and Mr. Englebrecht late Thursday after it was confirmed they had provided a false licensing document,” Bennett said to the Las Vegas Review Journal.

“I met with (NSAC) chairman (Anthony) Marnell and we’re not going to compromise our integrity or the integrity of the sport for people who provide false information.”

Judah and Engelbrecht will have to appear before members of the NSAC at a disciplinary hearing on March 23.

Bennett is not pleased with the actions of Judah and Engelbrecht.

“The other fighters don’t get to fight; the fans who bought tickets don’t get to see the fights, Mr. Stevens put a lot of time and effort to have his facility ready as did our office to handle all the paperwork,” Bennett said. “We all lost out.”

Is a promoter supposed to know about a boxers child support situation? That seems like an impossible thing to track. I gotta believe Englebrecht gots something else going on here than that or did I miss something in that story???…

[QUOTE=el***;16531234]The fking stupid thing is... he owes child support... well how does he get paid? BY FIGHTING. So they cancel his fight and now he isnt getting paid. Isnt the whole point of a lein that they can take the…

This was Jim Ross's debut also. So are the fans getting their money back? I don't know, honestly, the NSAC looks worse than Judah right now. Great timing, why waste everyone's time and do this last minute? That's messed up…

Water Hot The Water Is Hot Hot Like Lava

[QUOTE=el***;16531234]The fking stupid thing is... he owes child support... well how does he get paid? BY FIGHTING. So they cancel his fight and now he isnt getting paid. Isnt the whole point of a lein that they can take the…