Yuriorkis Gamboa: My Obligation is To Win, Then I Want Juanma

Yuriorkis Gamboa was animated earlier this week regarding Juan Manuel Lopez. The way Gamboa was speaking of Lopez, it may have seemed a fight was taking place this weekend.

Both are fighting tonight, but they will face separate opponents. Should both win, a fight is penciled between the two fighters next year.

Gamboa will face Miguel Beltran of Mexico in a 12 round bout at the Miami-Dade County Fair and Expo in Miami, Florida. In the co-feature, Lopez will square off in a 10 round bout against Argentina's Cristian Mino. 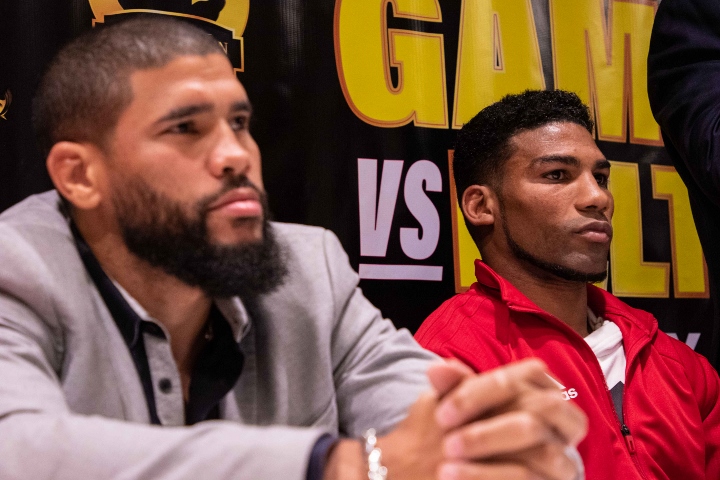 The New Champions Promotions card was originally scheduled to take place at Marlins Park, home of the Miami Marlins, but was moved across town reportedly due to slow ticket sales.

Gamboa (28-2, 17 knockouts) resides in Miami and will have a partisan crowd in his favor. Like Lopez, he has mixed results over his last several fights and is not amongst the elite of the junior lightweight division.

The 36-year-old Gamboa has not fought since Nov. 25. Gamboa overcame a knockdown in round seven and a point deduction to win a 10 round majority decision over former 130-pound world titleholder Jason Sosa.

Despite suffering knockout losses to Terence Crawford (2014) and Robinson Castellanos in May of last year, Gamboa's fan-friendly style does appeal to hardcore fans. A loss would derail any attempt to fight for a world title belt, which makes to tonight's important and compelling.

Then there is a possible fight with Lopez, a fight Gamboa believes is inevitable.

"The comment that JuanMa had made earlier that I may be running or I may be ducking - that is false," said Gamboa. "He knows he is contractually obligated to New Champions for two fights - the second fight would be, if we both win, a fight between me and him."

"By all means, I know my obligation and I know his obligation. My obligations right now is to win on Nov. 10. After winning Nov. 10, I want JuanMa."

The southpaw from Caguas, Puerto Rico has lost three of his last four bouts, and there have been calls for him to hang up his gloves.

A Gamboa-Lopez fight would have been compelling had the it taken place five to six years, while both fought under the Top Rank banner. The fight does have appeal, especially to Lopez.

"Obviously most important to me personally is to win this fight (against Mino) and potentially set up the next fight against Yuriorkis Gamboa, which has been a fight that has kind of eluded both of us."

"The fight (for tonight) was done with the idea and the plan that we both get featured on a card and we fight and win and fight each other. Hopefully he sticks to the plan."

Rounding out the pay-per-view telecast will be two eight round bouts.

Welterweight Harold Calderon, who is of Honduran descent and resides in Miami, will face Emiliano Martin Garcia (16-2, 13 KOs) of Argentina.

Francisco A. Salazar has written for Boxingscene.com since September of 2012 and has covered boxing in Southern California and abroad since 2000. Francisco also covers boxing for the Ventura County (California) Star newspaper. He can be reached by email at [email protected] or on Twitter at FSalazarBoxing