Yuriorkis Gamboa Gets Off The Floor, Wins Decision Over Sosa

NEW YORK – It was far from pretty, but Yuriorkis Gamboa overcame two point deductions and a determined Jason Sosa on Saturday night.

The former three-division champion won a majority decision in their 10-round lightweight fight on the Sergey Kovalev-Vyacheslav Shabranskyy undercard in The Theater at Madison Square Garden. Judges Don Trella (96-92) and John McKaie (95-93) scored the highly competitive fight for Gamboa, but judge Robin Taylor had it even (94-94).

Trella only credited Sosa with winning one round, the seventh, in the entire fight. McKaie scored seven rounds for Gamboa and Taylor had him winning six rounds, three fewer than Trella. 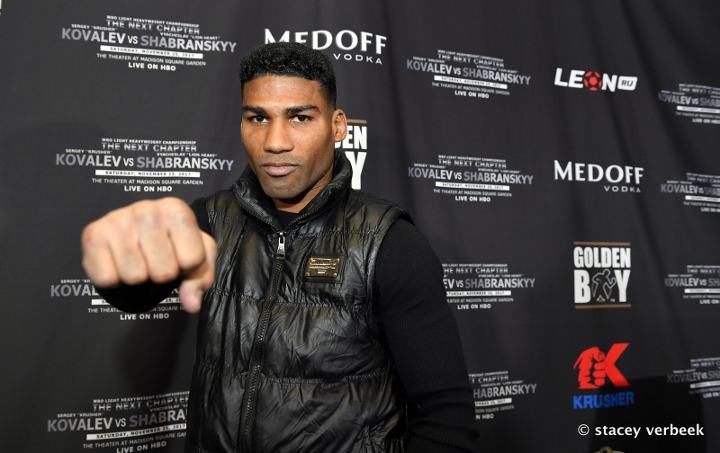 Unofficial CompuBox statistics indicated that the fight was very close.

The 35-year-old Gamboa (28-2, 17 KOs), a 2004 Olympic gold medalist for Cuba, bounced back from a technical knockout loss to Mexico’s Robinson Castellanos on May 5 in Las Vegas.

Sosa was supposed to fight Castellanos (24-13, 14 KOs) on Saturday night, but Gamboa replaced Castellanos once Castellanos withdrew due to a back injury.

Gamboa started the 10th round strong, as he hit Sosa and moved out of harm’s way repeatedly. But referee Ron Lipton took a point away from Gamboa for excessive holding with 1:22 left in the fight.

Lipton had warned Gamboa numerous times throughout the fight for holding, hitting on the break and hitting low.

About 40 seconds into the ninth round, Sosa landed a straight right hand that wobbled Gamboa and made him hold. A Gamboa head-butt slowed Sosa down soon thereafter.

Sosa continued to hammer away at Gamboa’s body in the eighth round, but Gamboa landed enough to make the round competitive.

Sosa scored a knockdown less than 20 seconds into the seventh round, when Lipton credited him with hitting Gamboa with a left hook. The punch didn’t appear to land, but both of Gamboa’s gloves touched the canvas as he tried to remain on his feet and Lipton called it a knockdown.

Later in the seventh, Sosa connected with two straight right hands to the head and a left hand to the body that seemed to bother Gamboa.

Sosa drilled Gamboa with a left hook with 1:10 to go in the sixth round, in which there was a lot of holding by both fighters. Gamboa moved, made Sosa miss several times and landed occasional right hands against Sosa in the fifth round

Gamboa connected with two left-right combinations around the midway mark of the fourth round, in which his hand speed troubled the slower Sosa. But Sosa broke a clinch later in the fourth by connecting with a right uppercut.

Sosa and Gamboa exchanged left hooks late in the third round, but both boxers took those shots well.

Gamboa slipped and landed flat on his back approximately 20 seconds into the third round. He fell to the canvas again later in the third.

Gamboa landed an overhand right to the top of Sosa’s head and followed it with a left hook to the body late in the first round.

[QUOTE=Bjl12;18324300]Yet your HBO commentators - the ones you cited as a to backup your horrible robbery stories - sided with the Pacman in the 3rd JMM fight...while it is universally accepted that JMM won that fight - and CLEARLY. Something…

[QUOTE=daggum;18324324]no its not. i think you might be in your boxingscene bubble. most people thought it was super close. yes some loud people on boxingscene might yell and scream but its not like ggg-canelo which everyone there and almost every…

[QUOTE=Bjl12;18324300]Yet your HBO commentators - the ones you cited as a to backup your horrible robbery stories - sided with the Pacman in the 3rd JMM fight...[B]while it is universally accepted that JMM won that fight - and CLEARLY. Something…

[QUOTE=Mr. Punch-Out!!;18324213]Man, talk about a change of heart. You're claiming Marquez won the 3rd fight despite scorecards having Pacquiao winning it? Seems like you're learning already. Boy, that was quick. :D[/QUOTE] Yet your HBO commentators - the ones you cited…

[QUOTE=Bjl12;18324155]You mean Jim Lampley and Harold Lederman? Those commentators? Are people supposed to side with them? The same guys that had Manny Pacquiao beating JMM in the 3rd and 4th fights? The 4th fight where Pacman got KTFO. And the…